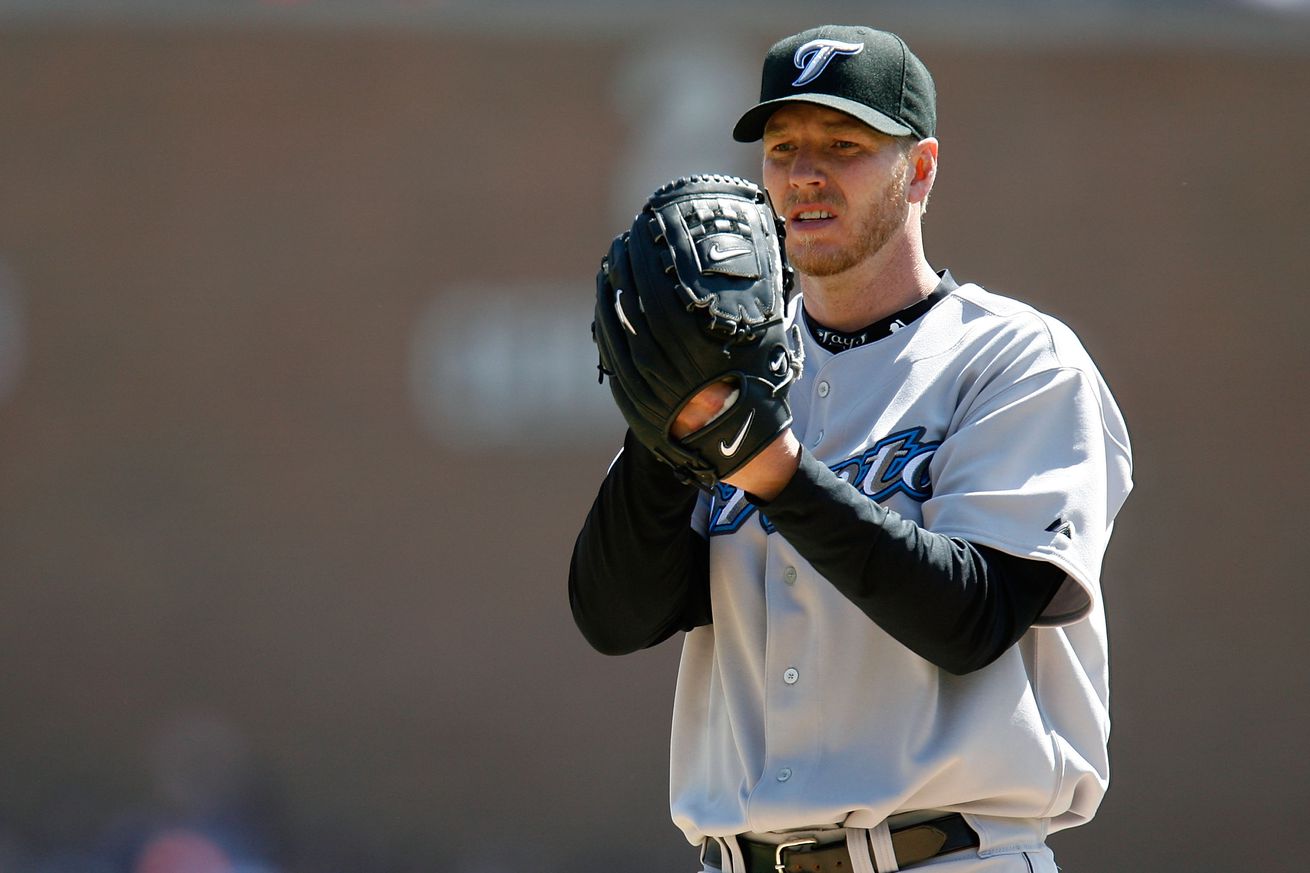 Roy Halladay would have turned 42 today.

Roy, was either the best or the second best Jays starter of all time, depending on who you ask, but there is no doubt he and Dave Stieb are the 2 best starters in our history. In my mind, Stieb was the best AL pitcher of the 1980s and Halladay was the best AL pitcher of the ‘aughts’. Doc is second on our franchise wins list at 148 (Stieb had 175), second in BWAR at 48.5 (Stieb 57.2), third in starts at 287 (behind Stieb 408 and Jim Clancy 345).

Roy won 2 Cy Youngs (one as a Jay, one as a Philly) and finished in the top 5 in voting 5 other times and he was a member of 8 All-Star. For many of the years that he was a Blue Jay, he was one of the few bright spots on a rather average team. I always looked forward to his starts. Beyond all the ability, he was a competitor. On days he was going to pitch, he was locked in. Teammates and, especially, press didn’t talk to him. He kept focused on the job at hand.

His death made me sadder than it really should have. I was depressed for days. It is funny how the death of a person I never met could effect me so much. He was too young and he was enjoying retirement so much.

Doc gets inducted into the Baseball Hall of Fame July 21st this year. I’m thinking I might go for the ceremony, I’m not sure when the next Blue Jay will make the Hall, but I doubt it will be anytime soon. The only downside is that Roy won’t be there to give his speech.

Pat Borders turns 56 today. Borders was never a great player or a great hitter. He only had one season as a Jay where he hit better than average. In 1990 he had an OPS+ of 120 and a batting average of .286 with 15 home runs and his only on base above .300 (.319) in his time as a Jay. His Jay career offensive win percentage is .458. He did have decent power, if he could have learned to take a walk it would have helped. But he was a tough catcher and a good handler of pitchers. He had a decent arm but was never really a candidate for a Gold Glove.

Pat played 747 games for the Jays, putting him second in games played by a catcher to Ernie Whitt. And he would play for 8 other MLB teams. He was still playing ball at age 42.

Likely most of you remember that he was the World Series MVP in 1992 and Jay’s fans owe him a beer or two for that alone. I’m sure, if he wants, he could have a career as a coach or manager somewhere, but after a 17 year major league career he deserves to relax after wearing the ‘tools of ignorance’ for so long. He always seemed like one of the guys you’d like to talk to. Just a good guy, hard worker.

One other birthday I have to mention is Dennis Martinez, who turns 65 today. Dennis was never a Jay, in his 23 year career, but he did spend 8 years as an Expo. He has 245 wins to his credit, but one I’ll never forget is the perfect game he threw against the Dodgers in 1991. Dave Van Horne who was, I guess still is (he does the Florida Marlins games), a terrific play-by-play commentator did a great job at the end saying “El Presidente, El Perfecto”. He was a very popular pitcher, he beat alcoholism to become one of the best pitchers of his time.

Hosken Powell, who turns 64 today. Powell had a 6 year MLB career, 4 with the Twins and the last 2 with the Jays.