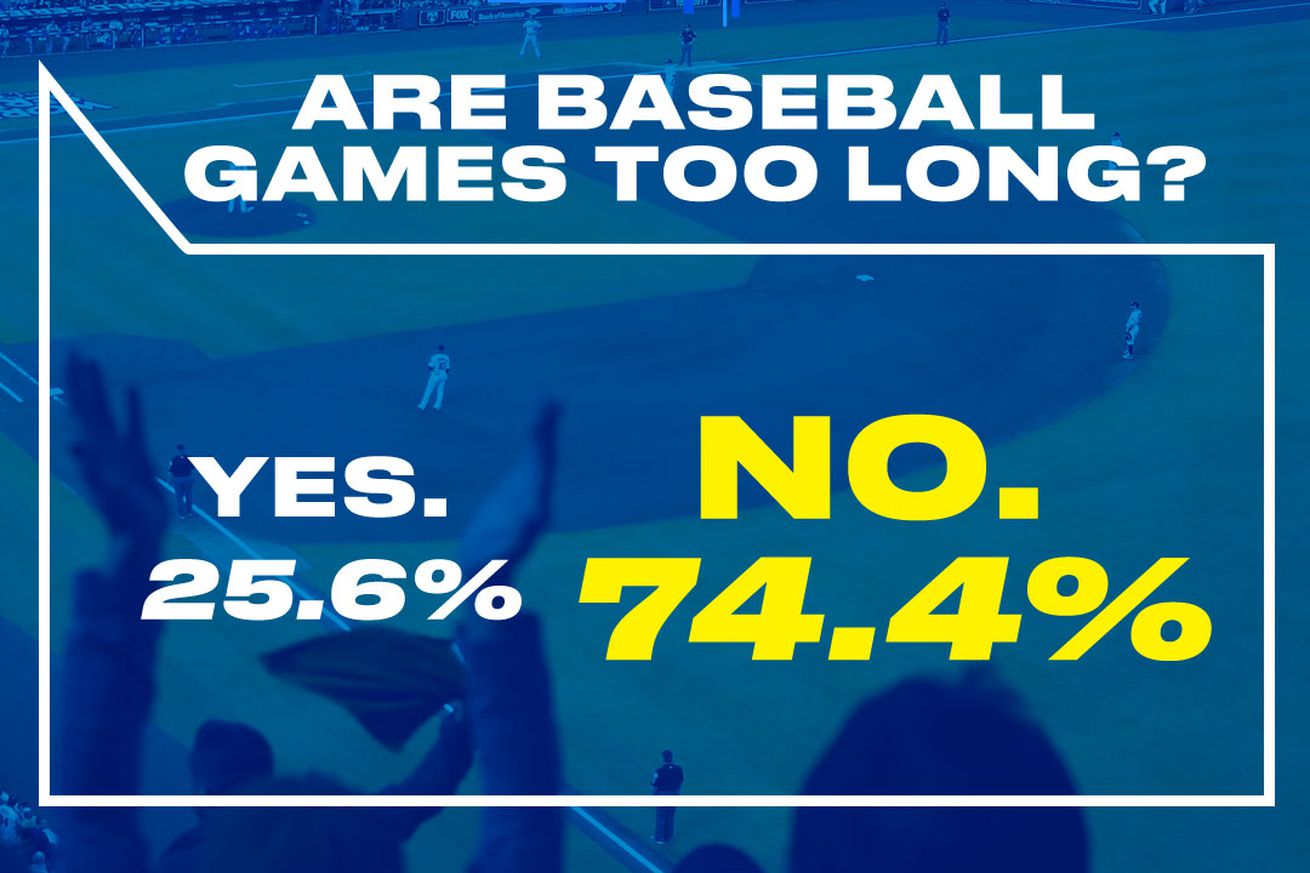 This week’s national FanPulse asked if baseball games are too long. 74.4% voted no.

It is an interesting question because if you had asked me in the sixth inning of last Wednesday’s Blue Jays 9-1 lost to the Twins, let’s say right when Randal Grichuk was swinging at a pitch two feet off the plate for his third of four strikeouts on the day, I would have answered YES GAMES ARE TOO LONG.

But then, if you asked me Tuesday when Vlad hit his second home run of the game, I was wishing the game would be longer so I could watch him bat a few more times.

I’ve always liked that baseball was a game without a clock, that a well pitched game could last for just 2 hours and an extra inning game could go well past midnite. One of my favorite baseball memories is going to an A’s game, many years ago, paying $1.40 for tickets (they had a special) in the outfield bleachers and the game went 14 innings. The game went well after midnight and the PA announced when the last BART train would be leaving. Many had to leave before the game was over.

I like that the leisurely pace lends itself to our GameThreads. I’ve gone into GameThreads for hockey games and it is impossible to carry on a conversation. I like that baseball’s pace allows you to talk to the people around you at a game. At one game I talked to an older fellow who saw Lou Gehrig play. One game I talked to someone who was at the All-Star game in Detroit where a young Reggie Jackson hit a home run that went over the roof of old Tiger Stadium and hit a transformer on the roof.

Games are slower than they were when I was young. Pitchers tended to complete games and even if they didn’t, you wouldn’t see the teams use a dozen relievers between them. But, as much as it is fun to romanticize the past, the game is better than it has ever been. Athletes are better than they have ever been.

We are at the one quarter mark of the season, so we have had a chance to get to know Charlie Montoyo and apparently we like him. He got 100% in this week’s approval poll. This is the 8th week of the polling and his lowest ‘mark’ was 82%, back in week 3.

I approve of him, but there are moments. Let’s say he sends the runner on a full count with Luke Maile at the plate. Or he bunts in the 3rd inning. Those moments I don’t approve. I would like him to let his relievers go a little longer in games at times.

But all managers are going to have moments that make me question their abilities.

If you want to compare Charlie’s numbers with those of the other managers in the AL East:

The fanbase who least approve of their manager? The Nationals 14%.

The rest of the AL East:

The MLB team whose fans have the least confidence in the direction of their team is the Pirates at 20%.