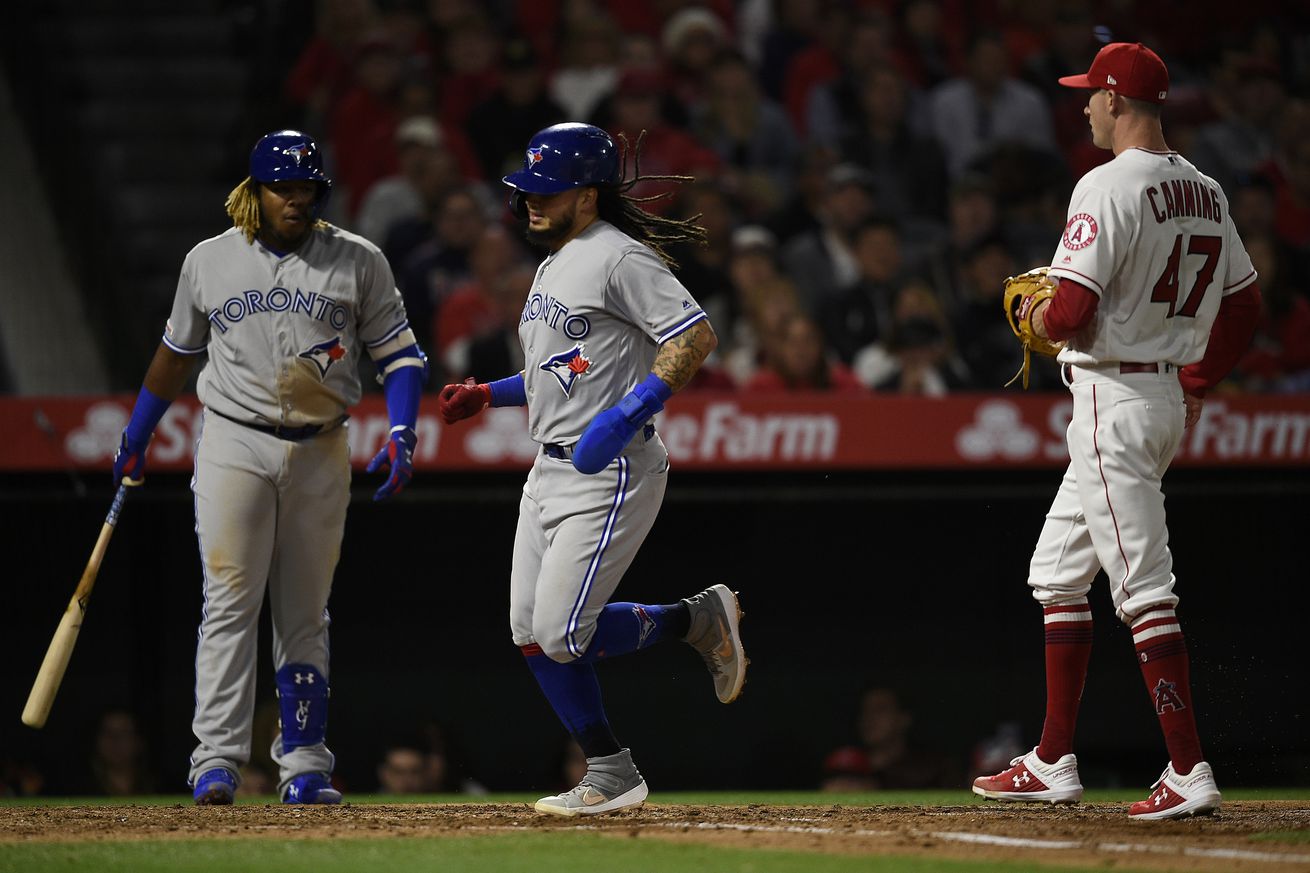 Good morning and happy May to one and all. After another tight loss yesterday, the Blue Jays will look to bounce back in game 2 of their 3 game set against the Angels tonight. The game gets underway 10:07 ET.

The Jays send their ace and Birthday Boy Marcus Stroman to the mound for the 7th time this season, looking to continue to add to his fantastic season. Jon Heyman tells us that Stroman’s 1.43 ERA is the second lowest by a Blue Jay ever through 6 starts, with just Dave Stiebs’ 1983 season getting off to a better start.

Overall Stroman is just 1-3 with that 1.43 ERA, as he hasn’t had much support from his teammates, both the offensive and bullpen side of things. In his last start, for example, he went 7 shutout innings, allowing just a single hit, and left with a 2-0 lead. But Joe Biagini blew the lead before Brandon Drury walked things off in the 9th.

The Angels will send 29 year old right hander Félix Peña to the mound in this one, making his 5th start and 6th appearance overall. Peña sports an 0-1 record with a 3.63 ERA over 22.2 innings, striking out 22 against 7 walks.

Peña’s best outing came in his last appearance when he came in after Opener Cam Bedrosian threw a quiet first inning against the Yankees. Peña proceeded to throw 5 innings, allowing 2 runs (1 earned), striking out 8 and walking none. It doesn’t seem like the Angels are going the Opener route for this one though, even though it worked well for them last time.

Brandon Drury got the start in RF last night, although with Eric Sogard leaving the game with illness, there’s a good chance they just give Sogard the night off to make sure he’s fully recovered, which means Drury would get 2B.

That probably means that Socrates Brito will get another shot in the outfield, although maybe we just see the Teoscar Hernandez, Randal Grichuk and Billy McKinney outfield that should be getting consistent playing time (against righties at least).

I think we need to talk about left fielder Brian Goodwin. After bouncing from the Nationals to the Royals and now the Angels since the start of last season, the 28 year old has been giving the opportunity for consistent playing time with Justin Upton down with his toe injury. All Goodwin did in his first month of the season was bat .338/.426/.575 (169 wRC+) over 27 games, and he now finds himself batting 3rd in the Angels’ lineup. With his game winning home run in the 8th inning last night, I think we can officially call him a threat.

Speaking of threats, the Jays kept Mike Trout hitless last night, although he did draw a walk. While he has been held hitless now 8 times in 27 games, he drew a walk keeps his on base streak alive. That streak has now been extended to 27 games, as he has reached base in every game this season (he finished the season last year with back to back games not getting on base, so the streak stops there).

Franmil Reyes went 3-4 with a pair of home runs yesterday, while also knocking a double and driving in 3 to earn the Monster Bat award. His bat was necessary, as Reyes’ Padres were able to hang on for the 4-3 win over the Braves.

The Cubs were in Seattle last night to take on the Mariners, and the win expectancy graph (which I regretfully still can’t figure out how to embed) was very turbulent. Kyle Schwarber hit an 8th inning 2 run home run that turned a 5-4 deficit into a 6-5 lead, a hit that was worth .517 WPA, and while the Mariners tried to mount the comeback, it didn’t take as that 6-5 score was the final one. Schwarber’s WPA King total on the day was .472.

Rick Porcello threw 8 shutout innings, allowing a pair of walks and hits, striking out 8 on his way to the Pitcher of the Day award. The Athletics managed a run in the 9th, but it wasn’t enough as Porcello’s Red Sox won 5-1.

Find the link between Pena and Fernando Tatis Jr.