Even with Giants left-hander Madison Bumgarner factored in, Blue Jays righty Marcus Stroman may end up as the most valuable starter on the move before the July 31 trade deadline. Like Bumgarner, Stroman has established himself as a legitimate major league starter. But while Bumgarner’s set to become a free agent after the season, the 28-year-old Stroman’s under wraps through 2020. Furthermore, on a $6.3MM salary this season and a to-be-determined arbitration salary next year, Stroman doesn’t come at a prohibitive price tag. 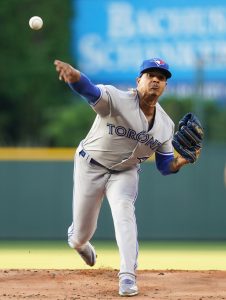 The fact that Stroman’s on pace for another 200-inning season is key considering he amassed a mere 102 1/3 during an injury-shortened 2018. Stroman’s also just a few years removed from missing nearly all of 2015 with a torn ACL in his left knee, but the good news is that he hasn’t battled any significant arm problems in his time in the bigs.

With Toronto near the bottom of the league right now and unlikely to contend in 2020, Stroman stands out as its most logical trade chip. Stroman’s time up north may conclude this summer as a result. With that being the case, we’ll take a look at a slew of potential suitors (listed alphabetically). Based on the latest farm system rankings from Kiley McDaniel and Eric Longenhagen of FanGraphs, some of these teams are in better position than others to win a possible Stroman sweepstakes…