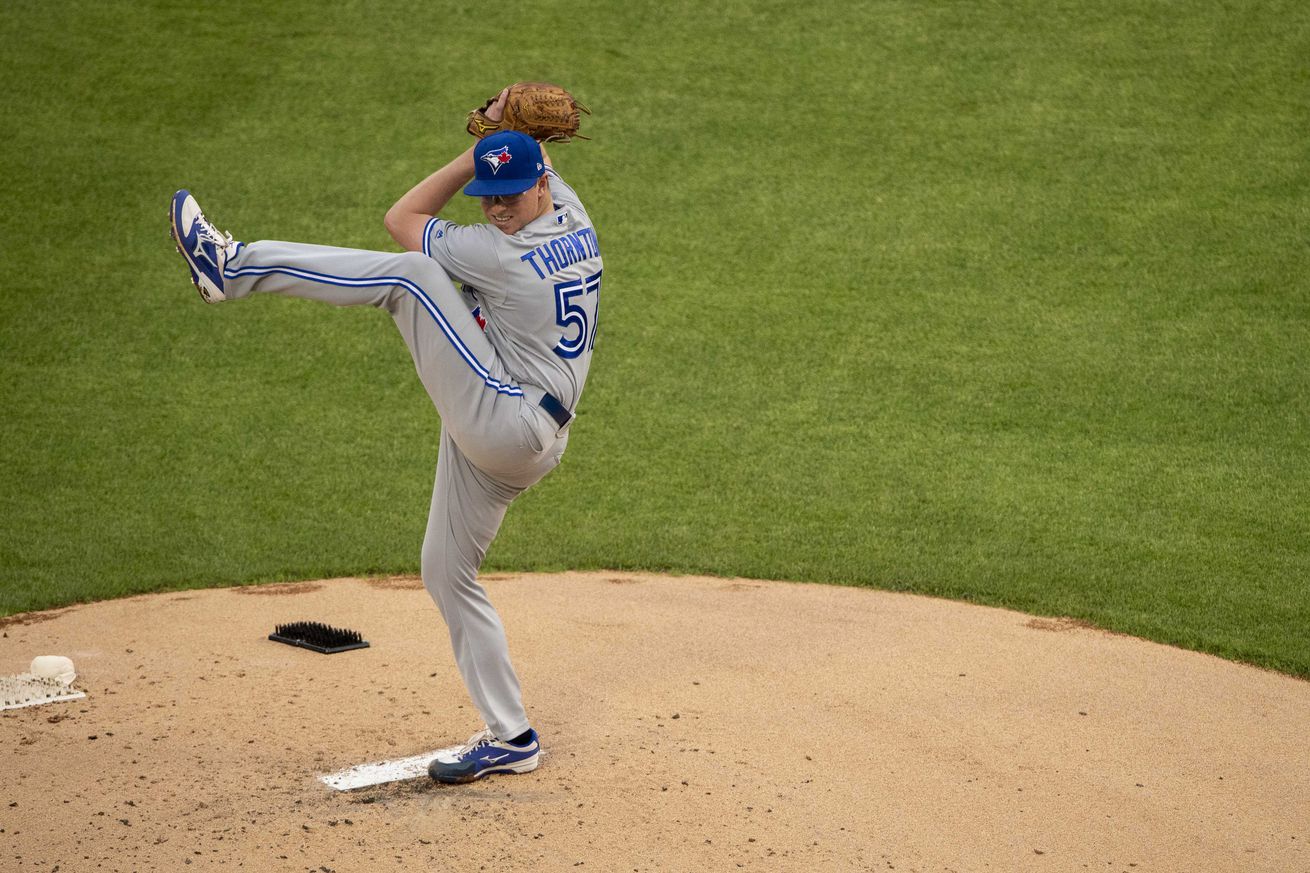 There were two MLB games that went into at least the 11th inning tonight. One was the high scoring Giants–Reds game that ended at 12-11, the other was this pitchers’ duel on a rainy night that ended 1-0.

Trent Thornton was outstanding. He ended up pitching 7 innings of shutout ball, giving up only one walk and two hits. No baserunner made it safely past 1st. Thornton actually took a no-hitter into the 5th that was broken up by a Nomar Mazara bloop into no man’s land in left field. Freddy Galvis tried for it but couldn’t get to it, and Teoscar Hernandez ended up throwing Mazara out at second. Teoscar likely should have called for it, but he got the out (and an outfield assist).

In the 6th, Thornton walked Delino DeShields with one out, and after a back and forth of pick off attempts, Choo hit a liner right to Vladdy and they doubled off DeShields.

Gettin’ by with a little help from our friends. #LetsGoBlueJays pic.twitter.com/eHSiNtpjck

The Rangers returned the favor and mirrored the play in the bottom of the 6th. Rowdy Tellez singled, then was doubled off after he tripped trying to get back to 1st when Tesocar Hernandez’s line drive that was caught by Asdrubal Cabrera.

Tim Mayza started the 8th. Gallo hit a lead off single (Montoyo deployed the 4 man outfield against him tonight), then he got the next two outs. Joe Biagini struck out Hunter Pence to keep the game scoreless.

Biagini pitched a clean ninth inning. Ryan Tepera was handed the ball for the 10th, and he gave up a lead off double to Elvis Andrus, who advanced to 3rd on a Mazara fly out. An intentional walk to Joey Gallo, then a strikeout, then another intentional walk and a ground out sent the game to the 11th. The Rangers had the winning run at 3rd again in the bottom of the 11th against Daniel Hudson, but couldn’t score. It was also raining heavily at this point:

Buck drops some dirt science on the broadcast pic.twitter.com/S3P2aa2Zgq

Montoyo saved Ken Giles for a save situation, and it fortunately worked.

Unfortunately, Mike Minor was just as effective as Thornton was. The Jays were seemingly off to a good start offensively, when Eric Sogard took a lead off walk and Freddy Galvis singled him to 3rd, then advanced to 2nd on a Joey Gallo throwing error to put runners on 2nd and 3rd with no outs. However, Minor struck out Randal Grichuk and Justin Smoak, then got Vladimir Guerrero Jr to fly out to end the threat.

In the 3rd, Sogard hit a one out single, then one batter later Grichuk singled, but Smoak grounded out to end the inning. Sogard singled again in the 5th with two outs.

Galvis hit a two out double in the 8th, and Randal Grichuk singled to left field, but Joey Gallo threw out Galvis at home by several feet. It was a risky send with two outs in a scoreless game, but it looked like it was pretty much an automatic send.

Chris Martin (not to be confused with the other Chris Martin) pitched the 9th. Vladdy Jr reached on a one out infield single when Odor threw the ball into the dirt at first, and was not replaced by a pinch runner since his designated pinch runner was designated for assignment earlier today.

He posts a 28.1 ft/sec sprint speed (above MLB average of 27) and gets down the line in 4.48 seconds to beat out an infield single as the potential go-ahead run in the 9th.

Vladdy advanced to 3rd on a single by Brandon Drury (let the man run for himself!), but Teoscar Hernandez struck out to end the threat.

Pinch hitter Billy McKinney led off the 10th with a walk from Shawn Kelley, and Sogard sac bunted him to 2nd, but the Jays couldn’t score him.

The Jays scored the only run of the game in the 12th:

The Jays had 11 hits and stranded 12 baserunners tonight. It’s hard to only score one run when you have 11 hits.

I realize it’s a results driven business, but Vlad Jr has the two hardest hit balls in the game tonight. 108.1 MPH on the 1st inning line out, and 106.6 MPH on the GIDP. It’s gonna come. #jays #bluejays

We had 923 comments in the GameThread. Belisarius, just like the Jays, edged out a win by one. Congrats!

Next up: Lance Lynn will take on TBD Starter (likely Thomas Pannone) at 8:05pm PT.