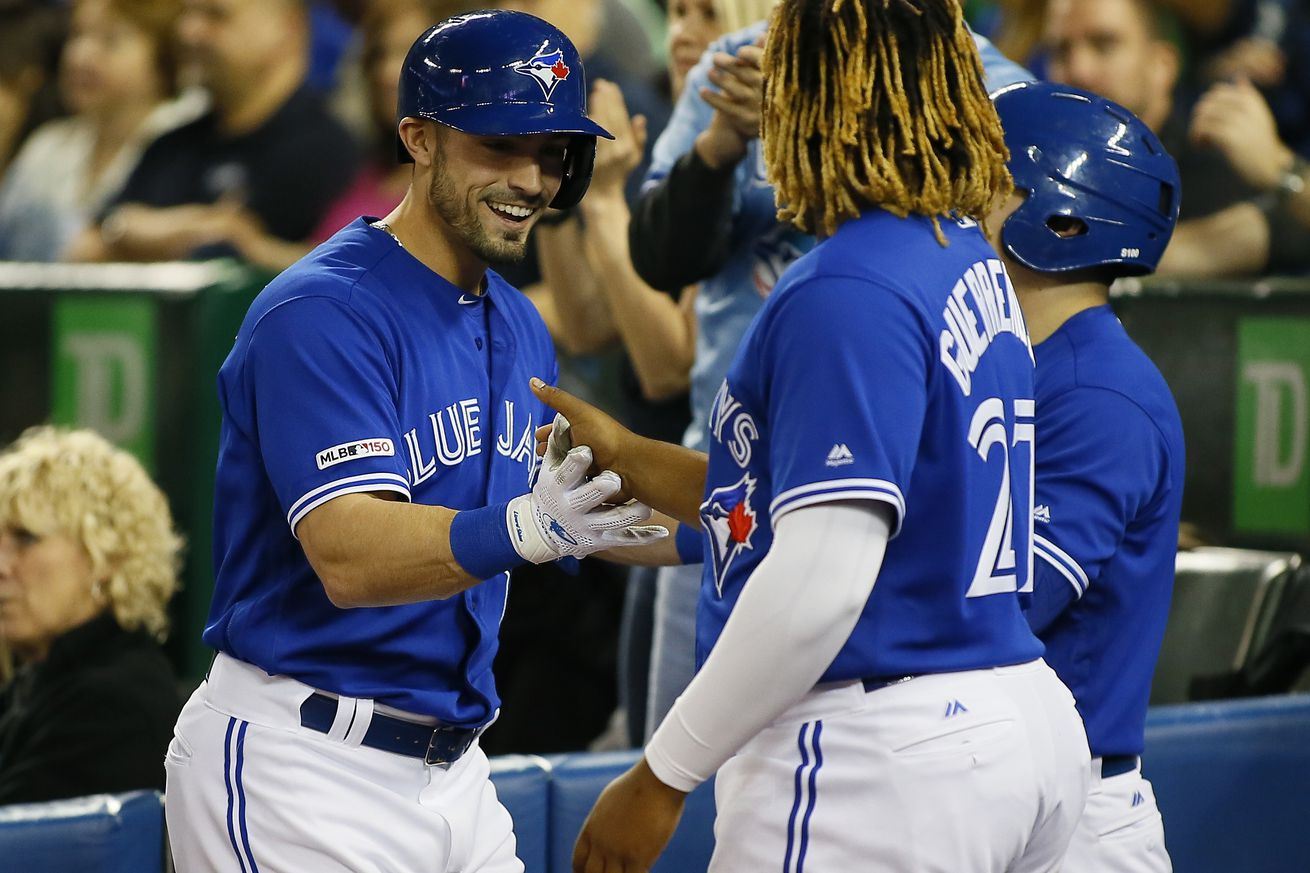 After erupting early yesterday, the Jays bats resumed the deep slumber into which they had been earlier in the week and had fallen back into for the rest of yesterday’s games. At least for the part, happily there were a few exceptions.

With the Jays being shutout two-thirds of the way home (plus ça change…), Randal Grichuk homered for the second straight day, leading off the 7th inning. Leading off off the 9th inning, he hammered a triple and scored on a subsequent groundout, marking the only tallies on the scoreboard. His seven total bases on those two swings almost matched the rest of the team (six singles, two doubles for eight total bases).

There was however another major positive, in that Vladimir Guerrero Jr. finally got rolling as he reached in all four of his plate appearances. In his middle two plate appearances he drew walked, but squared balls up very well for singles in the other two. Like, really well:

Only one ball has been hit harder in the majors this season (Stanton, 120.6 mph). #BlueJays

That was on his first inning single, an absolute bullet. If we want to nitpick, it was still hit at a pretty low/suboptimal launch angle. In his last at-bat, he went with a pitch low and away and dumped it the other way into right-centre for a solid base hit. It was much more reminiscent of what he was doing when dominating the minors, so that was good to see.

Freddy Galvis also had a good day at the plate, 2/3 with a double. Other than that, the less said the better. There was a BS interference call on Rowdy Tellez in the 8th. Vlad did make a miscue on the bases, and Grichuk was probably overly aggressive to the point of recklessness in stretching the double to a triple in the 9th. But it really didn’t matter.

On the mound, Marcus Stroman was really sharp early, working a quick and efficient two innings with two strikeouts and everything on the ground, including a single. It looked like the beginning of a vintage start, but alas was not to be. After a leadoff bounceout in the third, the 9-hole hitter Yolmer Sanchez squared a ball up the opposite way, a fliner that just snuck over the wall.

From that point on, the White Sox were much better at sqauring up Stroman, and he was consistently working out of jams and runners on. Two more singles in the third netted a second run for the White Sox, and then Stroman held the line until the 6th started with back-to-back singles. With one out, another single cashed a third run, and Charlie Montoyo had seen enough.

Stroman however was very much not on the same page, yelling at Montoyo wanting to stay in as he came to take the ball. Once in the dugout, he continued with Pete Walker when he came over to say something. At the end of the day, not something that’s really a big deal, basically frustration boiling over in the heat of the moment — but not the best look either.

From there, the bullpen continued the leakage. Derek Law allowed one of the inherited runners to score on a squeeze bunt, and then the next inning started with a walk and double. Javy Guerra came into allow those to score on a double. Elvis Luciano had a messy ninth with three free passes and a RBI double, though also two strikeouts.

The Jays will look to take the series in the 1:05 rubbermatch tomorrow with Lucas Giolito against Aaron Sanchez.