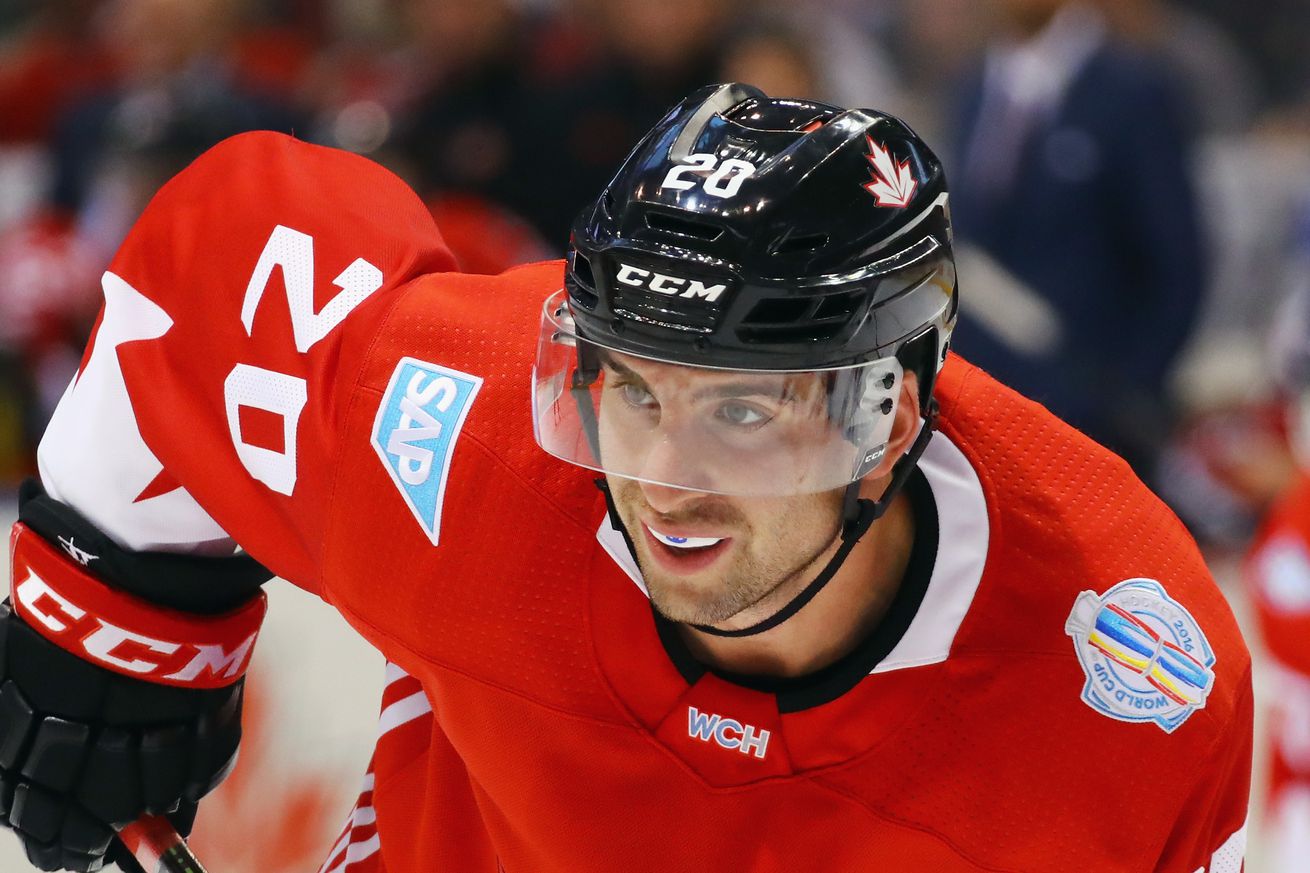 Four Leafs players are in this year’s Worlds. Might there be some future Leafs there too?

The 2019 IIHF World Champions begins on Friday, May 10 with four Leafs players on four different teams. While we all would really prefer to be ignoring this tournament this year, it was not to be, and John Tavares, William Nylander, Nikita Zaitsev and Martin Marincin are taking the opportunity to play some more hockey. One of them is a favourite to win the gold medal.

This year’s tournament is in Bratislava and Kosice Slovakia, which is one of the reasons the Leafs released Marincin, who was eligible to join the Marlies, but now gets to play for the home team. Play begins on Friday May 10, and the medals get decided on May 26. In between there is a lot of hockey with some prospects to watch out for as well as NHL veterans.

Preliminary Round, Relegation and Quarterfinals

Sixteen teams play in the tournament, split into two groups who play in separate cities for the entire preliminary round. There are not 16 teams in international hockey who can win a tournament even if the NHL isn’t still in the midst of playoffs. It used to be thought of as the big six and everyone else, but the reality now is that it’s more like a big four, two or three maybes and second tier of teams that is larger and has more parity than ever before.

There will be massive blowouts in preliminary games, and the handful of teams who might be facing relegation will only look plausible against each other.

The bottom two teams in the tournament, not necessarily the last place team in each group, are automatically relegated. Unlike in some other IIHF tournaments like the WJC, there are no relegation games. Next year’s World Championship will feature the winners of the Division IA event last week: Kazakhstan and Belarus.

The IIHF has a new overtime format, and is in a transition stage where all the tournaments do not use the same rules yet, so what you saw at the WJC is not what will happen here.

For the preliminary round, overtime is five minutes of three-on-three hockey with a three-minute intermission beforehand. Games will go to a shootout if the overtime does not decide the winner.

The shootout format is an initial five rounds, and then becomes sudden death until a winner is decided.

Many countries have had full rosters in training camps and pre-tournament friendlies for some time. The official team roster is submitted just before the tournament starts, and teams may choose to leave openings for additions later. Once they’ve named 22 skaters and three goalies, they can’t add anyone else.

Each game features 20 skaters and two goalies, so some scratches and roster rotation will occur in a tightly packed tournament. Final rosters will be available later today or tomorrow morning at the IIHF site.

John Tavares tops a strong, but not dominating roster for Canada. The goaltending is better on paper than last year, but the defence is lacking some of the top Canadian players. The mix of young and veteran, grinders and ultra-skill is very interesting.

Watch for Anthony Cirelli to score a lot and for Dylan Strome to surprise you. Some Leafs fans are in on Dante Fabbro in fantasy trades, so watch him and see what you think.

The USA has gone for youth, speed and some more youth. The Hughes brothers, new Ranger Adam Fox and Thatcher Demko are balanced by James van Riemsdyk and old man Jack Eichel. If they get a goalie to deliver, they’ll be a very fun team to watch.

Finland has few NHL players, on star, and is in danger of slipping in the final rankings. If ever there was a year an upset could happen in the top four, this might be it. Their defence boasts two teammates of new Leafs player Teemu Kivihalme, and he seems to have come extremely close to making the roster this year.

The reason to watch Finland begins and ends with Kaapo Kakko, a true star in the making.

Germany shocked everyone with their silver medal at the Olympics, and they were still punching above their weight at last year’s Worlds. They lack star power beyond Leon Draisaitl, however.

Without Frederik Andersen, it’s hard to imagine this perennial Cinderella team will make the quarterfinals, but they are insulated from relegation by worse teams. They’ll have a few NHLers, and a lot of KHL and SHL players.

On Tuesday night, the Marlies swept the Cleveland Monsters despite the best efforts of breakout rookie Alex Texier, one of the best players on the ice for Cleveland. If he joins his National Team, he will be that again. Without Pierre-Edouard Bellemare, who has been injured, they’re a team without any offensive punch.

The surprising win last year by Great Britain in Division I was an amazing feat, but they are going to struggle mightily, even against the bottom few teams. Liam Kirk, drafted last year by Arizona, is the star of the group.

Sweden is going to have to get its offence from Elias Lindholm and William Nylander, two players who have an early playoff exit to put behind them. Even without Victor Hedman, the team is good on the blueline, but they’ll need vintage Lundqvist to go deep beyond the quarterfinals.

You’d be forgiven for reading the Russian roster and just assuming they’ll win the gold. But Worlds is full of surprises, and that’s why you play the games. That said, they have a powerful goalie trio, stunning offensive skill, and very interesting grinder line out of the KHL.

As always, the defence is weaker than Sweden’s, and Nikita Zaitsev will again top the right side of the depth chart. Alexandre (Y)elesin, who is rumoured to be going to the Flames, was reported as a late cut, so Zaitsev is the only right-shooting defender again and should play a lot of power play minutes.

Leafs fans will want to watch that grinder line centred by Sergei Andronov, since this veteran centre is rumoured to be in the sights of the Leafs. He’s not going to wow you with offence, but the question is: Could he be the fourth-line centre?

Missing almost all of their NHL stars, the Czech team could suffer as much as Finland this year. They always play systems very well, and the whole will be greater than the sum of the parts, but they are in tough with this roster.

The Swiss, led by Nico Hischier, Roman Josi and Kevin Fiala have the potential to muscle the Czechs out of third place if they get good goaltending. They likely should have been more willing to add some of their very good juniors, but they have a couple who can score.

Norway was also surprisingly good at the Olympics, and they’ve earned their spot higher up in the top division. But even if Mats Zuccarello joins the team, they’ll need miracles from the goalie to make the quarterfinals.

Latvia has the goalies to provide the miracles that Norway might wish for. Martins Dzierkals is on the roster at this point, which is a bit of a surprise, as he struggled this season. Their offence is weak, their defence more so, but both Elvis Merzlikins and Kristers Gudlevskis can steal games.

Michael and Thomas Raffle lead this team, and they will be in the fight with Italy for last place.

After Great Britain, Italy is the most likely team to find themselves in Division I next year.

Canada opens with a decently tough opponent in Finland on May 10 and then doesn’t face a serious challenger until the last day of the preliminary round when they play the USA on May 21. The United States plays Finland themselves on May 13, so they also get to coast a little towards that final game which will likely determine quarterfinal matchups.

The Russians play the Czechs on May 13 after opening against Norway. Czechia-Russia is always a closely-fought grudge match. The marquee matchup in Group B, the Russia-Sweden game is also on May 21, at exactly the same time as the Canada-USA game, so the IIHF thinks there’s no overlap in television audience for those games.

Sweden opens against the Czechs on May 10, and then should have a fairly easy time leading up to the last day.

Something weird always happens at Worlds, but the setup leading up to the final day looks to be a lot of hockey before the two games that really matter for determining quarterfinal placement.

Aside from the Leafs players, there might be some free agents and draft prospects worth looking over. Sergei Andronov on team Russia is a niche interest for Leafs fans. Jack Hughes and Kaapo Kakko are worth paying attention to just because they are both exceptional players. Draft prospect Moritz Seider on team Germany is definitely worth a look if he makes the final cut.

One Russian who tried the NHL and returned to the KHL might get some buzz. Mikhail Grigorenko, 24, has had a fabulous season, and you have to ask where all that scoring was in Colorado and Buffalo, but maybe the question contains the answer. He’s under contract to CSKA for next year, but having just won the Gagarin Cup, he might think again about the NHL.

Play begins tomorrow at 10:15 a.m., and many games will be broadcast on TSN or available at TSN.ca for subscribers. Find the schedule on their website. All Team Canada games will be shown as well as many of the other interesting matchups and all of the quarterfinals and medal games.