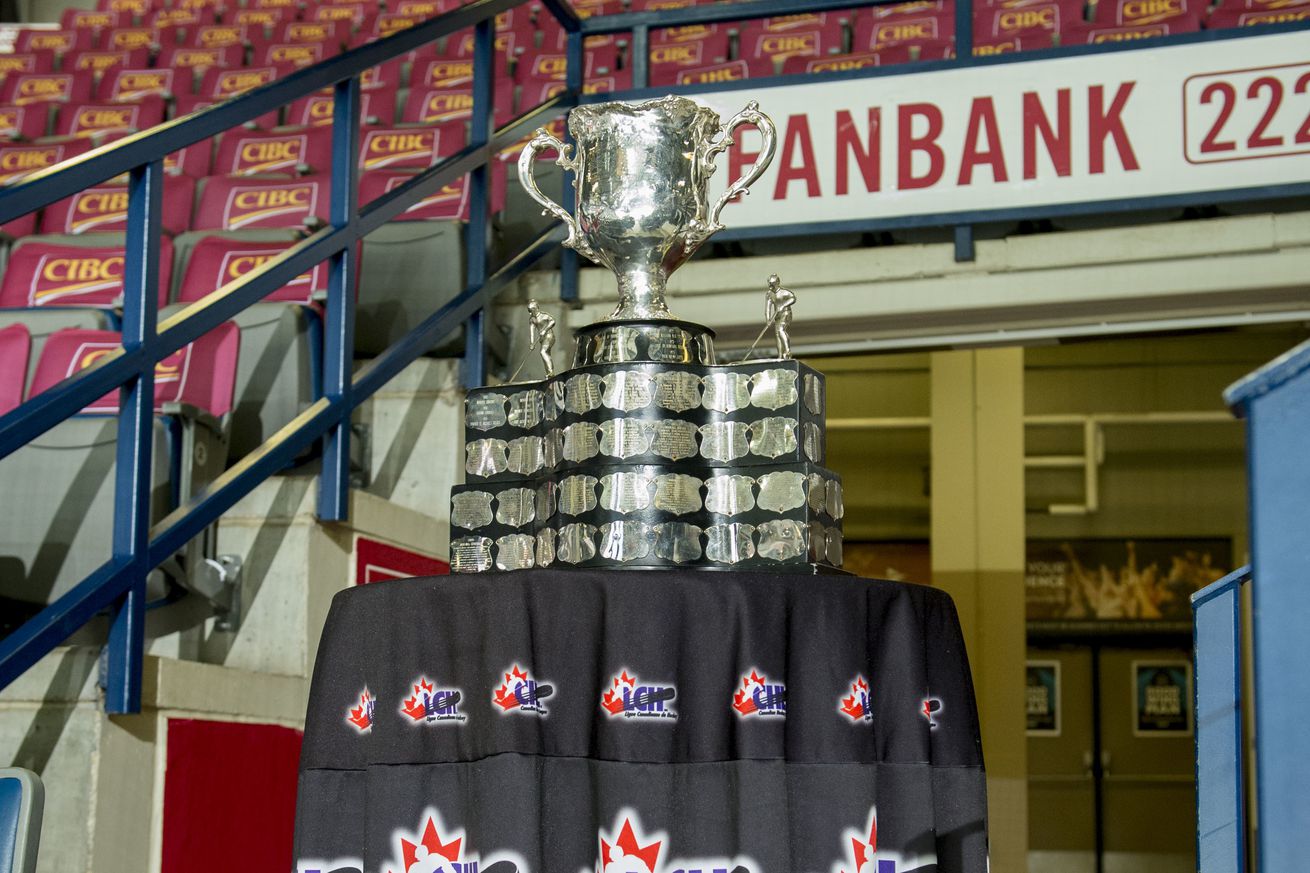 Where, when, how to watch

The tournament takes place at the Scotiabank Centre in Halifax, home of the QMJHL Halifax Mooseheads. Yes, it’s another arena named after Scotiabank, they’re a scourge on arena names, just like Rogers.

There are still tickets available if you’re out east or can make the trip. Tickets for round-robin games are $35-65 and for the championship weekend they’re $50-75.

The tournament begins tonight, May 17th, and runs until the final is played on Sunday, May 26th. We have one game per night for almost every night, and with the event taking place in the Atlantic time zone, us lucky folks in Eastern time won’t have to stay up too late.

Every game will air on Sportsnet and TVA Sports in Canada, and on the NHL Network in the US – some games are on tape delay. International fans can watch via CHL Live.

The tournament is simple. The four teams play each other once in a round-robin format, with a point system following the regular system – two for a win, one for an overtime loss, and nothing for a regulation loss. After the games have been played the team that is first in the standings gets an automatic bye to the championship game and three days off to rest and recuperate.

The second and third place teams play in a semi-final on the second Friday of the tournament. If third and fourth place are tied in points they’ll play a tie-breaker on the Thursday night.

I wrote up the history of the different formats, as well as record holders and tournament winners and controversies, way back in 2015.

Four teams from across the country are playing in this year’s tournament, representing small communities of under 40,000 people to big cities of almost half a million. Most importantly two Maple Leafs prospects are looking to win their first Memorial Cup.

The past few hosts of the Memorial Cup haven’t exactly been world beaters in league play. The 2018 Regina Pats lost in round one. the 2017 Windsor Spitfires lost in round one, and everyone was questioning the host selection process – especially after the Spitfires won the tournament.

The Halifax Mooseheads broke the mold this season by not only finishing third overall in the QMJHL, but becoming the first host since the 2015 Quebec Remparts to make it to their league final. The Mooseheads lost to the Rouyn-Noranda Huskies in the QMJHL final in six games, but made the case for them being a host worth of entry into the tournament.

The Mooseheads had the second best penalty kill and the best power play in the QMJHL this season and, on paper, are just as good as any other league champions. They have a tendency to take penalties though, finishing 4th overall in regular season PIMs and first in the payoffs, so that’s something to be careful about in such a short tournament.

Like a lot of top teams, they don’t have a lot of prospects for this year’s draft. A couple players to watch are Marcel Barinka (C) and Xavier Parent (LW).

If you like the team everyone’s cheering for, this is the one for you. the crowds will be very into the Mooseheads games, and hey, home ice advantage even when they’re the “visitors”.

Toronto Maple Leafs prospect Ian Scott led all CHL goaltenders in goal scoring this season, and that’s the only stat that matters.

Scott helped move the Raiders to the top of the WHL standings, and with some excellent defense in front of him, they became one of the stingiest teams in the entire CHL (the Everett Silvertips let in the fewest goals, with 130 – an average of 1.9 goals against per game). At the same time the Raiders scored the most goals in the WHL – 301 (4.4 per game). High goals for, low goals against. This team is a threat at both ends of the ice.

The Raiders doesn’t have a lot of future NHL talent on its roster, with only four players drafted: Cole Fonstad (MTL), Parker Kelly (OTT), Noah Gregor (SJ), and Ian Scott (TOR). This is a younger team though, so they could make a repeat of this season next year.

Brett Leason, a player who went undrafted last year, but made Canada’s WJC team this year, is the top draft prospect as an overager ranked 25th for North American skaters by Central Scouting. Only one other draft eligible player made it to any scouting rankings, and that’s centre Alexei Protas.

The Raiders are the team to cheer for if you love the “farm boy from Saskatchewan” hockey stereotype, or teams that can frustrate players by running up their own score while also shutting out the other team – so if you love it when Canada plays Italy, this is your team.

The comeback kids. We all know their story by now; overcoming series deficits and giant losses in games one or two to win playoff rounds they have no business winning. Longtime OHL coach/GM George Burnett took a team that was under-performing by New Years Day and did a complete 180 on the roster a week later at the trade deadline. He brought in big names like Nick Suzuki and Sean Durzi to top off earlier transactions to add Fedor Gordeev, MacKenzie Entwistle, Pavel Gogolev, and Markus Phillips.

The team has been a world beater since then – just doing it in an unconventional way. Burnett has been around the OHL long enough, and led the Storm to the 1998 OHL Championship. A life time OHL executive (with two seasons in Anaheim), I spoke with him earlier this season.

If you like those GOOD OL’ ONTARIAH BOYS, or teams that can be dramatic and make some epic comebacks, or are stocked with stars, this is your team. It’s a tough go for them, as they weren’t consistently good all year and dropping big games early in a series can be killer in a round robin tournament.

After going 20 years without a championship the Huskies now have two in four years. There are players on this team that were there for the stinging overtime loss in the 2016 Memorial Cup final, and that will be a huge motivating factor this time around. The Huskies were seen as potential giant killers against the London Knights then, but now they’re the giants themselves.

Coming from a small town up in northern Quebec – closer to the Sudbury Wolves than most QMJHL teams – the Huskies are the pride of the city, and a shining example for small, teeny-tiny market teams everywhere. For 22 straight weeks the Huskies were ranked as the top team in the CHL. They scored the most goals (320). Joël Teasdale led the league in playoff scoring with 34 points in 20 games. Peter Abbandonato led the Q in regular season scoring with 111 points in 68 games.

This is an old team for CHL standards, The vast majority of forwards were born in 1999 (yes, that’s old), their starting goalie is ancient at 21, and only four players on the team were born in 2001 or later.

Despite the ages of the players, they have only four drafted players on the roster; Joël Teasdale (MTL), Jakob Lauko (BOS), Noah Dobson (NYI), and Zachary Emond (SJ). This may just be a team built for junior hockey, or they’re just too far to drive to in the winter.

Only Alex Beaucage (RW), and Justin Bergeron (D) made NHL Central Scouting’s list of prospects for the draft, but with a team this old that isn’t a surprise.

If you like underdogs that become overdogs, giant killers who became the giant that is eating our goats, or plucky underrated league champions, this is the team you should cheer for

I know I should be cheering for the Leafs prospects to win it all, but I can’t go against the Huskies. They became my Q team after following them in 2016 (Martins Dzierkals will make it one day!), and I’m still mad at Mitch Marner for beating them in overtime that year.

The puck drops for game one just a few hours. So now that Sportsnet has remembered they have the CHL broadcast rights, turn on that TV, log into that app, and let’s all become junior hockey experts for the next ten days.