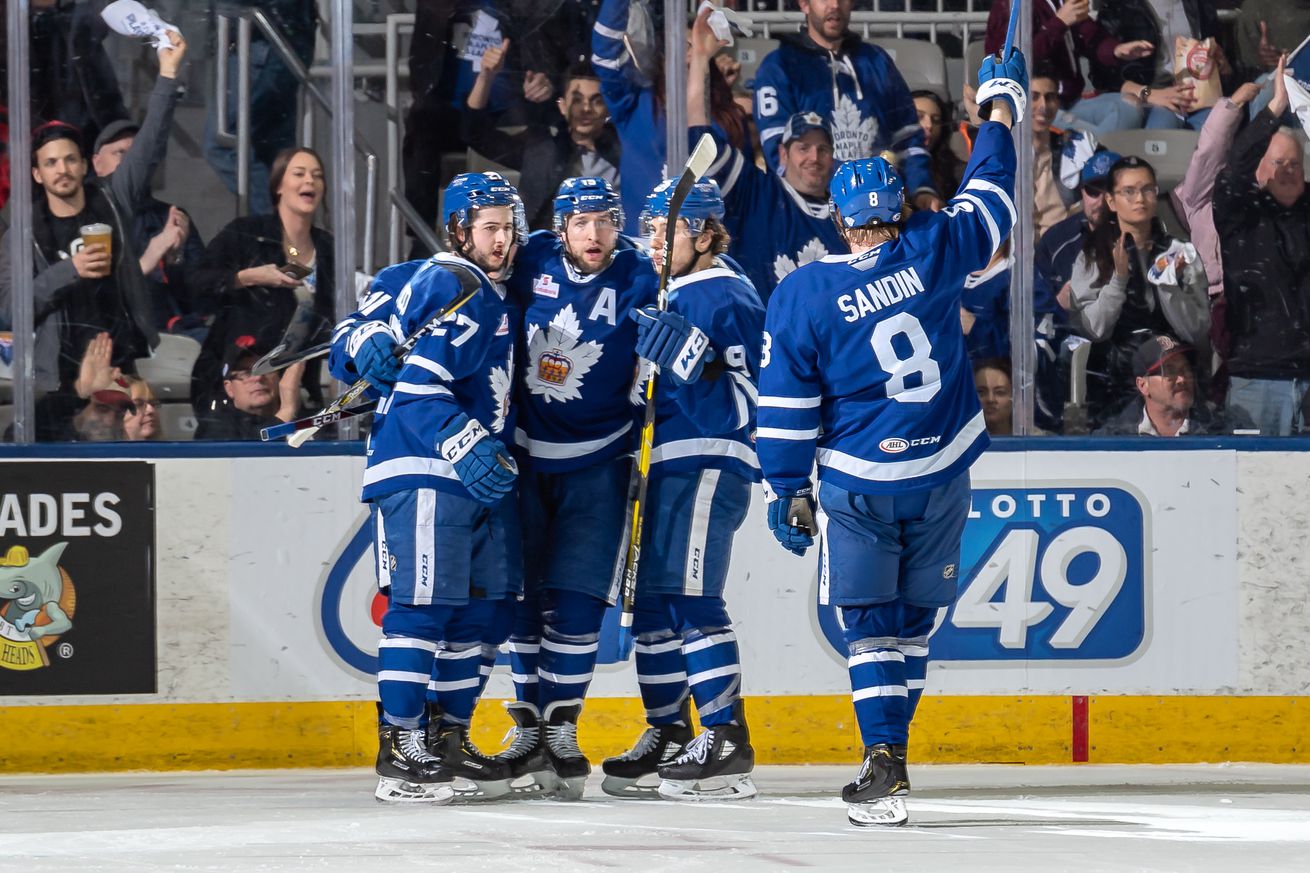 The Marlies have one healthy LHD left: Rasmus Sandin.

It wasn’t a perfect night, but the Toronto Marlies came out 5-2 winners on Wednesday night against the Cleveland Monsters in game one of their seven-game second-round series. The Marlies lost two key defensemen, Calle Rosen and Andreas Borgman in two separate incidents during the game.

Rosen fell hard into the end boards In the first period and was forced to leave the game with an upper-body injury. He had x-rays done on him at the CCC which came back negative. Hopefully he comes back sooner rather than later. Borgman, who was having a great night up until the second period when he was targeted with an elbow to the head from a Monster. He was slow to get up and also missed the end of the game.

Both Rosen and Borgman missed practice on Thursday and their presence in the lineup for game two is still up in the air. Expect veteran RHD Steve Oleksy and/or RHD Joseph Duszak to step into the lineup for game two on the third pair. In terms of left-handed options, there is no one on the current roster with that handedness, but Sam Jardine and Kristians Rubins are both in the ECHL and available.

D-men Calle Rosen, Andreas Borgman “day to day” after missing Marlie practice, Rosen appears to have dodged a bullet with a potential head injury. Either Steve Oleksy or AHL rookie Joe Duszak are first in line to go in if needed.

Kasimir Kaskisuo wasn’t asked to do much in the win, but he stopped 14 of 16 shots in the win. His postseason save percentage took a massive dip from .960 to .949, but that shouldn’t take away from the incredible job he did in front of a shorthanded defense.

The Marlies used a power play that went 4/7 on the night to carry them to the victory. Jeremy Bracco led the team in points with four assists. Before you get excited, all of them were on the power play and his lone primary assist came on the empty-net goal.

Michael Hutchinson is back from the NHL, but with Kasimir Kaskisuo playing so well (a .960 in the playoffs thus far and a .941 since Hutchinson was called up), it seems like the team is rolling with the hot hand.

At forward, Egor Korshkov is in the building for the Marlies, but sat for game one. He should be good enough to crack this roster, so it’ll only be a matter of time and a handful of practices before he steps in. Personally, I would love to see him with Engvall and Timashov.

The first 10 minutes was fairly even with both sides getting their chances. It wasn’t until a moment in the Marlies zone when things got serious, and not in the good way. Rosen and Sonny Milano were heading to the front of the Marlies net when Rosen got caught off balance and his 6’1” frame went falling almost head-first into the end boards. He was on the ice in a prone position for about a minute before the trainer was able to examine him on his back. Eventually, the Swedish defenseman was able to get to his feet under his own power and drift straight to the locker room.

From there, the majority of the period was spent on special teams. Eight minutes of the final 12:31 in the first contained a player in the box, two against each side. With five defensemen (arguably four with Hollowell needing to be so sheltered) available for the Marlies, it was a real juggling act for head coach Sheldon Keefe that he was able to make work. He played two pairings of Sandin-Liljegren and Borgman-LoVerde, with the four rotating penalty kill time. LoVerde took the brunt of the shorthanded time on ice, while Sandin and Liljegren split the power play time.

#Marlies penalty killers with Rosen out:

With Trevor Moore in the box for hooking, the Monsters were the first to get a bounce go their way when Tommy Cross took a rising shot from the point and was able to beat Kaskisuo. There was a player whose butt was directly in the face of Kaskisuo when the puck went by and I couldn’t help but notice that Sandin was standing four feet away doing nothing about it. Mental lapse or not, hopefully that’s something that gets brought up in the video sessions with Jack Han. Sandin hasn’t filled into his body, but he’s not small and has shown the ability to move bodies in front of the net.

Shots 11-6 for the Marlies, but they got most of their chances on the power play. In a word, the first period was chaos. Half the period was taken up with power plays, there were some pretty vicious hits being thrown by both sides (started by Toronto, I must say), Rosen was injured so the Marlies defense deployment was all out of whack, and all the while, Jeremy Bracco was acting visibly frustrated after hitting two posts on the power play.

For the second period, the Marlies basically shortened their bench to four defensemen (Sandin, Liljegren, Borgman, LoVerde) with Hollowell getting on-the-fly shifts whenever the puck started to move into the offensive zone.

It didn’t take long before the Marlies brought the game back to even. Engvall teamed up with Sandin for a great five-hole goal on Brad Thiessen two minutes into the period. Engvall was the team leader in 5v5 goals in the regular season, and he was there once again with the only 5v5 goal scored by the Marlies in this game.

Pierre Engvall is the most underrated prospect in the Leafs’ system, and this was before he tried out playing centre

The Monsters got that Engvall goal right back when Mark Letestu took advantage of a defensive breakdown by the Marlies fourth line and third pair. Hollowell was very tentative on this play and he kind of just settled in no-man’s land in front of the net, which opened up the shooting lane for Letestu.

Then things started to get away from the Monsters, and it all started with this hit on Borgman from Doyle Somerby. It was coming in at an incredible speed — he was feeling very confident in this game — and Somerby just laid an elbow right to his jaw. Borgman has an extensive history with concussions and has been one of the major stumbling blocks in his development this season. After the hit before last that took him out of the 2018 playoffs, I’ve worried that the next one will end his career. Here’s hoping and praying this one isn’t it.

So this hit on Borgman is pretty dirty and clearly a targeted elbow pic.twitter.com/Raiu9w5AVK

One thing that hit did was push the Monsters over the edge and they started to take penalty after penalty. From Somerby’s head check minor and onward, the Monsters took four penalties in the second period. The Marlies took full advantage and scored on three, giving themselves a 4-2 lead heading into the third period.

Here they are in succession.

On the tying goal, Moore and Mueller connected for a great backdoor play down low. Mueller has made a living this year sneaking into the back door and banging home pucks from all over the right side of the ice. The guy is a beast.

What have we been saying about Timashov since he arrived here three seasons ago? He doesn’t shoot. Well, he certainly did on this goal.

Finally, Moore gave us one moore when he shovelled in the trash from the side of the net from a Bracco shot from the point.

The Monsters knew Toronto’s power play was very good, but still decided to take four consecutive penalties in the second period, resulting in three straight power play goals; By the end of the period, the shots were 19-11 for the Marlies. The Monsters definitely need to run to the drawing board and figure out why they’re taking so many penalties ahead of game two.

The #Marlies are playing with essentially only four defensemen and the Monsters are just gifting them a way out of it. 6 times on the power play where they only have to ice one defenseman through 40 minutes.

Am I allowed to say that the third period was pretty boring? Apart from an Engvall breakaway at the beginning where he was stopped by the blocker, nothing much happened until the final three minutes of the game when Carcone took an unnecessary slashing penalty in the offensive zone.

The Marlies were able to kill off the two minutes with Greening, Jooris, Moore, and Brooks taking on the brunt of the minutes at forward and Vincent LoVerde basically not coming off the ice for the whole two minutes with Sandin and Liljegren rotating. Unlike the Colorado Avalanche from two nights ago, the Monsters pulled their goalie immediately so they could have a 6-on-4 for two minutes. The Marlies got three chances at the empty net from distance during the kill, but all of their shots were pulled wide right.

Eventually, Carcone came out of the net and made up for his penalty by drawing a fairly generous tripping penalty from Zac Dalpe.

The Monsters once again pulled their goalie, but with the play only at 5v5, Trev Moore was able to seal the deal with a shot from the offensive blueline.