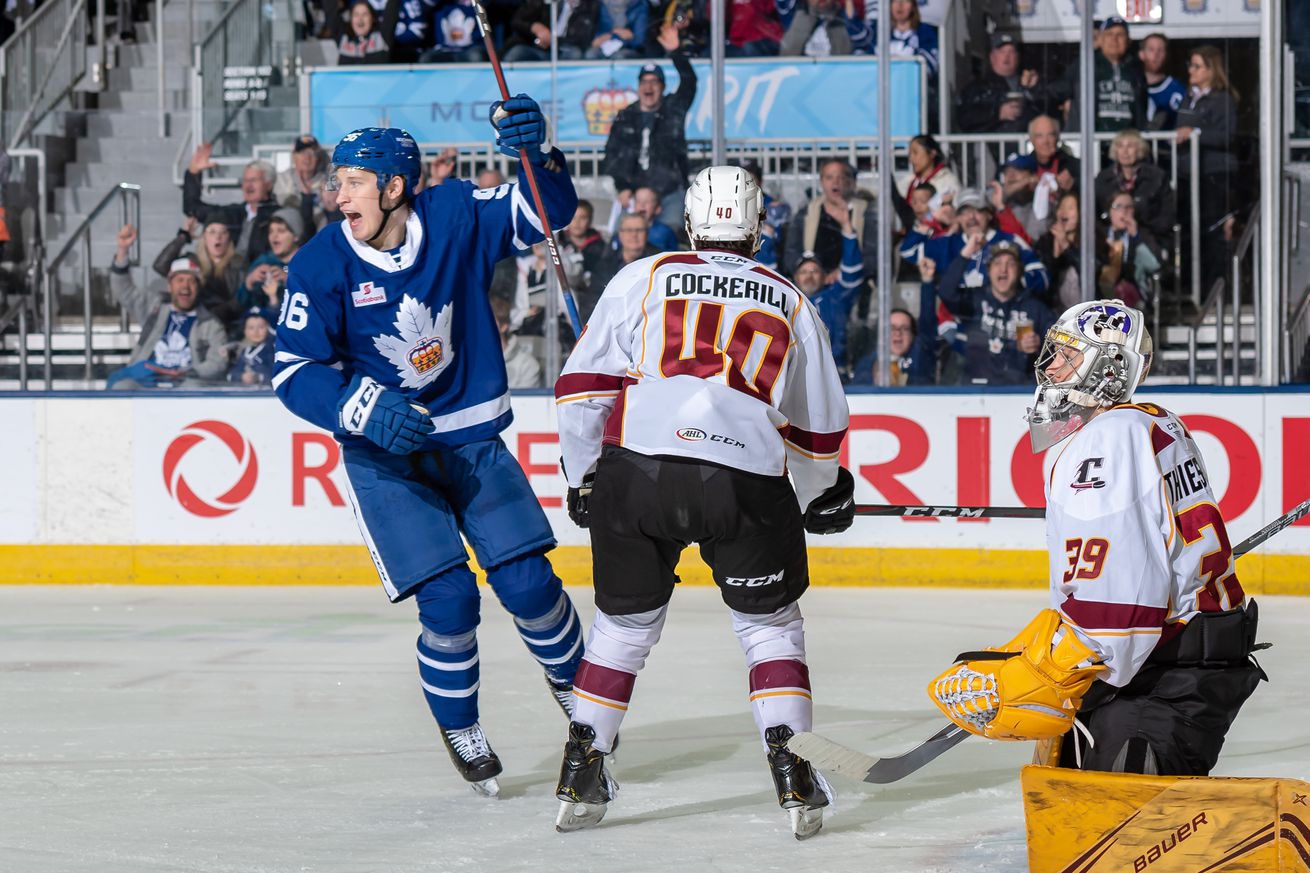 The Leafs’ 2016 second-round pick had a successful debut on the third line.

It was another imperfect night for the Toronto Marlies, but despite a poor performance at even-strength, they were able to come out 4-3 winners in overtime over the Cleveland Monsters in Game 2 of their second-round series. Newcomer Egor Korshkov scored his first career goal in North America in the third period, leading up to Michael Carcone scoring the overtime winner less than two minutes into extra time. Starting goalie Kasimir Kaskisuo didn’t have his best night, giving up two easy goals in the middle of the game, but on the whole stopped 35 of 38 for the win.

Despite the win two nights ago, the Marlies had to make some changes to their lineup ahead of game two. The first, a necessity due to injury. The second, because Egor Korshkov is probably really damn good. Joseph Duszak was in for Calle Rosen, and Korshkov was in for Tanner MacMaster.

The Marlies went with a young defense core with Mac Hollowell and Joseph Duszak alternating the responsibilities of playing their off (left) side. For two mobile defensemen playing under very sheltered usage, this was a very calculated risk.

The Marlies kicked off game two in the same fashion as they left game one: goals on the power play. This top Mueller unit has arguably been the best power play unit in the league and they showed off that they can do exactly what they want on the ice and score at will on this goal. After several shots and passes that just barely failed to connect, the top unit opened the scoring when Bracco fed Mueller from the top of the point to the back door of the net in a fraction of a second.

The Marlies had a frankly awful first period, but the one shot that they were able to get off in the first period was the one that resulted in a goal. Engvall started the play by bringing the puck into the offensive zone with numbers before doing a sharp button hook to open up Duszak for the shot. Duszak took the puck in stride and wired it past Brad Thiessen for his first career AHL playoff goal.

The Monsters would hound the Marlies in their own zone for the next 10 minutes of the period and eventually Dillon Simpson was able to take advantage of Mueller drifting too far out of position to take the puck to the net. There was a scramble in front as Simpson wasn’t able to get off a clean shot but Sonny Milano was able to tap home the rebound second goal of the playoffs.

Head coach Sheldon Keefe probably was very, very disappointed with Toronto’s performance in the first period. Goals aside, they were awful, taking only one shot on goal at even strength and giving up 13 the other way. The two power play shots (Moore from the slot and Mueller’s goal) lessened the embarrassment on the shot clock to only 3-13.

Kaskisuo had had a really strong playoffs up until this point. No mistakes. But this goal where Dan DeSalvo just walked across the blue line and threw a muffin past him is definitely one he would like back. It must also be said that Hollowell was very conservative in how he closed up on DeSalvo and didn’t cover the final gap until it was far too late. Plays like that are totally fine for rookie defensemen in the AHL, but it’ll be interesting to see whether Keefe is willing to accept that in his quest to balance development and winning.

Oh my god. Okay. So this goal got Coca-Cola Coliseum cheering like they just made it to the Calder Cup Finals. I should probably explain what happened. Well, Egor (Yegor?) Korshkov scored his first career goal in North America with a beautiful five-hole snipe from inside the inside hash marks. The play was started with Sandin finding a perfect gap through a maze of sticks in the neutral zone that opened Korshkov with the break.

On this goal, I think I fell in love with the Engvall-Korshkov pairing. They both skate really well, forecheck and hit, understand where they need to be on the ice, and they can both absolutely rip a puck into a net. If this is the Leafs Dubas envisioned, I really really like it.

The second period was much better than the first, relatively speaking. Both sides took a penalty and the shots ended up 11-10 in Toronto’s favour. They were able to keep up with Cleveland’s relentless play and stopped the odd zone entry, which was nice.

And again, right at the beginning of the period, Kaskisuo let in another weak goal to tie the game. This time, he failed to control his own rebound and let Ryan Collins just walk in and score. Kaskisuo wasn’t the only one at fault as Borgman basically got caught puck watching and didn’t skate to catch up to Collins in front of the net.

For the rest of the third, Kaskisuo did his best to make up for his two major gaffs, stopping some really big chances as the Monsters led the third period in shots 15-11. The Marlies nearly won the game at the end of regulation when they were gifted a power play with exactly two minutes left, but they couldn’t get set up for long, and the clock just ran out.

As we waited the allotted 128 minutes between periods, everyone was fearing a dauntingly long overtime. That wasn’t quite what happened.

On the first shot of the overtime barely a minute in, Bracco brought the puck into the offensive zone and dropped the puck off to Carcone at the wing. Carcone barely kept the puck on his stick as he whistled a shot past Thiessen, sealing the win.

As far as first impressions on complete unknowns go, Egor Korshkov’s debut was pretty good. Our first impression of him came in warm-ups when he showed that he could compete with Engvall and Martin Marincin for “guy with the lankiest frame.” That’s not to say he’s skinny. Far from it. In his first shift of the game Korshkov was laying hits and using his body to protect the puck along the boards as he searched for teammates in the middle of the ice. He spent a lot of the game hounding the blue lines as the “F1” while his teammates worked on retrieving the puck and moving it forward so that he could forecheck.

I don’t think this means Korshkov is a one-dimensional player, it’s more likely that they gave him a simple assignment as he gets acclimated to the system. There were moments early on of such acclimation needing to take place, but as the game went on, he got more comfortable in his role and started to expand his territory. He would sometimes skate deep into the offensive zone offside to lure defenders in before swooping back to tag up as his teammates with the puck came to join him. Same goes for his work below the hash marks. He didn’t spend much time standing still, instead worked on moving himself to different areas in front of the net to open up shooting opportunities or screens.

On the whole, his skating stride is a little inefficient, but that is an area of development the Maple Leafs know they can improve with Barb Underhill. Again, he’s a smart player who knows where he needs to be and can get creative in terms of how to get there. He is good on his edges and can protect the puck well, but the biggest thing Korshkov showed in his debut was his desire to shoot the puck. He was always moving around to make space for a shot, and always had his hands in a shooting position just in case.

Korshkov put a lot of those skills to use in one play late in the first period when he was able to take advantage of a Monsters giveaway before showcasing some skill and creativity to get himself to the net. Once there, he tried to muscle his puck back to his left for a potential shot, but was hauled down by the defenders hounding him. The play didn’t result in a goal, or even a shot, but it showed potential, which was enough to make the crowd at Coca-Cola Coliseum go nuts.

Through a translator, Korshkov was able to speak to the media following his debut and you couldn’t wipe the smile from his face. He was very very happy to be able to help his team win and score a goal, especially in front of his father, who made the trip to Canada with him.

The next game in the series is Sunday at 3 p.m. in Cleveland.