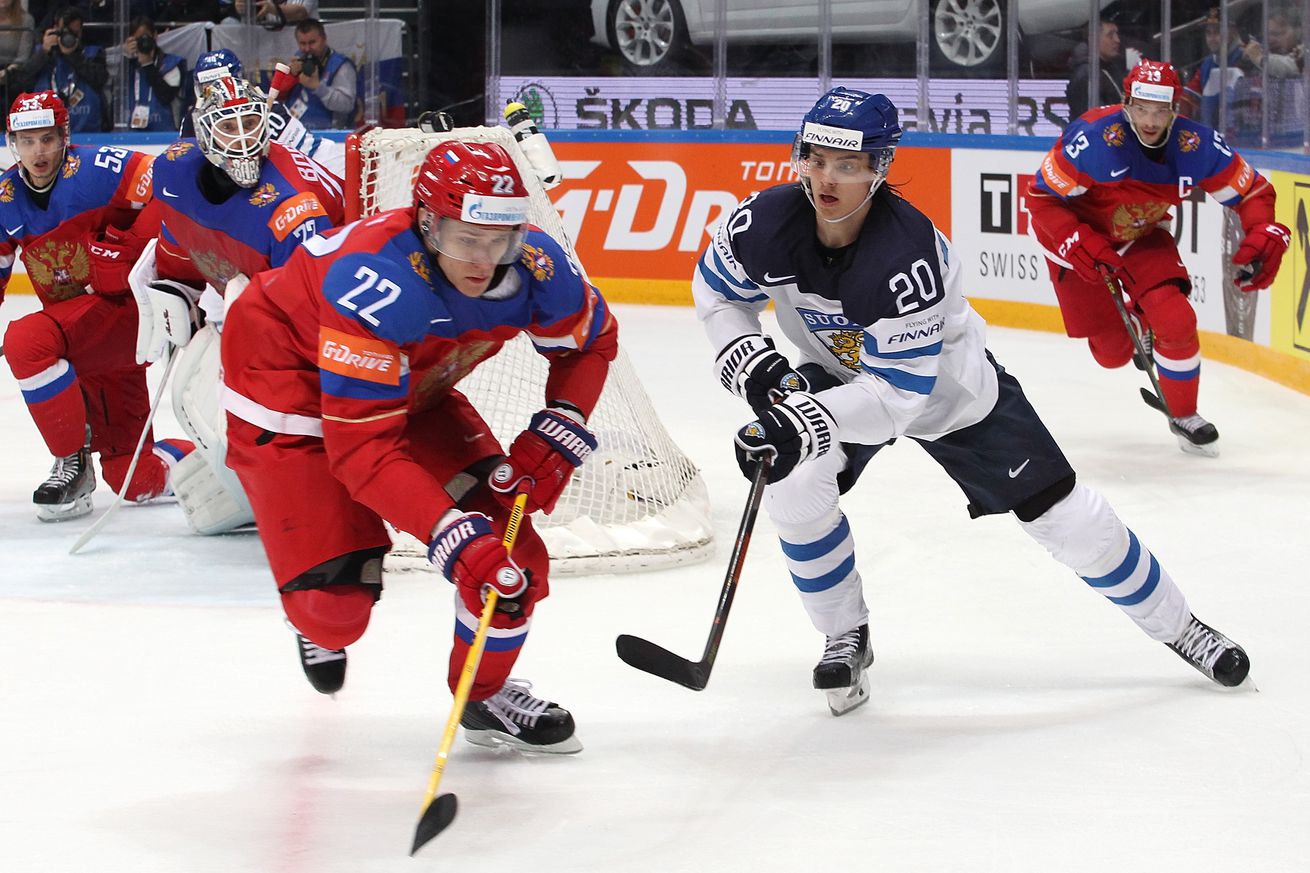 Martin Marincin and the Slovaks came close to making history.

Catching up on scouting the World Championships from the last few days brings goals, victory and crushing defeat.

On Sunday at the IIHF World Championships, Sweden played a game against the low-ranked Italians that was a chance for them to regroup and get organized after their opening-game loss to the Czechs. The result was never in doubt against Italy, but the original forward lineup didn’t survive the game.

In the early going, William Nylander was the dominant force on his line, and together with centre Elias Pettersson, they were creating a lot of chances.

It was Devils forward Jesper Bratt, Loui Eriksson and Anton Lander (now in the KHL) who also really shone, and they got the first goal. Lander went on to score a hat trick in the game.

Nylander settled down a great deal as the left wing as the game went on, and he made excellent centering passes off his backhand, but when it came time to shoot the puck himself, things were different. I saw him deke in on the left side twice, and then shoot off his backhand, and that’s just a low percentage shot for no good reason.

He was able to drive cross-crease and shoot from his strong side, however, and he was the most dangerous forward for much of the game.

In the third period, coach Rikard Grönborg decided to swap his top two centres, and he put Adrian Kempe (LA Kings) between Hörnqvist and Nylander. The line was suddenly a lot better. Pettersson is a fantastic young player, but he is young, and he has played wing a lot in his short career. He looks like a winger out there. Against the Italians, hardly tough competition, he simply could not hold the puck in the offensive zone as well as Kempe.

Watch this power play goal set up by Petterson #40 (if the commentary is confusing, there is a second Pettersson on the ice)

Just prior to this goal, they went through the identical passing play, except Pettersson hesitated with the puck, stick handling in indecision. Loui Eriksson, who is the player up in the right corner, had to point to Hörnqvist, and tell him to pass there. He did, and the Italian goalie stopped the puck, but the next time around, it worked. All of this is to say that Pettersson is a raw and is maybe not exactly a top line centre at this level right this minute. He’s close though.

Nylander finished the game with a goal and an assist, along with a string of failed shots (not wide, just easily saved). It’s really tempting to read way too much into that and to start seeing what you expect to see when he shoots, but that was a lot of bad choices including a miss on a play that looked like he was trying to go under the goalie’s glove when he had a lot of net above it to aim for. For all of the things Nylander is wrongly criticized for, his shot choice might be the valid one.

Should he be tried at left wing on the Leafs? Maybe. It depends on the roster going into camp, but it’s a nice option to have. However, if he loses effectiveness in his major areas of skill — carrying the puck, zone exits, and particularly zone entries — then it’s not worth it as anything other than an emergency usage.

For all the action:

In Monday’s action, Russia played the very tough and effective Czech team and won the game 3-0 in a dominating fashion. Sergei Andronov, the fourth-line centre I’m watching, since he’s rumoured to be on the Leafs radar, got the opening goal. It’s one of those “anyone could score this one” goals:

He played to his strengths the rest of the game, winning a massive percentage of faceoffs, and playing heavy shift rotation in the final minutes where the Czechs had the goalie pulled and there were numerous penalties. He was very effective in what was an extended PK role.

He didn’t grab the empty net goal, though:

In Monday’s game between Sweden and Norway, Grönborg moved Pettersson to wing on the second line and put new arrival, Alex Wenneberg, in as the top-line centre. If Nylander had a bad year, Wenneberg had a disaster. He scored only two goals as his already low shot rate dwindled to nothing. His team is really fed up with him after fairly heavily overpaying him.

Naturally, in the first shift, Nylander won the faceoff, dished the puck to Wenneberg, and he scored a few seconds into his first game.

Not very many minutes after that — enough time for Nylander to shoot it a couple of times himself — he brought it into the zone and executed a perfect left-side button hook and pass, which he’d done fairly clumsily the day before, and Oliver Ekman Larsson set up Hörnqvist for a tip goal.

I’m thinking of Nylander suddenly playing centre, and looking better, like he was more tuned in, and now he’s doing that while learning the left side. Clearly Babcock needs to make him a defenceman next season to keep him on the ball.

Norway is no more a challenge than Italy this year, they just hate the Swedes more, but you can’t fault the fabulous offence being put together by the Swede’s top unit. Defenders Ekman Larsson and Adam Larsson are also both excellent.

Nylander made it 3-0 with this classic left-winger goal:

And then later on he put on this display which was originally not called as a goal, but turned out to be over the line:

First of all – William Nylander.
2nd of all – What a save… but it’s not a save. Glove is was past the line to give Sweden another goal. pic.twitter.com/KArx82bJo1

The Swedes were stopped from scoring more by the final horn, so it never got past 9-1. Obviously all players in the NHL look good playing Italy or Norway, but some sure looked like they’d found their mojo again, and the top line of disappointments: Nylander, Wenneberg and Hörnqvist are putting together something to build on over the summer.

The whole goalfest is here:

In the case of grabbing defeat from the jaws of victory, Slovakia had Canada all tied up with seconds to go in the third period, but a penalty and Mark Stone prevented them from taking the tie to overtime. They nearly beat the Canadians, and they have nothing to show for it.

After four days of play at Worlds, William Nylander leads the points stats with two goals and six assists. Anthony Mantha is second and Anton Lander is third.

Russia is undefeated after three games. Germany and Switzerland have two wins in two games, and every other team has lost at least once. It’s too soon to tell if there are any upsets brewing, but Finland is doing very well without most of their stars and Canada isn’t. So far the Czechs are the not very surprising team playing way over their “on paper” strength. The USA, with only five points in three games are not living up to their hype yet.

Today is a set of games between second tier teams and bottom feeders. On Wednesday, the Russians get to beat up on Italy, Canada takes on France, and Sweden faces winless Austria while Finland gets Denmark, and the Czechs get Latvia, who are at least capable of winning. It’s going to be a pad your stats day.

The first real challenge for Sweden and Nylander is Saturday’s game against Switzerland. Rumour has it they’re getting Gabriel Landeskog by then, and if so, the left wing experiment may end.

You can find the schedule, standings and stats at the official website, and the games are on TSN.