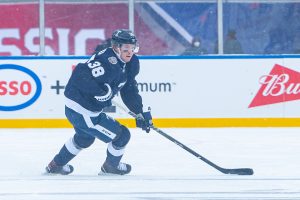 The Toronto Maple Leafs have announced that they have re-signed Rasmus Sandin. Sandin was a restricted free agent. Now, the Leafs and Sandin will look to finally break through the first round. The Rasmus Sandin contract carries a $1.4 million AAV and spans two seasons. He will be due for a new contract after the 2023-24 season.

Hearing Rasmus Sandin and TOR have ended their stalemate, at 2x$1.4M. That’s the number the Maple Leafs wanted. Thought Sandin might squeeze the Leafs after all the blueline injuries, but he does the smart thing and seizes the opportunity.

The Leafs made it a priority to get a Rasmus Sandin contract done this summer as he looks to be a key part of the blueline moving forward. The 29th overall pick in the 2018 NHL Entry Draft finally started to make a name for himself in the NHL last season. He played in 51 games and looked more comfortable as the season went along. Unfortunately, an injury late in the year kept him out of the lineup and put him on the outside looking in for playoffs.

Sandin had five goals and 11 assists in the 2021-22 season. He will no doubt look to expand on that this year. It will be interesting to see how Toronto’s blueline shakes out throughout the year. With Sandin, they now have Mark Giordano, Jake Muzzin, Morgan Rielly, Justin Holl, TJ Brodie, and Timothy Liljegren as possible players. Not to mention, they still may want to upgrade or add to it. It’s possible we see a body moved out, however, depth is never a bad thing either. Injuries happen, just like Sandin’s last year and you don’t want to be relying on AHLers.

This contract will allow both team and player to evaluate where they are at as the season goes on. It should be interesting to watch how Sandin’s development continues. Ideally, he can grow into a top-four role and help bump some players down. However, the Leafs have taken their time developing him and won’t want to force him into a spot he isn’t ready for.

The Leafs could have tried to call him up a year or two after his draft season full-time. Instead, they continued to move him between the NHL and AHL to see if he was ready. That patience has looked to have paid off. Look for Sandin to be poised and ready to have a breakout season.