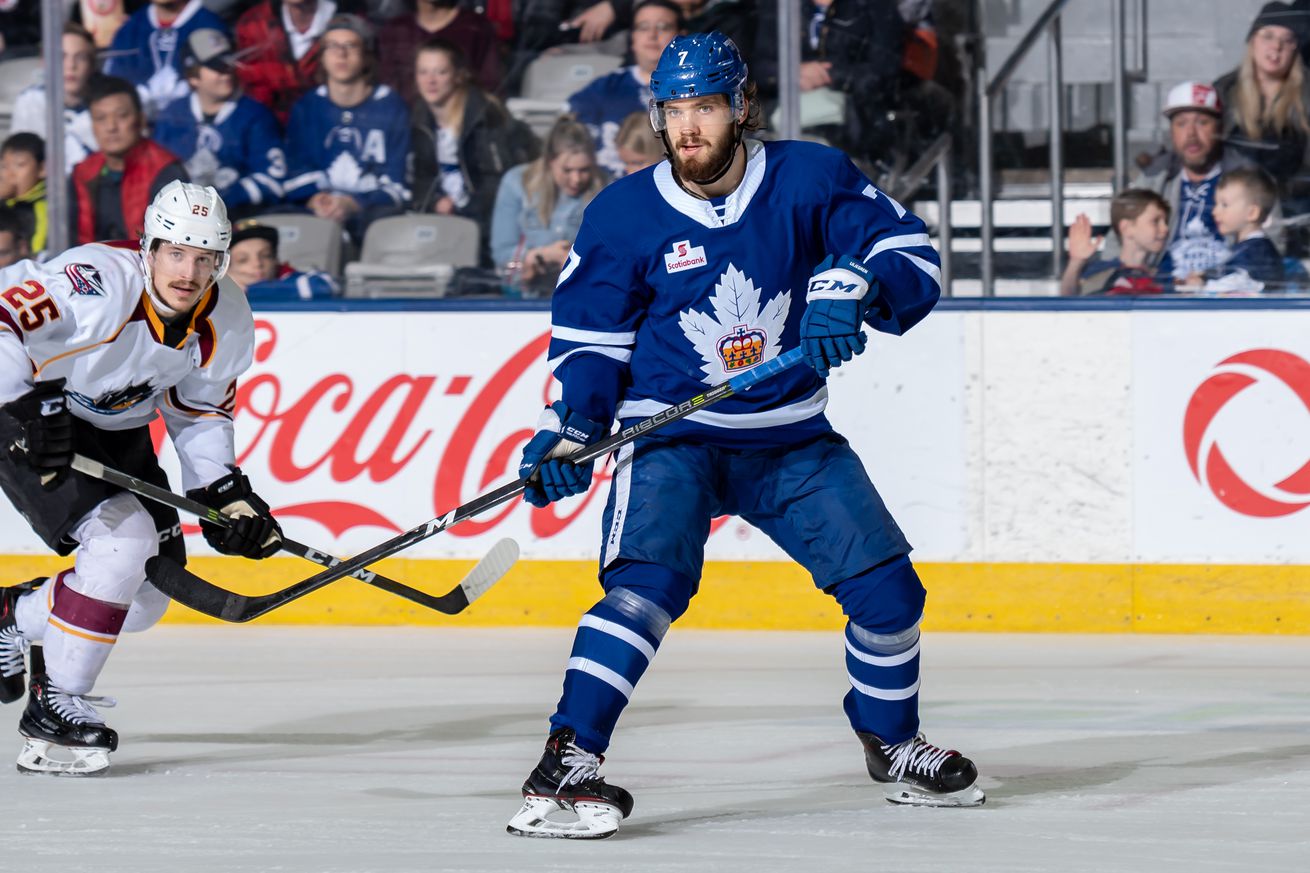 Kasimir Kaskisuo shut the door for his first playoff shutout.

The Toronto Marlies and the Cleveland Monsters took part in a war of attrition that culminated in one shot being the difference in a 2-0 win. With that win, the Marlies now hold a 3-0 series lead over the Monsters in the second round of the 2019 Calder Cup Playoffs. Adam Brooks and Dmytro Timashov scored the only two goals the Marlies needed in this game while goaltender Kasimir Kaskisuo picked up a 35-save shutout, his fifth shutout of the season and first in the playoffs, in the win.

After giving up the first goal in Game 2 at home to the Monsters, Sheldon Keefe reunited a line from last year’s postseason: the kid line! As a result, Carcone was promoted to the top line with the bottom six remaining intact. He and the coaching staff kept with the same recipe for Game 3 on the road, and it turned out to really help balance all the lines.

Moore and Carcone are not the same players, so when Moore had to play a narrowed role with Mueller and Bracco being the primary puck movers on the top line, it didn’t quite work. Same with the second line. Both Marchment and Brooks are complimentary players who can carry the puck and drive play, but could really use an elite player at that skill (Moore) to ease off that burden.

That’s why I think the third line is so good. Engvall has been a really strong facilitator up the middle with Timashov on one side providing an outlet and support in transition. With those two guys dictating the pace of the line, it has allowed Korshkov to slide into the system and just do the simple jobs as he gets more comfortable.

Apart from a few giveaways in transition at the beginning of the game while the team was getting their legs together, Kaskisuo wasn’t challenged much by the Monsters. They were getting shots (8-14), but not many scoring chances. Late in the period, he was forced to work a little harder, but for the most part, it was a very solid period for him and the Marlies.

The Marlies got on the board at the tail end of a very promising first period. They started out slow, but gradually ramped up their pace. Similar to a frog that doesn’t know it’s in boiling water because the temperature was increased really slowly, the Marlies were able to burn the Monsters on a nifty rush right at the end of a strong six minutes of play. The goal was started by Marchment in the middle of the neutral zone when he released Moore up the right wing. While at full speed, Moore pushed himself towards the faceoff dot and flung a pass right down the slot. Brooks was coming in from the opposite wing and was able to out-skate his defender in order to get to the back door first and bury home the puck.

Unfortunately for Brooks, seconds after scoring the goal, he got turnstiled into the ice at his own blueline as Trey Fix-Wolansky came in off the wing and got a good chance on Kaskisuo. But I guess we can ignore that since he didn’t score and Brooks did.

The second period was really smothering for both sides, which is a style the Marlies like since they’ve been the less skilled team on forward (excluding the power play). Both sides got a few chances, but majority of the period was played in the neutral zone and above the offensive faceoff dots.

There weren’t many whistles so we really got a chance to see how Keefe rolls his lines. He mostly went with his top-nine, with the Greening line getting defensive zone starts whenever he had the chance. This is not dissimilar to how Mike Babcock runs his bench. The only difference was that last year, Babcock had to give Gauthier a lighter load because he’s not as good in the NHL as Greening is in the AHL. Not a fair comparison, but a true reality for analyzing deployment.

For the first half of the period, the Marlies made an attempt to get another goal. They had a few chances, including one for Mueller right at the beginning of the period that was stopped with amazing reflexes from Thiessen. As the period went on, the Monsters started to pile on the pressure and the Marlies got caught out on really long shifts a lot. One of the longest came when Borgman and LoVerde came on the ice with over four minutes left and had to defend hard in their own zone for two plus minutes. Sandin and Liljegren came out with 2:01 left in regulation to kill more time, but then within 60 seconds, Borgman and LoVerde were out there again to finish the game. They fully deserved the plus they got on the Timashov empty-net goal.

The nail in the coffin goal was a pretty straightforward execution of the Marlies’ empty-net goal play. LoVerde worked hard to push the puck up the boards high enough for Engvall to get involved. With too many Monsters forwards deep, Engvall only needed to beat one guy, which he did with a slick move. All the while, Timashov jumped through the back door, forcing the defenseman back to either cover him (allowing Engvall to skate the puck out) or leave him open (where he’d invariably be able to score). Mark Letestu chose to try and beat Engvall, lost, and Timashov closed out the game.

Keefe loves his boring hockey, and that’s exactly what the Marlies did in the second and third periods. He was really happy with that performance and hopes this style of play is something they can do a lot more often because they’ve kinda gotten really lucky defensively up until this point. He also commended Borgman and LoVerde for their tireless work taking on the hardest minutes in the game. The Marlies wouldn’t be able to run the third pair that they do and Sandin and Liljegren as the top unit without them being at their best. Offensively, Borgman hasn’t put his best foot forward, but I think his work as a shutdown defenseman should really be commended.

“Kas” was very happy with his team’s work in front of him, noting that they gave up volume but not quality, which is all he needed to shut the door and get his first career playoff shutout in the AHL.

Adam Brooks is always very insightful in how he sees the game as a whole. His interview was very honest and gave a really good summary of the game.

And here’s the Game in Six.