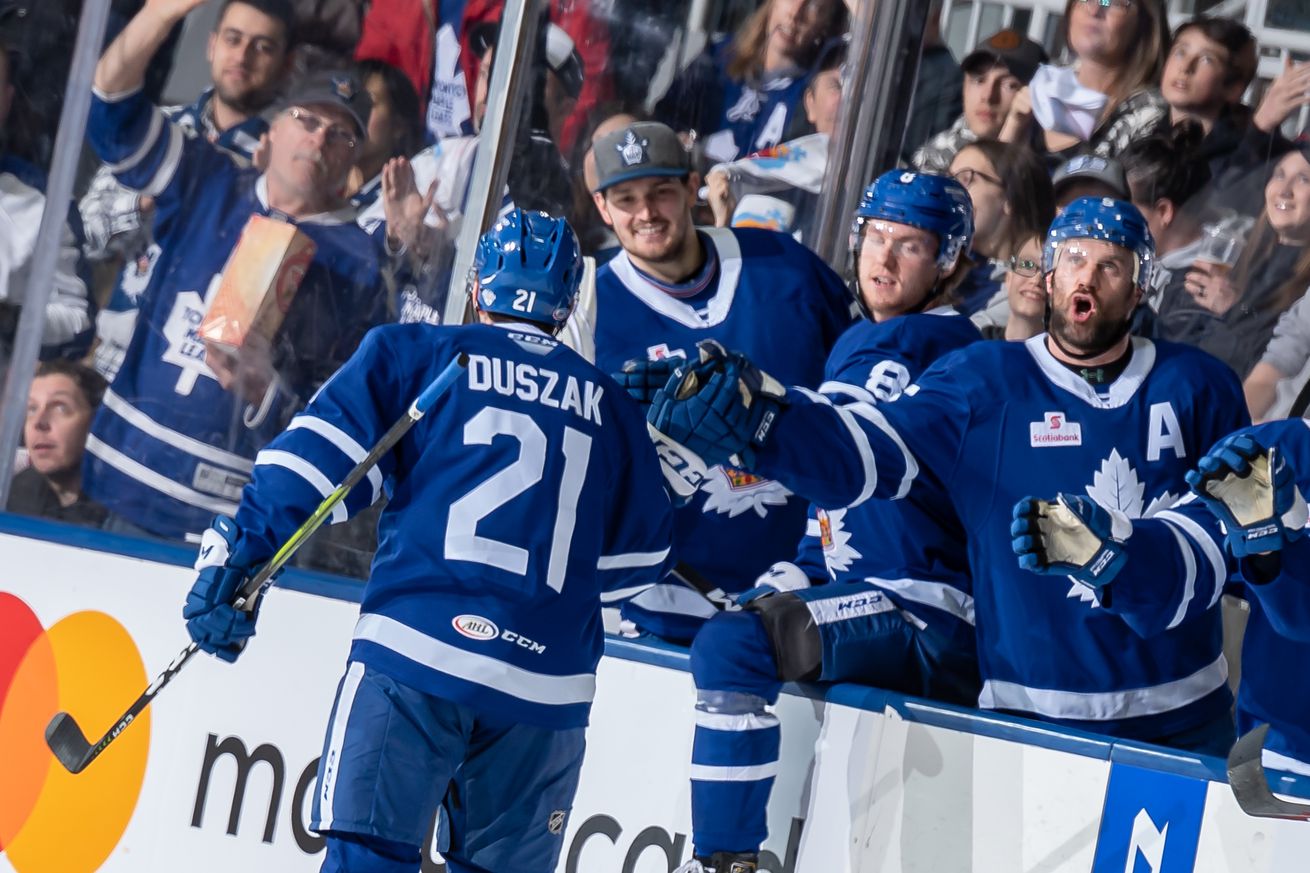 Keefe’s Marlies focus on process and get rewarded yet again.

The Toronto Marlies are heading to the Eastern Conference Finals following a 6-2 Game Four victory over the Cleveland Monsters on the road. Mason Marchment and Trevor Moore each scored two goals in the second period to put the Marlies ahead after falling down early in the game. As a group, the Marlies then ground down their opponents, refusing to give them space until the final buzzer blew on their season. Kasimir Kaskisuo gave up two soft goals at the beginning of the game, but held the fort after that for the win.

And with that, the Marlies are heading to the third round while playing the minimum number — seven games. At the beginning of the playoff run, the Marlies were not putting out good performances at 5v5, but rode a goaltender with a high save percentage and a power play seemingly sporting a silver bullet. But ever since Game One against Cleveland, the Marlies have done a better job committing to the system and making sure the defensive zone is safe before going ahead on offense. They’ve scored better at even strength, and have called upon their goalie less often, which has stemmed the effects of his hot streak eroding.

As Adam Brooks said after Game Three, they had to buckle down because the other team was going to make good on their chances eventually. This game was a prime example of that kind of mentality. They got down two goals early in the game, but didn’t try to force the issue at any point. They were fortunate to get a favourable bounce that opened the floodgates offensively when the Monsters started to falter, and then they closed the game out with a really stingy third period. Textbook.

Looking ahead to the next round, the Marlies night not have to wait long before they figure out who their opponent is. The Charlotte Checkers are currently up 3-0 on the Hershey Bears with the series in Hershey for another game. Charlotte was the best team in the league by far this season and have matched the quality put together by their NHL affiliate, the Carolina Hurricanes, in the playoffs. Charlotte is a nigh-unbeatable team with strong numbers at 5v5 and the league’s best penalty kill. We’ll have a full preview of the series if/when it becomes official.

Sheldon Keefe was so happy with how his team played in Game Three that he decided against making any changes for Game Four. Calle Rosen is still out, so hopefully Hershey can keep the series alive long enough for the Marlies top defenseman to heal up and be ready for the second round. There is still no official word on what the injury is or its severity.

The Marlies third pair of Duszak and Hollowell is not the absolute best pairing the Marlies could come up with, but it’s there to help the two young defensemen learn and grow. They certainly learned on this goal as Duszak got caught holding too high a line and allowed Trey Fix-Wolansky behind him. With the junior graduate’s immense speed, he was unable to be caught by either Hollowell or Engvall before he ripped the puck past Kaskisuo to open the scoring less than three minutes into the game.

What a time for your first pro goal there, @Wally9191! pic.twitter.com/jez5itoRNM

The Monsters got another goal not long after with Mueller in the box for holding. Zac Dalpe tipped a Fix-Wolansky shot from right in front of the net past Kaskisuo for a second goal within six minutes of the game beginning. There’s not much you can say about a power play, as the Monsters were able to create a 2-on-1 down low forcing LoVerde to have to pick who to cover. Maybe I’m missing something with this coverage. Feel free to let me know what you think about this play in the comments. Who should’ve had whom?

It was honestly looking like the Marlies were going to have to come home and finish off the series in Toronto after the first period. The Kaskisuo save percentage regression was underway and the forwards weren’t getting anything real. The volume definitely wasn’t there. So after one period, the shots were 9-6 for the Marlies. I would like to know the scoring chance numbers because I think that would’ve swung in Cleveland’s favour.

But then the second period came, and with it showed up Beast Mode Mason Marchment. I’m not sure if he chugged Mountain Dew or something like that between periods, but Marchment gave us his best work in the second period, scoring two goals and being a part of a third to swing the score all the way in the Marlies’ favour.

Marchment is the kind of player that can go into a different stratosphere of ability for a game, or a week or two, where he’s head and shoulder bigger, stronger, faster, and smarter than everyone else on the ice. Unfortunately for him, that quality of play has still been very inconsistent and unpredictable, especially when it ends.

There have been times when Marchment looks like he can push through and try and keep a hot streak alive, but just ends up overdoing it as he becomes undisciplined all over again. It would do him a lot of good, especially in his quest to make the NHL, to find a way to be more consistent and more responsible when the consistency isn’t there.

At the start of this shift, the Marlies were trying to break out a few times. Twice, Borgman and LoVerde got the puck up to Marchment at the bottom of the neutral zone, and twice Marchment assessed the situation, didn’t like what he saw, and passed it back for a re-group. It was a very mature thing to do and he was rewarded for it immediately when on the third attempt, he was able to follow Brooks on a breakaway and bang home the rebound for his first of the playoffs.

Then Marchment did it again. This time, he lined up a Liljegren point shot from in front of the net and was able to get his stick free enough to tip the puck down and around goaltender Brad Thiessen to tie the game. After the first period, it looked like the Monsters were going to walk away with the win in Game Four, but it was Marchment (pretty much) who single-handedly brought the Marlies all the way back to a tie game barely four minutes into the second period.

The scoring didn’t stop there as Moore got a goal of his own a mere three minutes later. Liljegren and LoVerde were on the ice together on this shift, with the right-handed LoVerde playing his weak side. It was to his advantage on this play as he was able to circle down from the point and spot Moore down low with a strong pass that gave the left-winger both time and space. Moore used both as he settled the puck, saw his opening, and sniped short-side shelf on Thiessen.

About three minutes after Moore’s go-ahead goal, Sonny Milano got himself in the box for cross-checking. On the power play, Timashov and Mueller combined for a jam play in front of the net. Mueller couldn’t quite reach all the way around Thiessen, so his attempt was blocked, but Moore came jumping in from the opposite side and pounced on the rebound for his second goal of the game and fourth in four AHL playoff games this spring.

It was a great first half of the period for Toronto, who used two power plays and three goals from the Kid Line to jump out to a two-goal lead of their own with only 20 minutes left. The Monsters started to come alive in the second half of the period, they got two power plays and really carried the pace of the play. Nevertheless, the Marlies ended the period with a 15-9 shot advantage and a four-goal scoring swing to their name.

Sheldon Keefe and his boys are AHL famous for playing the first half of the third period even, hoping to either eat the clock or jump on a mistake from the opposition as they get impatient while down a goal.

The latter is exactly what happened five minutes into the third period with the two sides playing some 4-on-4 hockey with Brooks and Alexandre Texier in the box for not liking each other. The Monsters got caught out long on a shift and had a tired group of four playing against a fresh Bracco and Carcone.

With the extra space to work with, the otherwise invisible Bracco circled the offensive zone perimeter twice before whipping a centering pass for Carcone to tip in at the back door. Once again, Bracco setting up a backdoor play for a goal. Must be a day ending in “Y”.

And of course, the empty netter at the end. The Monsters pulled their goalie really early, with nearly seven minutes left, in the hope of bringing back a three-goal deficit. Unfortunately, it didn’t seem like their heart was in it as they never really made the Marlies worry about getting scored on. For the most part, the final five minutes or so was just a contest to see which Marlie will hit the empty net from 190 feet out. Eventually, it was Carcone who found the goal, his second of the game and second of the period.

Sheldon Keefe liked his team’s process in the first period a lot, despite the scoreline. He thought they put together a strong foundation in the game and was glad that they were able to carry that momentum at even-strength into goals in the second. “We were just encouraging the group to stay with it and don’t get discouraged.” Keefe also talked about how much fun his boys were having in the second period, and how surprising this run has been. “It’s a combination of experience and hunger.”

Mason Marchment loves being back with his boys from the Kid Line, “I wouldn’t want to play with anyone else.”

Trevor Moore echoed the statement from Keefe about the first period. He felt that the team was in the offensive zone a lot, working the puck and making plays. In particular, his line and the Pierre Engvall line. “We never felt out of it.”

And, of course, the Game in Six minutes.