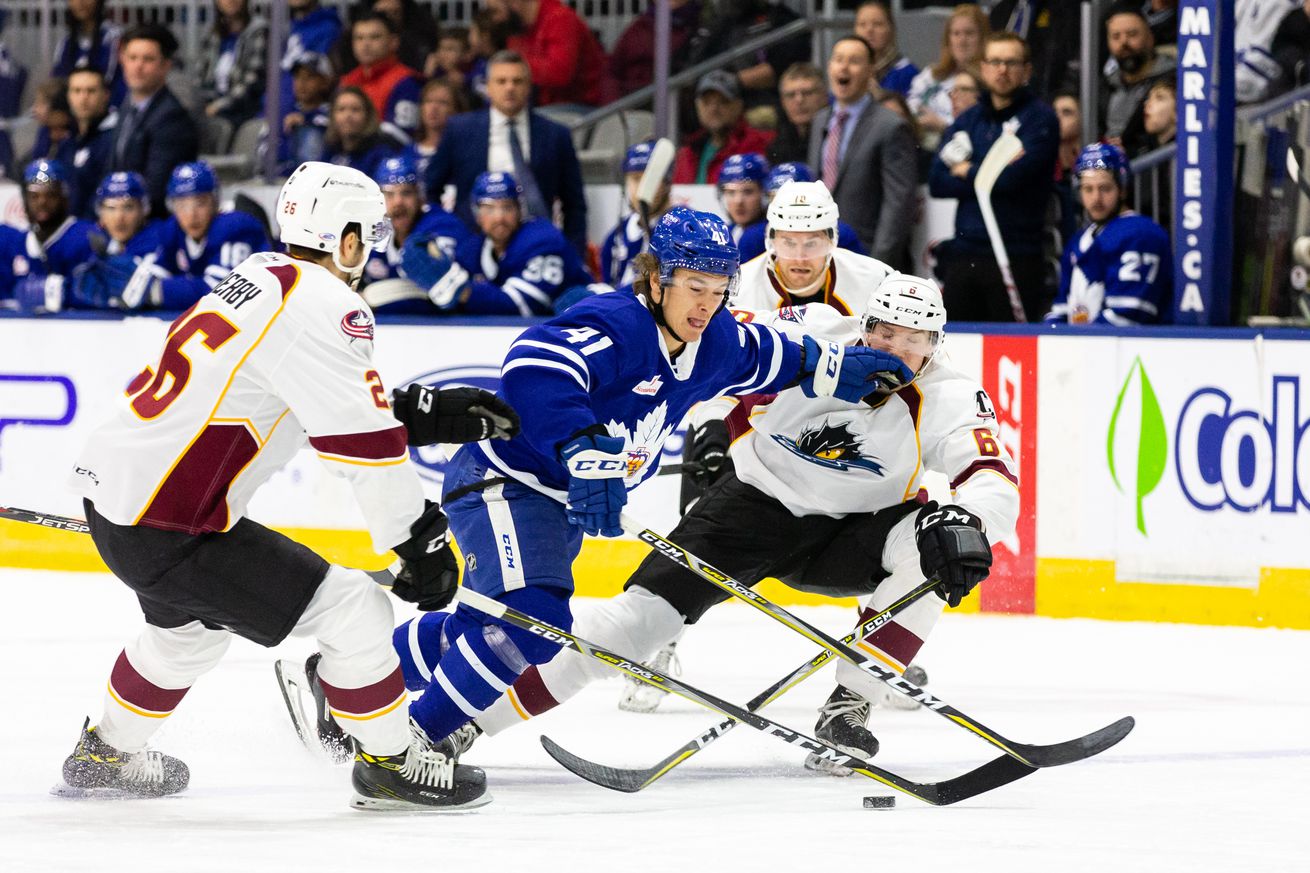 The Marlies have gotten a big boost at the top end of their lineup and look poised to make another run at the Calder Cup.

After dispatching the Rochester Americans in three games during their first-round series two weeks ago, the Toronto Marlies have set their sights on the Cleveland Monsters in the second round. The Marlies have compiled a group of veterans and young stars with high potential into a very cohesive unit and they look very capable of repeating as Calder Cup Champions in 2019.

Before we get ahead of ourselves, let’s have a look at the best-of-seven series against the team from Ohio. Who have the Marlies added, how are they playing, and what does the opposition look like. In order to help me with the final section of this preview, I called on fellow AHL reporter, Elaine Shircliff from the Columbus Blue Jackets SB Nation website Jackets Cannon to provide some insight and context into who the Monsters are and how they see this series going.

One advantage Toronto has over Cleveland is their NHL team is not in the playoffs anymore. Sorry for turning the knife. Either way, the Marlies look a lot better now than they did in the last stretch of the regular season — which was pretty good in and of itself — so adding the following four players should be a massive boost.

Rosen joined the Marlies for game three against the Rochester Americans and provided a really big impact to the team all the way down the defense corps. Rasmus Sandin had been playing as the top left defenseman for months while Rosen was on the shelf with his injury before hanging around in the NHL. That time allowed Sandin to grow significantly and be a more responsible player in the AHL. Now that Rosen is back, Sandin is on the third pair and is now allowed to play in offensively leveraged situations, similar to the Dermott role in the NHL. That step in depth will only improve everyone’s numbers.

Moore is too good for the AHL in every area he excels in. Head coach Sheldon Keefe now has another top option for the penalty kill, for the power play, for holding leads late in games, and another weapon that Jeremy Bracco can pass to in the offensive zone. He and his centre on the first line, Chris Mueller, can also do a lot of the heavy lifting in the defensive zone, where Bracco is admittedly weak. Players like Dmytro Timashov and Nicolas Baptiste both had chances with Mueller and Bracco on the first line, but neither of them could do much for the trio other than be a passenger. With Moore there, they have three legitimate threats.

The Toronto Marlies don’t have many NHL-calibre wing prospects in the AHL. Among the eight wingers the Marlies have been practising with, less than half have the experience, potential, or skill to play in the NHL now or in the near future. There are a lot of older prospects who seem to have found their ceiling and haven’t been able to step it up to a higher level. That’s where Korshkov comes in. He may not get in the lineup for game one, but he’s new, fresh, and exciting blood that could be a real x-factor in this series and how the Leafs see their prospect pool moving forward. Korshkov is a big body with good speed and strong finishing capabilities in the KHL, and according to Katya (who has actually watched him all season) he may be able to slide right into the AHL game seamlessly.

Kasimir Kaskisuo did a great job for the Marlies while Hutchinson was filling in for Garret Sparks. He played well, posting a .960 save percentage (four goals against on 101 shots in three games). That said, Hutchinson has been the better, more consistent, goalie all season and will start in game one. Goaltending depth cannot be stressed enough, and it’s good that the Marlies have it.

As of Monday, here are the lines the Marlies ran in practice, courtesy of former PPP editor in chief Scott Wheeler:

Over the past week of practices, Keefe has been very pleased with former Soo defenseman Mac Hollowell’s play for the team. He’s transitioned to the AHL fairly well, albeit in a fully-sheltered role on the third pair with a responsible partner in Sandin. With Rosen, Liljegren, borgman, and LoVerde taking the brunt of the competition and minutes, those two kids should have a lot of fun on the third pair.

It seems a lot of people have forgotten about Timothy Liljegren, but he’s been a first-pairing AHL defenseman on the right side all season long (when he was healthy). This is his second full season in the AHL, and he’s already become a very capable defenseman in his own zone, controlling the physical aspect of the game very well, especially with a mentor like Rosen next to him.

Friends with the Monster

And finally, here is a conversation I had with Elaine Shircliff from our sister site, Jackets Cannon, about how the Monsters look heading into the series against the Marlies and how they view Toronto from their end. Elaine asked me some similar questions about the Marlies for her series preview, which you will be able to find at their website. It will be linked below when it becomes available.

1.) What are some of the strengths and weaknesses you’ve seen from the goaltending throughout the regular season and playoffs? Brad Thiessen has been the starter in the playoffs, is there a chance he loses his job at any point?

Barring an injury *aggressively knocks on wood*, Brad Thiessen will be the starter until the very end. Matiss Kivlenieks is a little too green. Especially from a playoff standpoint. Even though Kivlenieks is a second year pro, he still makes rookie mistakes. I haven’t heard of time table for Jean-Francois Berube’s injury from March. If Berube were cleared to play during the playoffs, I can’t see the Monsters having him start a game off the bat. So, as of now, Thiessen is the starter for the foreseeable future.

Thiessen only has a few weakness. Which is why the Monsters have been able to ride him through the push for playoffs and into the second round. He’s not perfect, though. One of Thiessen’s biggest flaw is the fact he occasionally gets a little ballsy with play. Sometimes he wanders far from the net to make a play. Leaving the net open for any period of time against a fast team like the Marlies is like watching an intense game of chicken.

2.) Do you expect the Monsters to have to play a physical game or a more speed/skill game in this series? Do the Monsters have a preference?

In my opinion, I’d rather play a more physical team. If the Monsters don’t roll lines during the series, they tend to quickly tire against a speedy and skillful team. I feel as though the Monsters are able to maintain control of their emotions and the momentum when the game gets aggressive. But then again, the Monsters like to surprise me. So, they may do well against a predominately speedy and skilled team that doesn’t focus on aggressive play.

3.) Beyond the obvious candidates (Gerbe, Dalpe, Letestu), who might be a threat offensively in this series?

Well unfortunately, Marlies fans will have to wait awhile to see Nathan Gerbe. As far as I know, Gerbe is out for the rest of the season with an undisclosed lower body injury.

Sonny Milano has been a man on a mission in the playoffs. His six points over the course of four games only scratches at the surface. Milano quarterbacked on a slew of plays during the first round. When a player stops caring about fancy goals and starts thinking about the bigger picture, amazing things happen.

Another player of note is Mark Letestu. He has quietly been putting together a standout postseason performance. Plus, Letestu works well with the younger guys and teaches them the fundamentals on a nightly basis.

It should also be interesting to see how Liam Foudy plays now that he has the scoring monkey off his back. Foudy was an integral part of the Monsters 3-0 win over the Crunch.

4.) Are there any players on the Monsters you think the Marlies will grow to hate?

Kole Sherwood. He’s aggressive and skilled. The only problem is, once Sherwood turns on the aggression, there is no way to turn it off. He will also do whatever it takes to make a player pay for their transgressions. In the same token, Sherwood is like the Energizer Bunny. Once his energy level goes up, it takes a lot of bring it back down.

There is no way this series gets wrapped up in under six games. In the regular season, five of their eight games went into overtime. So, I’ll be shocked if we don’t see at least two overtimes over the course of the series. If the Monsters can get their special teams together, they will be the ones to take down the Marlies.