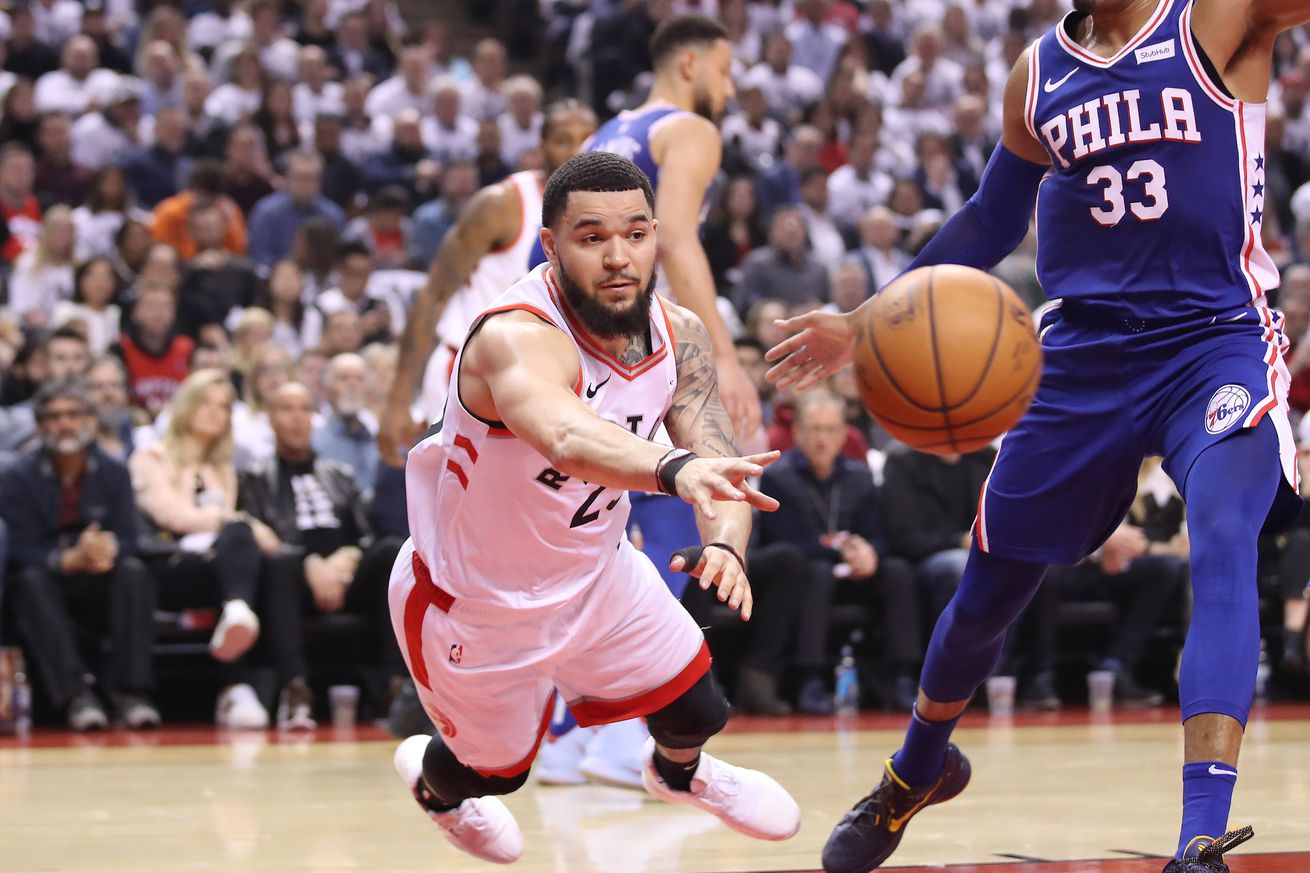 Toronto knows Fred VanVleet is a gamer, but the things he’s supposed do be doing, he hasn’t done so far in the playoffs. Do his similarities to Kyle Lowry make him a liability?

On February 8th, the Toronto Raptors made their final all-in move of the season. Trading Jonas Valanciunas, C.J. Miles, a 2024 second round pick, and Delon Wright to the Memphis Grizzlies for Marc Gasol.

At the time, the biggest concern around the move was how big of an upgrade Gasol was on Valanciunas. But as the post-season has played on, the biggest question maybe should have been: did Masai Ujiri deal the wrong point guard?

Would the Toronto Raptors be a better playoff team with Wright and Gasol, instead of Fred VanVleet and the Spanish big man?

Now, caveats must be laid. I have no idea if VanVleet intrigued the Grizzlies, or if they just valued Wright more highly, or even if Fred’s larger contract made the trade math too difficult.

This also isn’t meant as a slight to VanVleet — a hard-nosed defender, a solid shooter, and an adept play-maker. (Remember, it wasn’t so long ago we were saying he was the key cog to Toronto’s bench mob.) In the playoffs though, little things matter. And that’s sort of the problem the Raptors are facing right now — being little. At least in the back-court.

The Raptors’ primary guards are tiny by NBA standards, and certainly by playoff standards. Lowry is listed at 6’1”, VanVleet is 6’0”, and Norman Powell is 6’4”.

By contrast the Magic ran out 6’1” D.J. Augustin, 6’7” Evan Fournier, and 6’6” Michael Carter-Williams. Philly has 6’4” JJ Reddick and 6’10” Ben Simmons, and has mostly handed the back-up point-guard role to 6’8” Jimmy Butler. If Toronto gets past the Sixers, they’d likely face significantly larger back-courts in Milwaukee and Boston as well.

Of course, basketball is more than just a game of “line-em up and see how tall they are” — otherwise Manute Bol would have a fistful of ring — but height does matter. That bears out when you see how Lowry and VanVleet’s numbers fall from the regular season to the playoffs.

As well as the Raptors have played this post-season, the dirty little secret of the team is that, yet again, they’ve gone from being an elite regular-season offensive team to an average one. Their 108.8 rating places them eighth out of the 16 playoff teams.

Kyle Lowry’s offensive ups-and-downs are well known, so we don’t need to dive any deeper, except to say that he has been better in the last couple of post-seasons. (Even as he continues to lift the Raptors’ overall plus/minus consistently when he’s on the court.) VanVleet though goes from being a shockingly close facsimile of Lowry in the regular season, to a sub-par player that sees his offense completely dry up.

The reason is simple. VanVleet struggles to make and generate shots in the post-season. He goes from averaging almost 13 shot attempts per 36 minutes to just over 10 in the playoffs, and his percentages from all over plummet.

It’s not just that VanVleet is facing longer, better defenses in the playoffs, it’s also that he and Lowry play a very similar style of game. That’s good for offensive continuity, but it makes it easy for the defense too. The same counters and match-ups you run against Lowry, are going to be similarly effective against VanVleet.

Toronto doesn’t have any change-of-pace options at the point. They lack a lighting quick guard who can shred defenses at the point of attack, and they offer up little size to shoot or finish over defenses.

Fine. Small guards struggle. But is there any real reason to believe the Raptors would be better with Wright taking VanVleet’s 22-odd minutes a game?

The first thing to note is that these numbers strip out Wright’s time in Memphis so that we can get as close to an apples-to-apples comparison as possible. The second thing — though these are rate stats so it doesn’t matter as much — is that VanVleet’s sample size is about 20 percent bigger (he’s played 3,500 Raptor minutes to 3,000 for Wright).

It’s clear from the above though that Wright is at least VanVleet’s equal in the regular season.

Their effective field goal percentages are basically the same. Wright owns advantages in offense and defensive rating, and his Win Shares per 48 are also higher. (If you prefer a different all-in-metric VORP prefers Wright as well 2.8 to 2.3.) Wright’s edge, besides surprisingly sawing off the shooting comparison, is his ability to grab rebounds, and snag steals and blocks.

Of course, VanVleet not only shoots the three better (.396 to .353), he shoots more of them, creating a spacing advantage Wright can’t match. VanVleet also has a better AST/TO ratio (about 3.6 to 2.8), meaning he likely helps limit transition buckets against.

In the playoffs, things get worse for VanVleet though. While the sample sizes are tiny (Wright has 348 minutes, and VanVleet, after Game 2, has 300), the division is stark.

As we discussed above, VanVleet’s shooting numbers crater. The Raptors offense dries up. Their defense gets worse, and VanVleet’s WS/48 are cut nearly in half.

Wright, on the other hand, keeps his shooting (the increased three point accuracy is likely a quirk of small samples), and while his defense regresses as well, the Raptors offense is regular-season dangerous with him on the floor. Facing better competition his WS/48 naturally decreases, but is much better than VanVleet’s.

Again it’s his height and athleticism — Wright can still grab rebounds, and effect the game defensively through blocks and steals at a higher level than VanVleet can. On offense, he has the burst and length to put pressure on the defense by attacking the rim.

VanVleet’s spacing edge probably still applies, as even though he’s missing there is a value to those shots and the gravity they create. Though playoff Wright is a tad gun-shy, overall the numbers bear out the idea that Wright has handled the playoffs better in his young career.

However you cut it, the idea that VanVleet is a far superior player doesn’t hold water. I get it though. The narratives between VanVleet and Wright couldn’t be more different. VanVleet, the after-draft after-thought, who through hustle and marksmanship made himself into a Sixth Man of the year finalist. Wright, the first round pick, who was always older than you thought, and was beset by injuries and inconsistency.

But Ujiri and coach Nick Nurse are paid to see through narratives. Yet both of them may have failed. Nurse seemed unwilling to invest in Wright from day one, refusing, even when VanVleet struggled earlier, to move Wright up in the rotation even though his predecessor had shown that as a clear road-map to get the best out of Delon.

For whatever reason, Ujiri didn’t see, or didn’t care that Wright gave the Raptors something they lack — length and penetration ability from the back-court. Instead he doubled down on shooting at the expense of size and versatility.

Against the Sixers, Wright would have given the Raptors another weapon to use to hunt JJ Reddick on offense. He’d offer more switch-ability on defense (he’d shown that he can use his length to credibly defend Ben Simmons), he can attack downhill — something neither Lowry or Van Vleet, or even Powell, are consistently capable of. And while he doesn’t offer the shooting VanVleet does, we’ve yet to see that VanVleet actually provide that shooting in the playoffs.

As the playoffs progress, the small cracks become larger as teams repeatedly hammer at them. The Raptors lack of back-court size is causing a fissure. Ujiri and Nurse had a potential solution staring at them. The fact they both missed it may come back to haunt their basketball team.