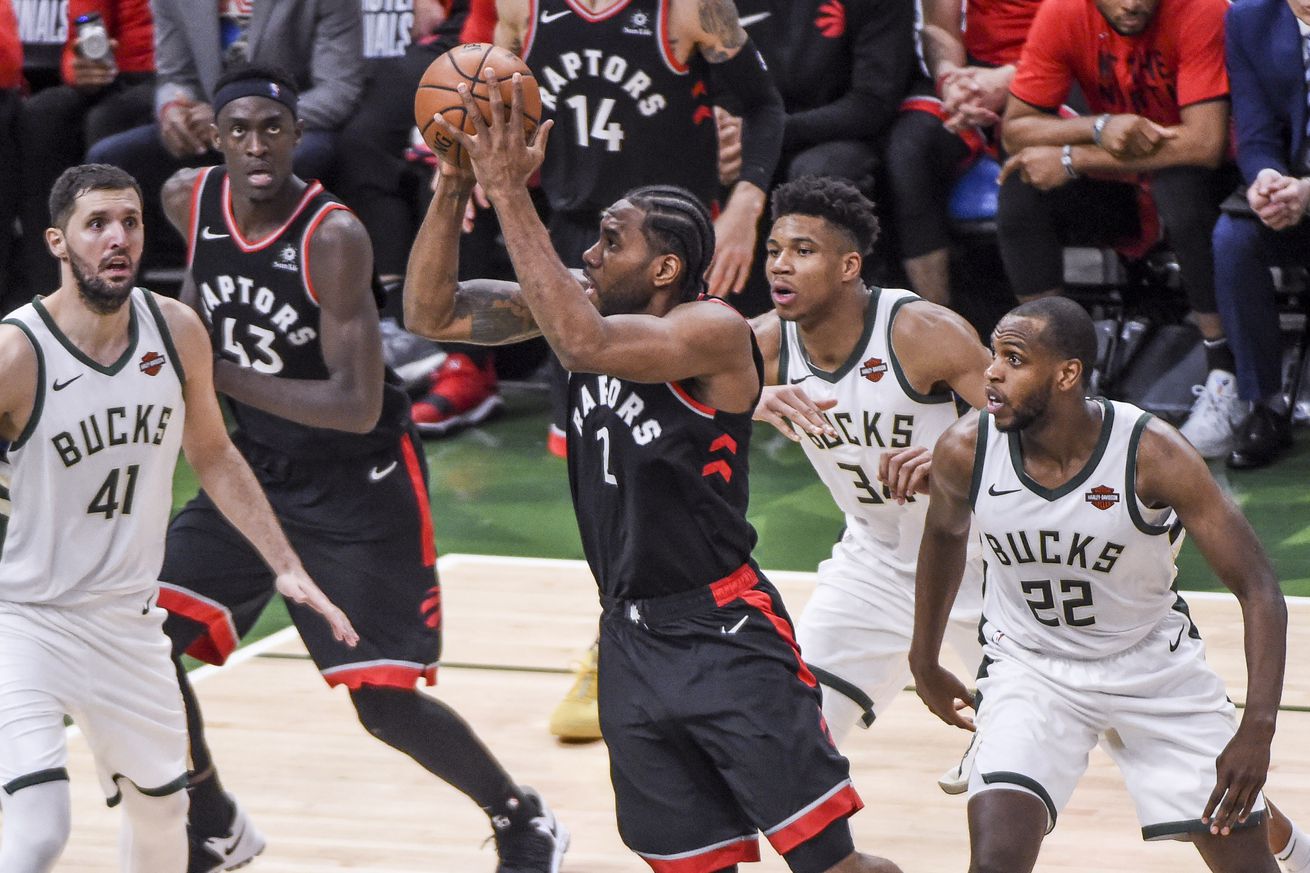 The Raptors gave an A1 effort, but their tired legs caught up to them, and the Bucks shook off the rust just in time to take the W.

Last night’s opening game of the Eastern Conference Finals between the Toronto Raptors and Milwaukee Bucks was an interesting case study in the old “rest vs momentum” debate. The Raptors looked crisp early, were executing their game plan on offense and were locked in on defense, while the Bucks were cold, slow getting into their actions and were getting beaten on the glass.

But as the game went on, it all flipped: The Raptors (not named Kyle Lowry) slowed down and started missing everything, the Bucks started pulling in all the rebounds and hitting their shots… and ultimately, ran off a game-sealing 10-0 run in the final three minutes as the Raptors ran out of steam.

Kyle Lowry is my Favourite Son

I was on the radio in Chicago yesterday, where I loudly proclaimed my love for all things Kyle Lowry to the Windy City, and boy did he do me proud last night. There are far too many awesome Lowry moments to go into (no lie: If the Raptors had won, this column was going to be my five favourite Lowry moments from last night) so I’ll just focus on this thing of beauty.

That clip actually cuts off the beginning, where Kyle probed baseline first before pulling it out, then looked like he was going to post up Eric Bledsoe before doing a quick spin, going full Nash along the baseline, emerging on the other side. He circled around before dumping it to Marc Gasol, then floated back toward halfcourt, took the bullet pass back from Gasol and buried the deep three pointer.

This is all in response to Bledsoe scoring seven straight points, of course.

Kyle Lowry Over Everything. Forever.

Three Raptors Scored in the Second Half

Kyle had 21 of his 30 in the second half yesterday, and Leonard had 16. Pascal Siakam chipped in with, uh, four, and everyone laid the big ol’ goose egg.

And things looked positive in the first half! Every Raptor scored, and Marc Gasol, Danny Green, Norman Powell, Fred VanVleet and Serge Ibaka combined to shoot 8-for-16 for 24 points. It looked like putting the massive bodies of the 76ers in the rearview mirror was freeing the Raptors up to play loose, to get space to step in to their shots, and let fly with confidence.

Those six players missed all 15 shots they took after halftime.

Obviously you have to credit the Bucks’ D for some of this; as noted above, they were able to sustain their energy all game. But VanVleet and Powell can’t use the “tired” excuse; they’ve barely played, and Green didn’t play much in Game 7 against Philly either.

Leonard’s been shouldering a massive offensive load for the Raptors, and Kyle stepped up to help last night. They’re gonna need a little more.

Despite facing a rested team that likes to run, the Raptors once again did an excellent job on the defensive end, most notably on Giannis Antetokounmpo. Sure, he still finished with 24 points, 14 rebounds and six assists, but Toronto made it difficult; the Raptors did a great job collapsing on him, particularly early. By getting to him at the point of attack, near the three-point line, they took away many of his “euro-step through the lane” opportunities and forced him to give the ball up earlier — earlier, perhaps, than his teammates were expecting, which may have accounted for all those missed three-pointers (The Bucks were 11-for-44 from downtown).

This swarming attacked (and the large hands of Kawhi Leonard) also forced Giannis into five turnovers.

If there are going to be any adjustments between games, you can bet Mike Budenholzer is scheming up ways to get Giannis the ball in more space (and I wouldn’t count on Milwaukee missing 33 three-pointers again).

We Really Let Brook Lopez Do That, Eh

It’s not a bad idea to try and lock Giannis Antetokounmpo down and make guys like Eric Bledsoe, Nikola Mirotic and Brook Lopez beat you.

Lopez finished with 29, including 13 in the fourth; he had a dunk, a three-pointer, a block and two rebounds during that game-sealing 10-0 run. The Raptors simply couldn’t keep him off the boards (he had four offensive rebounds and created at least two offensive rebounds for others by occupying multiple bodies).

Marc Gasol’s quickness, defensive smarts and ability to read angles was a big help in limiting Giannis’ effectiveness last night. But he needs to be able to get big on the glass when the Raptors need rebounds.

That Was a Really “Clean” Basketball Game

This seems like an odd compliment, but last night’s game was very aesthetically pleasing. There was no egregious flopping or selling of calls; the head snaps and flailing arms and flying bodies were kept to a minimum. There were no shouting matches with the officials, and while there were missed calls (the Bucks had an uncalled 24-second violation; Kawhi Leonard mugged Giannis on an offensive rebound) I don’t think there were any bad calls and overall everything seemed even.

Meanwhile both teams played at a fast, up-and-down pace, there were mini-runs all throughout the second half, five lead changes in the fourth quarter… and we got to unexpectedly awesome performances from Brook Lopez and Kyle Lowry.

I hope that was a preview of the rest of the series, because if so we’re in for a fun one.

Stealing a game from the Bucks in Milwaukee wasn’t going to be easy, and there’s a sense the Raptors blew a good chance last night: They got an all-time classic KLOE game, played a great defensive game against Giannis, and watched Milwaukee fling a ton of bricks… and still lost. But if they can keep up that defensive intensity and get a more well-rounded offensive game going, then heading back to Toronto 1-1 isn’t an impossibility.