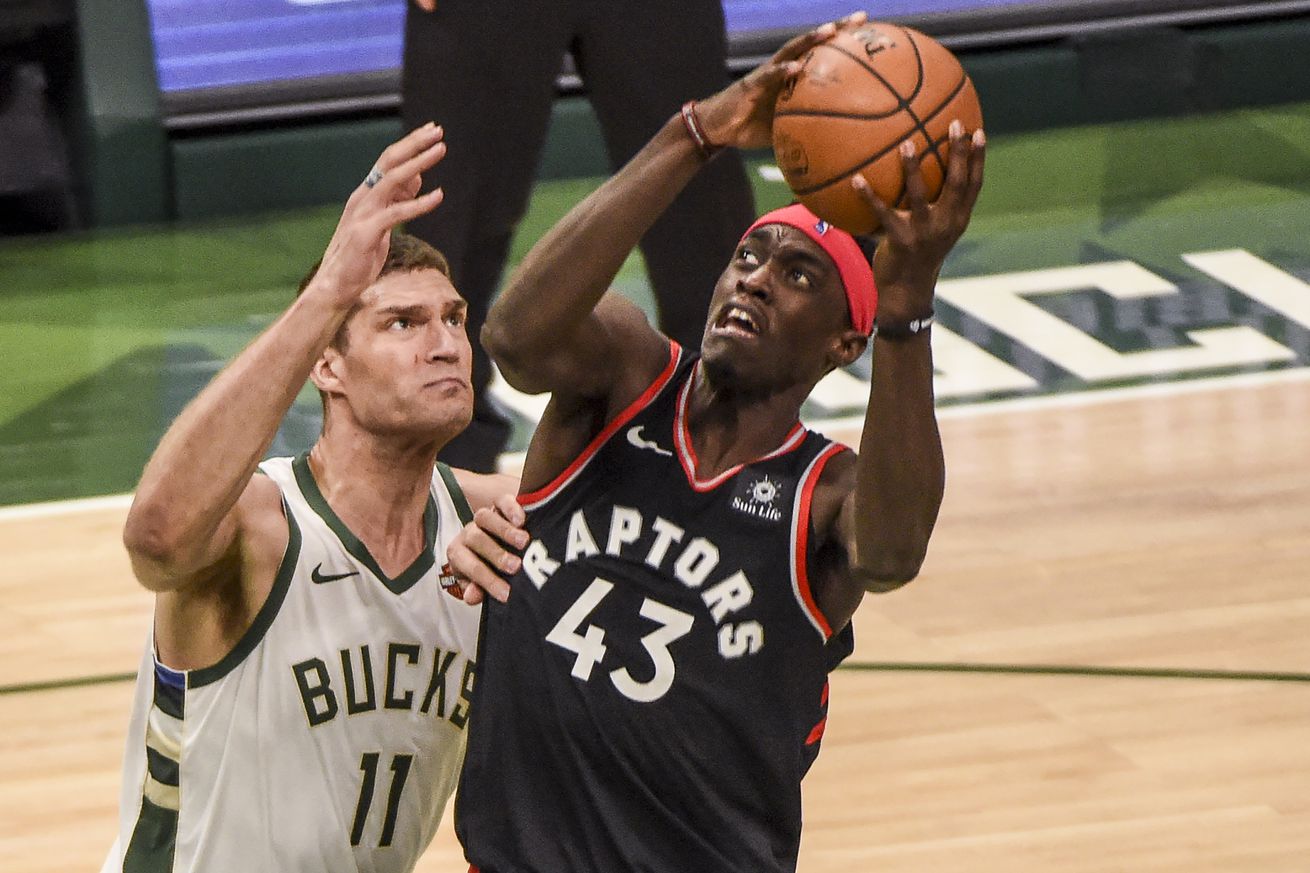 The Raptors have their work cut out for them as they head home to Toronto down 2-0 to Milwaukee.

Well, it wouldn’t be a Raptors playoff series without at least one embarrassing loss, would it? An unprepared Raptors team got run off the floor early by the Bucks last night, and despite a better second-half effort, couldn’t overcome Milwaukee’s stifling defense.

This Ain’t a February Matchup Against the Hawks

This is the Eastern Conference Finals, and the Raptors are up against the best team in the league. So why are they screwing around, throwing lazy passes, sagging off of shooters on defense, and waiting for rebounds to come to them? Picking up dumb offensive fouls on screen and loose ball fouls on rebounds and in the open floor?

I’m not the first person to mention this, but there definitely was a huge “feels like the Cavs last year” vibe to these proceedings — a tough loss in the opening game that the Raptors probably should have won, and the hangover from that weighing them down into Game 2… and then getting blown out as a result.

And yes, obviously the Raptors played better in the second half, and I was glad to see that. But coming out unfocused and going down big early on the road is a recipe for disaster.

I didn’t think it would happen this year thanks to all of the new faces, particularly Kawhi Leonard; he doesn’t seem like the type who allows anything to affect him from one game to the next. But perhaps that kind of hangover feeling is universal.

Put The Bench In Position to Succeed

I wrote about this in the Philly series, but the Raptors need to find some way to get more from their bench, especially if they’re not going to get anything from Marc Gasol and Danny Green.

Norman Powell, Serge Ibaka and Fred VanVleet didn’t suddenly become bad basketball players; we saw last night in the second half, they can play. But it’s harder for secondary players like Powell and VanVleet to succeed in higher leverage situations like the postseason. (Ibaka has been through these wars. I don’t know what the deal is with his inconsistency right now.)

I hate playing armchair coach but limiting the amount of time these guys play at the same time, and getting them more time with more starters, might be a good place to start. For example — playing VanVleet with three or four starters, including Pascal Siakam and Marc Gasol, might take some playmaking responsibility off his shoulders, allowing him to be more of a shooter. Playing Powell with Kawhi Leonard and Siakam may give him more space to operate. Ibaka should only play with Kyle Lowry, as they have a clear chemistry that VanVleet and Ibaka just don’t.

Perhaps getting VanVleet and Powell in earlier — at the five minute mark — for Lowry and Danny Green would work? Milwaukee goes to their bench at about that point, as did Philadelphia.

I know the starting unit has been awesome as a group, so cutting their minutes together sounds a bit crazy — but Toronto needs more from the team as a whole.

Get your Good Guys Going

With all of that said, Toronto’s not going to win a damn thing if Kawhi Leonard and Pascal Siakam can’t get going.

Leonard was 4-for-5 in the first half last night for 11 points; everybody else combined to take 36 shots. While normally I like even shot distribution like that, the non-Kawhi Raptors have proven they’re not exactly willing or confident — or, frankly, capable — in their shooting right now. So, Toronto needs its best players — Leonard and Siakam — to take the lead.

Part of that means finding ways to get Leonard a little more space to go to work with better screens. I’m not sure if it’s Leonard or if it’s the screens — and surely some of it is Milwaukee’s length and effort — but anytime the Raptors screen for Kawhi this series, it doesn’t seem to be working — he and the screener are either jumbled up, or the screen simply isn’t effective and his defender is still right there. Perhaps some more off-ball screens before the ball gets to his hands, with him catching it on the move, would help free him up.

As for Siakam: He’s got to help himself. At one point in the fourth, with the game technically still in reach, he was isolated on (ahem) noted defender Nikola Mirotic on the wing… and he simply swung the ball. Didn’t even consider taking Mirotic off the dribble. I’m sure there are some things the team can do to get Siakam the ball in space, going to the rim, but mostly I think Siakam just has to get his head back in the game.

Having a Centre that Can’t Jump Might be… Problematic

Boy, Marc Gasol had a rough night. Perhaps the most cringe-worthy moments came early in the first, when he had two great looks blocked at the rim because… he can barely get off the ground when he shoots. Of course, a couple plays later, he couldn’t reach down to grab a low pass from Kawhi Leonard… basically, Marc Gasol looked like he was about 90 years old in the first quarter of this game.

Marc ended up taking nine shots in the game’s first 25 minutes — more than any other Raptor to that point — missing seven of them, and getting benched for most of the second half. This is probably for the best for Marc, because he clearly needed a break, but not so great for the Raptors, because they need Gasol, and because Ibaka, as noted, is still up-and-down.

If the Raptors can’t get more from the centre position, this might be a very short series.

I’ll leave it to smarter writers to quantify just how many times Ersan Ilyasova has killed the Raptors, I just know it’s been too damn many, and I know I really didn’t want to see it happen in the postseason.

Is there a guy on Blake’s list that looks less likely to be a Raptor killer? Geez. And some of those shots he hit in the first half were ridiculous. He caught one pass at his his ankles, Ibaka was in his grill, he brought the ball up over his head and shot a leaning-back three-pointer that dropped.

I mean, what are you even gonna do? The guy took three charges too! I hope Bango runs him over in that damn Harley.

Meanwhile, at least on our side, we got a good Norman Powell game (14 points on nine shots). Do Bucks fans say the same thing about Norm that we say about Ilyasova? Man, just wait until we get to Game 5! (Please make it to Game 5).

Right, so now that we’ve gotten the obligatory embarrassing loss out of the way, can we get on with making it a competitive series? Game 3 tomorrow night is obviously a must-win for Toronto.