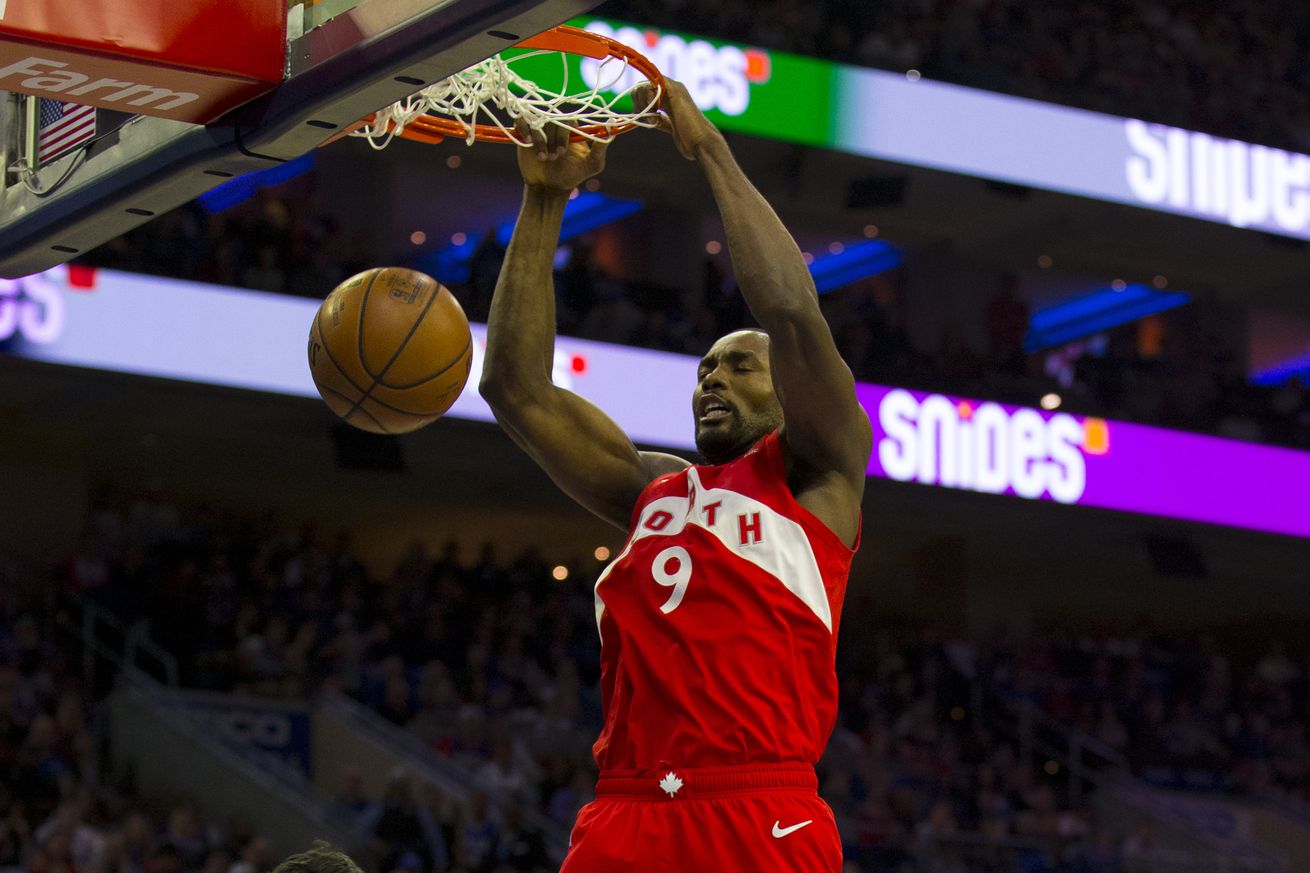 In a must-win Game 4, Kawhi Leonard came through — and he got just enough help from his teammates to even the series with Philadelphia

That was one heck of a basketball game. Neither team had control for more than a minute or so at a time. Both defenses were locked in. Star players made clutch plays. Every rebound was a rock fight. Unheralded bench players made timely plays.

And the good guys won!

It was one of the biggest, most important games in Raptors history, and our guys came through. How awesome is that?

I don’t think these thoughts can start anywhere other than Kawhi Leonard’s game-breaking three pointer.

What is there to say? That’s just an unbelievably huge, clutch, Sam-Cassell-dance-worthy bucket. And it’s such a Kawhi Leonard shot, too. Calmly navigates around the top. Gets his feet square. Rises, leans back — just enough to get away from Joel Embiid’s reach, not too much to make the shot too difficult — and sticks it. In about the highest pressure situation imaginable.

That’s what he’s here for.

(Biggest shot in Raptors playoff history? I’m still taking Alvin Williams’ big bucket against the Knicks in 2001; similar basket in that the Raptors had the lead, and there was about a minute to go in both cases. But Alvin’s clinched a series — the Raptors’ first ever — on the road, no less. The stakes with Leonard’s free agency and the Raptors’ playoff odds might be higher, but for franchise importance, hard to beat that. I’ll give ‘em 1 and 1A.)

Yes, More of That Defense, Please

While we mostly focused on the offensive side of the ball in Game 3 — mainly that Kyle Lowry and Marc Gasol needed to score more and help Kawhi Leonard out — it was the Raptors’ defense that really abandoned them. 116 was the most points they’d given up and 51% the highest opponent field-goal percentage they’d allowed in a game this postseason.

So it was great to see the defense from the first round, and Games 1 and 2, return yesterday. The offense was better too — Lowry and Gasol both scored more, and overall the team shot 35-for-76, and 10-for-31 from three, compared to 35-for-83, and 7-for-27, in Game 3 — but those numbers aren’t exactly world-beating. The D made a huge difference; seeing the Raptors get to their spots, draw charges, get their hands on loose balls and recover well on shooters — basically, all the things they didn’t do in Game 3 — was great. Redick and Butler hit some tough shots. Embiid, under the weather, barely made an impact on offense. Ben Simmons couldn’t get anything going. Tobias Harris led the team in field goal attempts, including 13 three-pointers, and if I’m Toronto, I’m more than OK with that.

Something I want to see a little more of from Toronto is them getting the ball up the floor more quickly. Not necessarily fast breaks — just pushing and getting into the offense more efficiently. The Sixers aren’t an overly fast transition team, and there are a lot of cross matches on defense, so pushing the ball can pay dividends.

The 76ers actually did a decent job of this themselves in the first half last night, getting into their sets quickly and keeping Raps on their heels — it led to a couple of JJ Redick buckets — while the Raptors were content mostly just to walk it up. One play in the second had me yelling “GO!” at the TV: Embiid rolled in for a dunk, and stood there preening to the crowd — a perfect opportunity to push after a make. And Gasol held the ball out of bounds. And held it. And then handed it to Lowry. Who walked it up. Grr.

Marc Gasol and Serge Ibaka shared the court for 23.4 minutes last night, which I think has to be a record for them. Some of it was driven by Pascal Siakam’s injury of course, but some of it — I would assume — was driven by Philly’s size. Either way this was a good call by Nick Nurse.

Obviously Tobias Harris is a tough matchup for Ibaka on defense. But, I actually feel like the 76ers don’t make it as tough as it could be; with Ben Simmons and Embiid they tend to clog the lane a bit, giving a guy like Harris less room to take a bigger, slower defender like Ibaka off the bounce; this means Harris settles for a lot of shots (see the 13 threes mentioned above). And on the other end, Ibaka did a great job establishing deep position and getting a couple of easy buckets on Harris.

And it helped on the boards; although the Raptors still gave up a couple of questionable offensive rebounds to the 76ers, yesterday marked the first time in the series they weren’t out-rebounded (both teams collected 43 boards).

If Siakam is back (or closer) to full strength in Game 5 I’m not sure how much of this we’ll see… but I hope we haven’t seen the last of it.

As noted above, yesterday’s game had a classic playoff game feel, with bodies all over the floor, guys fighting for loose balls, scrambles, crunchy screens, hard box-outs… all the gritty, scrappy stuff that should make a perfect game for a guy like Fred VanVleet, who’s had to fight and claw and scrap to make it this far in his career.

And yet once again VanVleet was invisible. The Raptors blew a double-digit lead as soon as he came into the game in the first quarter, and he didn’t register in the box score — no points, rebounds, assists, steals, or turnovers, one foul and two missed shots — in seven minutes. Oh, and he ended up a -6 on the night. (Credit also to Nick Nurse for splitting up VanVleet and Lowry; that small backcourt was killing them on the boards.)

It hurts me to say it because I am a big VanVleet fan, but I wonder if it’s just time to bench him. I know there aren’t any other real options, especially if Jeremy Lin is hurting, and Lowry can’t play every minute. But if the Raptors have to split the backup PG minutes with Patrick McCaw and Norman Powell? I’m fine with giving that a go. (Heck, did you see Norm run the pick-and-roll with Gasol last night? He dropped a perfect pass to Gasol, and Gasol actually shot and scored!)

I still believe in VanVleet; we’ve all seen it with him before, he’ll have a game where he hits a couple and his confidence will come back. But the Raptors can’t wait on that in the postseason.

I think it’s about time the Raptors had one of their hot-shooting games in Game 5, don’t you? A nice 16-of-33 from downtown, coinciding with their stellar defense? Put our minds at ease heading back on to the road? I’d like that.