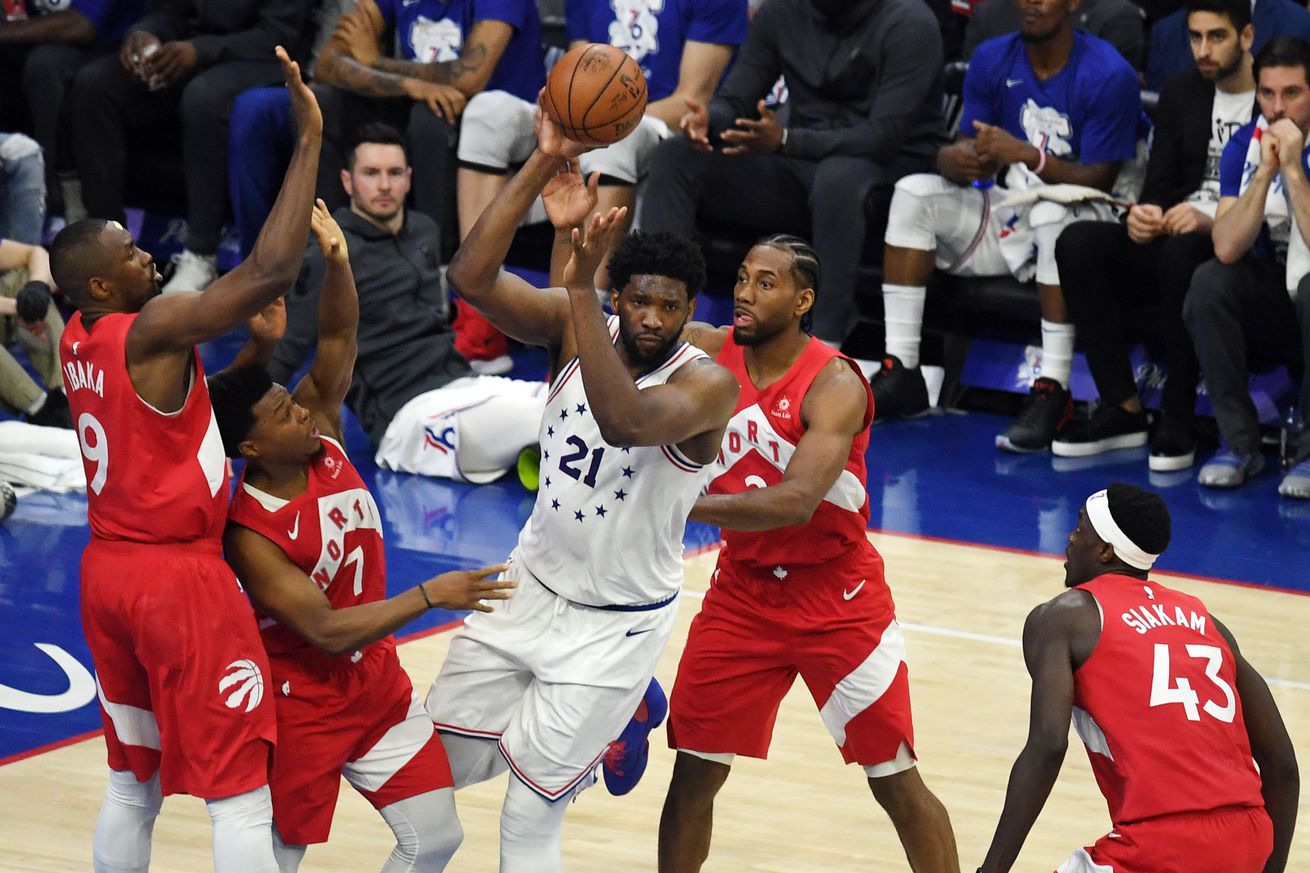 After a frustrating road effort, we’ll see the Raptors back home on Sunday… for Game 7.

I guess we knew it wasn’t going to be easy. But was it wrong to hope that it would be? I really, really didn’t want this series to go seven games.

But, Jimmy Butler and Ben Simmons were magnificent, Joel Embiid had a Kyle Lowry-esque impact without scoring much, Toronto couldn’t keep anyone off the glass and couldn’t hit a shot, and well… that’s how you end up with another lopsided loss in a series that’s had its share of them.

The Raptors Did Not Come to Play

There were a ton of plays last night that you could point to, on both ends, to demonstrate how poorly prepared the Raptors were for this game or with how little urgency they played. But I’d like to point to one play with about 8.5 minutes to go in the game.

Philadelphia is up 22. It’s desperation time for Toronto: That time where you have to make one last push before packing it in for garbage time.

Toronto has possession. Serge Ibaka has a mismatch on Jimmy Butler on the left block; Pascal Siakam gets the ball to him. Butler pokes it away… and instead of just picking the ball up, Ibaka tries to let it roll out of bounds. Butler reaches around, knocks it away from Serge, and Philly takes it the other way.

All Ibaka had to do was pick up the damn basketball. He couldn’t even muster the energy to keep Butler away from it. I don’t want to take anything away from Philadelphia, because they earned that win, but that’s all you had to know about Toronto’s effort last night.

The Raptors missed 14 three pointers in the first half. 14!! They finished the night 9-for-36 from downtown. The Toronto Raptors. Who led the league in 3-point shooting after the All-Star break. 9-for-freaking-36.

They’re now shooting 30.8% from downtown in this series. And again, this isn’t the defense: They’re shooting 39-for-121, or 32.2%, on wide-open three pointers (defender six-plus feet away) in this series. Post-All-Star, that number was 45.7% for the Raptors. (And the 121 wide-open three-pointers given up by the 76ers is the most of any team in the second round.)

What is there to say, really? Sometimes shots don’t go down. Or maybe it is the moment getting to them: In the playoffs, the pressure is heightened, the muscles are a little tighter, the shots just a little bit rushed…

Either way: It’s cost them big-time in this series. And it may cost them a chance at the Conference Finals.

The Raptors Squandered the Gift of the Boban

For some reason, Brett Brown saw fit to use Boban Marjanovic as his back-up big man last night, and it kept the Raptors in the game early. After a slow start where the offense looked, ah, less than crisp, Toronto picked it up as soon as Joel Embiid came out and Boban came in, going on a 10-0 run.

But, Nick Nurse let his “big lineup” — with Serge Ibaka in at power forward alongside Marc Gasol at centre — stay out when Marjanovic came in. As soon as Gasol sat, Embiid came back in, and guess what? It was a 10-0 Philly run.

The same thing essentially happened in the second quarter; the Sixers easily won the minutes Embiid was on the floor (even with Gasol on), and got killed when he was off.

But even with that gift, it wasn’t enough. And it’s not like it was Embiid himself killing the Raptors; it was everyone else. But they follow Embiid’s lead; the defense has to tilt towards him, he has gravity on both ends and demands constant attention — including from the officials.

It would have been easy to jump on Nick Nurse for not matching Gasol with Embiid on that early run. But, that was a smart move by Brown to quickly sub Embiid back in after Gasol went out, and Gasol already had one early foul.

In the second half though? When the 76ers (obviously) went away from Boban, played Embiid extended minutes… and Toronto still ran out Ibaka to guard Embiid for an extended run? There’s no excuse for that.

Speaking of Going Away from What Works

The Raptors didn’t target JJ Redick at all last night, which is odd, since it worked last game, and, you know, every other team that plays the 76ers employs it as a strategy. It’s also odd that we saw more minutes for the Norman Powell and Fred VanVleet combo, and the Kyle Lowry and VanVleet combo, even though we know those units are too small to play the bigger Sixers lineups. (And, also that Powell and VanVleet have been pure garbage the entire series, and were once again completely outplayed by Mike Scott and James Ennis III. But, you can’t play five guys 48 minutes!)

So what are the adjustments that are going to make the difference in Game 7? Brown seems to have finally stumbled into the Mike-Scott-at-the-five idea that Twitter has been telling him about for three games now, and given Scott’s history of being a human blowtorch against the Raptors, that might be the move that wins the series. What does Nick Nurse have up his sleeve — besides, perhaps, going back to the things that won Game 5 — for Game 7?

If we’ve learned anything from this series, it’s that we know nothing. That’s four blowouts in six games! The adjustments, on both sides, have been slow to come, and hardly inspiring when they do — it’s the old “these guys are playing checkers, not chess” thing.

So what to expect? Toronto has home court; the 76ers are an average road team. At some point, you have to think the shooting will come back around for Toronto; and, at some point, doesn’t one of Fred VanVleet or Norman Powell have to hit a couple of shots? And they do have Kawhi Leonard, the best all-around player in this series.

For the 76ers, their size will continue to trouble Toronto, and Tobias Harris has been quiet, so he might come on; there’s always the possibility of an Embiid offensive explosion too. And Jimmy Butler remains terrifying in big games.

I’m going to lean towards some of those shots finally dropping for the Raptors, Kawhi Leonard being a boss, and the Raptors taking the series at home.

For that to be the case we’ll have to see a better effort than last night — especially early. And we’ll need the crowd behind the team as well. 7:00 p.m. folks! Let’s make it loud.