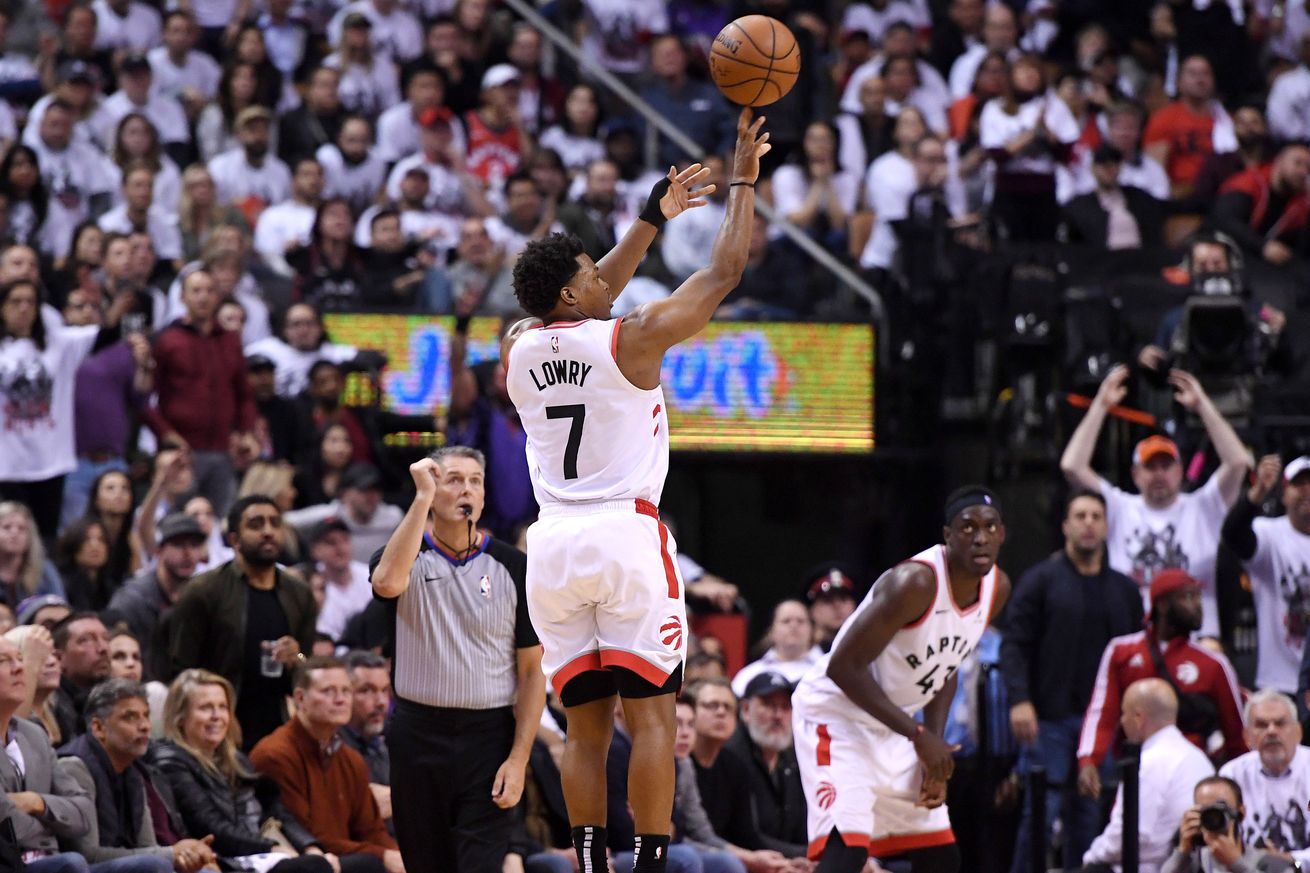 In Game 1 against the Bucks, a heroic effort from Kyle Lowry was wasted by, well, pretty much everyone else on the Raptors.

Unfortunately, Game 1 didn’t quite go to plan for the Raptors. For their opening contest in Milwaukee, it was close right up until the end; but with Toronto leading going into the fourth quarter, the end result is quite disappointing.

Unlike the 76ers series, there are not as many obvious key matchups to watch here for the Raptors. Until something along those lines develops over multiple games, we’ll stick with taking a quick look at some dominating factors in the game — in this case, a loss for the Raptors.

Kyle Lowry was awesome in this game. He posted 30 points (on 18 used possessions), mostly on the strength of not being able to miss at all. Throw in eight rebounds and that’s a heck of a night for the point guard.

But on a night where Lowry was carrying the scoring load, he wasn’t able to distribute much (only two assists to his four turnovers), which was likely the game plan for Milwaukee. Lowry punished them for that as much — and more than — as could be expected, but his needing to carry such a load led to one of the rare games where the Raptors lost his minutes on the court. Yes, Lowry was a -10 on the night. But more on that later.

The problem was mostly that Lowry did not get any support. Leaving aside Norman Powell, who hit a couple of shots in his less than 10 minutes, here are the Raptors’ rotation players and their TS%, both on the night and for the regular season.

To put that more plainly, the collection of players not named Lowry, Leonard or Powell went a combined 12-of-46 from the field, including 5-of-24 from 3.

Add in Leonard, who posted his own 31 points and nine rebounds, but took an uncharacteristic 33 possessions to do so, and Toronto’s offense just was not up to keeping up to the Bucks in this one.

Overall, the Raptors generated only a 98 ORTG on the night, and that’s just not going to be good enough against the Bucks. Toronto could get away with surviving with defense alone against the 76ers, but Milwaukee will score regardless of what the defense does. What’s more, Game 1 might represent the best job Toronto’s defense can do on Milwaukee, holding them to only a 107 ORTG themselves, essentially turning the Bucks into a below average offensive team.

Now here’s a concerning trend. Take a look at the on-court net ratings of each rotation player for the game.

That bench. We saw the rather ugly return to those all too familiar heavy-bench lineups with all three bench players on the court at once. The lineup data tells the tale of this one. Here are the most used lineups in Game 1 (all lineups with over two minutes played).

Overall on the night, Toronto’s three bench players played together a total of 10 minutes and were a -6. That’s no good, and should be easily preventable.

What might be more concerning is how ineffective Serge Ibaka in particular was in this game. He struggled beside the stars — Lowry, Leonard and Ibaka played seven minutes and were a -11. He struggled beside the bench, as noted. He struggled at power forward beside Gasol (-8 in 12 minutes). Heck, even his usual bread and butter pairing with Lowry was a complete disaster (-19 in 9 minutes). Overall, Ibaka was a by-far team worst -17 in his 17 minutes.

The Raptors completely fell apart on both ends in Ibaka’s minutes. Their ORTG in that time was a dismal 77.1, which was at least in line with the poor showing from all three bench players. But their defense was just as bad with Ibaka on the court (129 DRTG), and that number puts Ibaka in a completely other category compared even to the other bench players — the next worst on-court DRTG on the team was VanVleet at 115, while Ibaka’s direct sub Gasol posted a 97 DRTG.

If this continues, the Raptors may need to go smaller against the Bucks, and limit Ibaka’s minutes to the bare minimum needed to give Gasol a rest. This is a concerning start to a series where it was seemingly more reasonable to think Gasol’s importance would be reduced relative to the last two series where he needed to play as much as possible to defend an opposing star centre.

Perhaps in Game 2 Ibaka rebounds, and finds the form that helped him have a huge part in leading the Raptors to their Game 7 victory over the 76ers. If he doesn’t, though, and continues to struggle on both ends in a series that seems made just for him, I don’t know what else the Raptors can do but shrink his role as much as possible.