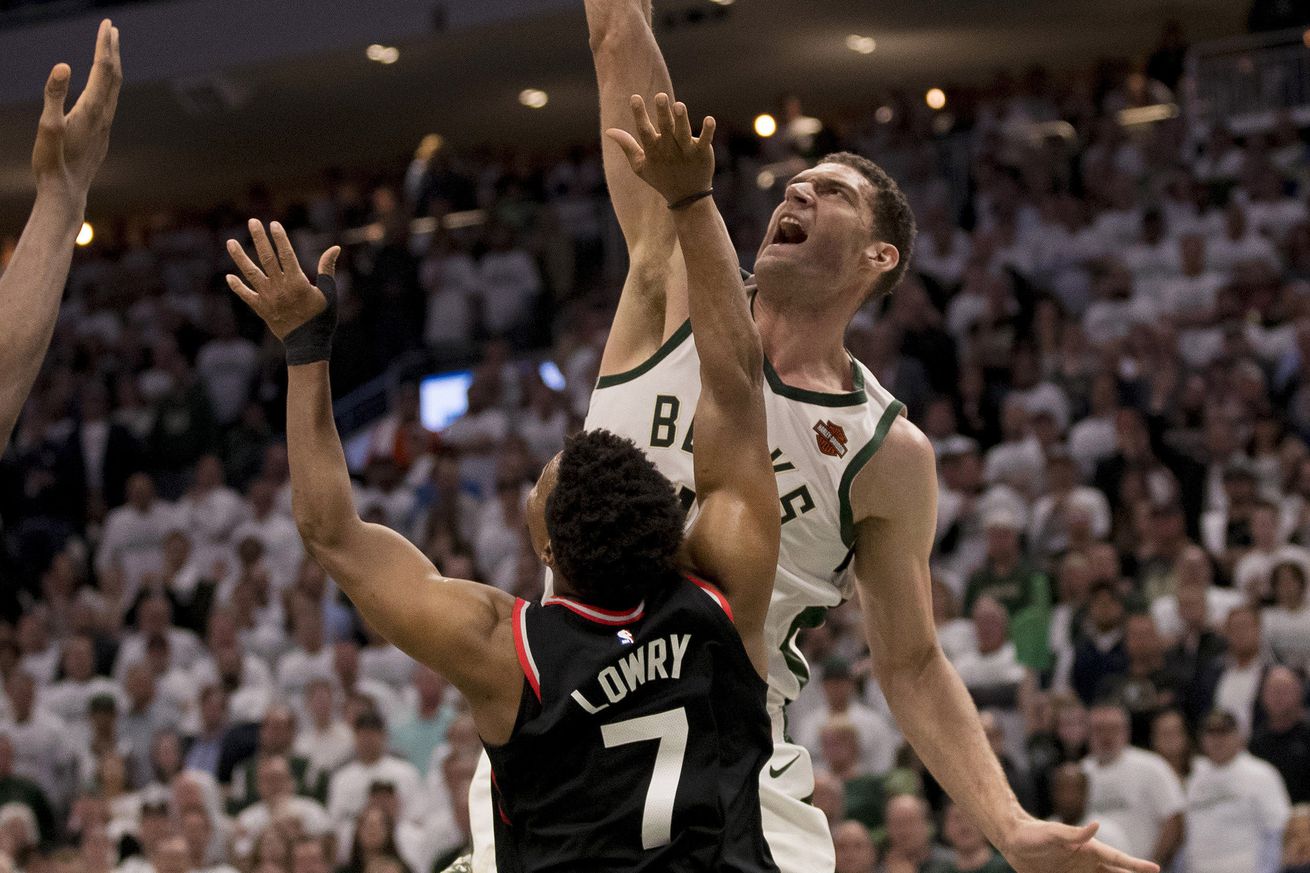 Toronto began Game 1 playing nearly flawless two-way basketball. However the ghosts of Game 7 came knocking late, as the Raptors looked gassed down the stretch and were undone by Brook Lopez.

There’s a lot to like about the way the Raptors played in their Game 1 loss to the Milwaukee Bucks on Wednesday night. But the fourth quarter unfortunately produced some of the worst basketball we’ve seen from this crew so far this postseason. Heading into the final frame, the Raptors held a seven-point lead — circumstances which produced a 24-1 record during the regular season — but then they were outscored 32-17 by the Bucks en route to a 108-100 defeat.

Aside from Kyle Lowry (the most unlikely candidate for the hot-hand, finished with 30 points), the Raptors failed to make a single shot in the final frame (Toronto was 0-for-15 beside Lowry’s 5-of-7) as they saw their lead disappear and quickly turn into an eight-point gap they just couldn’t make up. It appeared to be a simple diagnosis — the entire starting five lost their legs and fans were treated to a clinic of misses that was almost unprecedented.

Marc Gasol finished the game 2-of-11 on the night after knocking down a couple of momentum shifting threes in the first half, and Danny Green continued his streak of miscues on the offensive end — finishing the night 1-of-5, with six points total. Lowry, who shot 10-of-15 from the field, including seven threes, was the only Raptor who ended the night making at least half of his shots. Kawhi Leonard, Pascal Siakam and the combined efforts of the bench shot 21-of-61. When that happens, the Raptors will rarely win a ball game. That’s what the good news is here: Toronto’s defense was stellar yet again and kept them within striking distance even after things fell apart completely.

The Raptors did a fantastic job all night of making Giannis Antetokounmpo uncomfortable and keeping him out of the paint. The MVP candidate shot 7-of-16 from the field for 23 points — numbers well below his averages. Most of the help on Giannis came from Marc Gasol, who often left Brook Lopez to help Pascal Siakam defensively. The Raptors came into tonight ready to accept a high-usage Lopez game, as the long-range big man has struggled all postseason to make his open shots.

Wednesday unfortunately was not one of those nights. Lopez poured in 29 points on 12-of-21 from the field, including three fourth quarter three-pointers that would ultimately be the difference in the game. Of all Milwaukee players, I like the potential results associated with forcing Lopez to be a volume shooter the rest of the series. Defensively, Toronto did a great job limiting the real threats — Khris Middleton, Eric Bledsoe, and Giannis — by forcing the ball out of their hands and into those of players that aren’t accustomed to the role. Still, it was not fun in the moment to watch Lopez lumber into a dagger three to put the Bucks up four (104-100), and to watch Toronto never score again.

Nevertheless, there’s a lot to like about how Toronto approached Game 1. While it’s a really tough pill to swallow considering the game was basically theirs to close out, this is one the Raptors had no real expectation of winning. Instead they put Milwaukee on notice that this wouldn’t be a cake walk.