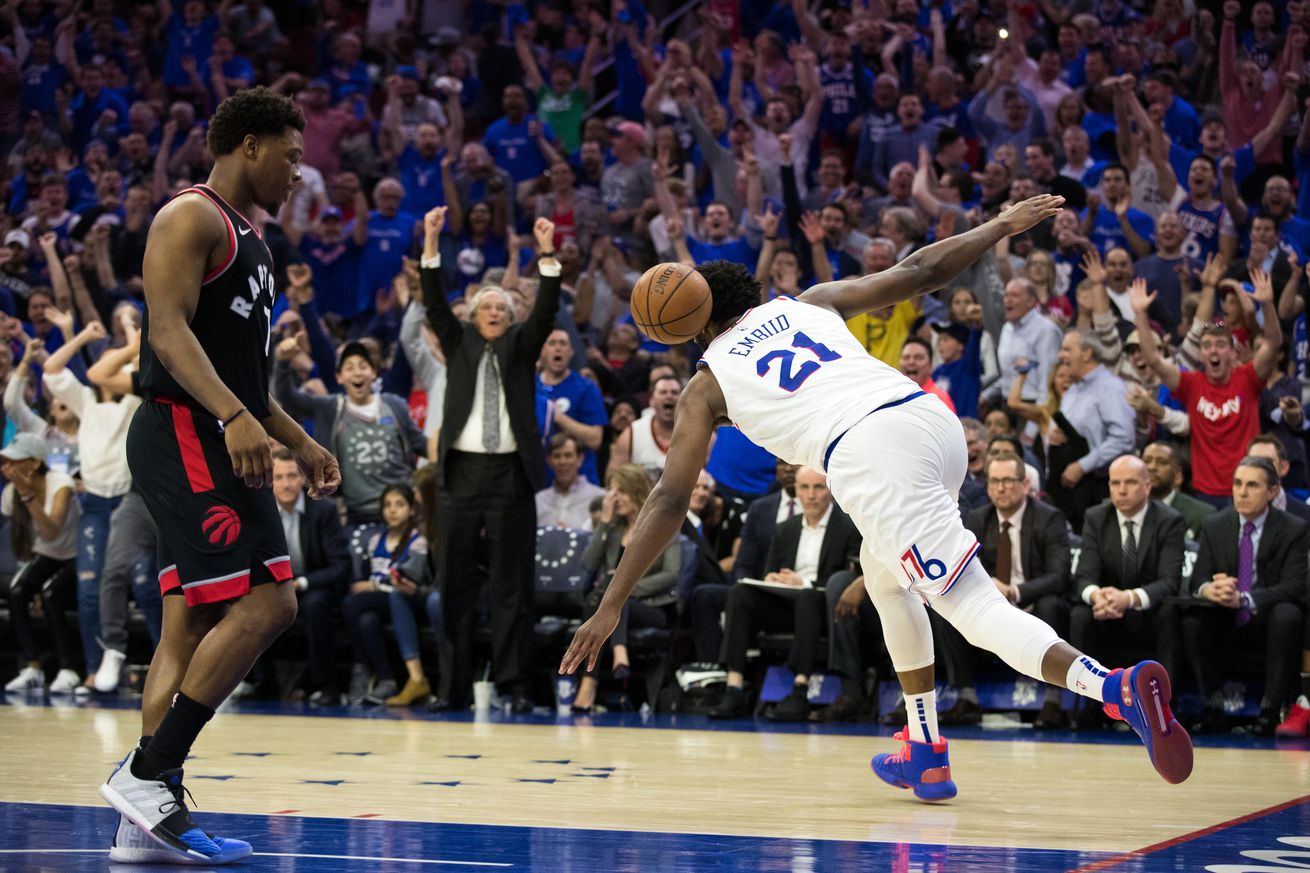 Thanks to absolutely terrified play from most of the team, Toronto lost Game 3 in truly horrifying fashion. The turning point? It may have happened before this game even started.

It’s perhaps a cop out to suggest that the turning point of Game 3 in the playoff series between the Raptors and 76ers happened before tip-off, or the day before yesterday, or perhaps somewhere back in Game 2. There’s even a compelling case to be made it happened back in 2001 or 1995 or, like, at the dawn of time when an asteroid hit the Earth. That’s not the point of this column though; it’s supposed to be about something that happened within the 48-minute span of a specific basketball game.

And yet, we just can’t help getting sucked into this existential abyss again. The Raptors were up 1-0 in their second round series against the Sixers after stringing together five straight strong playoff games. (Yes, they mostly came against the Orlando Magic, but they still count.) They had found a variety of ways to win, everyone was doing their part, and they truly looked like a well-oiled machine ready to take on the world. After Toronto’s whip-ass play in Game 1 vs. Philly, high on life, I even wrote this — and I truly believed it!

But the abyss still looms nonetheless.

The Raptors entered this series as the clear favourites, and they had the manpower and know-how to win. Game 1 cemented that feeling. Game 2 was a disappointment, but it could be reasoned away — if Toronto had just made a few more shots they usually make, if maybe coach Nick Nurse changed his rotations just a little bit, if this happened instead of that, if if if. But now we get to Game 3. There’s just no way to disguise the fact that Thursday night’s contest was a disaster, the worst possible outcome for the Raptors.

Not only did Philly win, they won by doing the exact things they needed to do to eliminate Toronto from the playoffs. They played with size and toughness, they muscled their way to the glass, they pressured the Raptors’ bench, and they dared literally anyone on the team not named Kawhi Leonard to be brave and hit shots. On top of that, their giant centre Joel Embiid, who looked not himself in both Games 1 and 2, suddenly appears to be fully healthy, flying around the court and ruining the lives of everyone in his path. I do not enjoy writing these words, but it is indeed what happened.

Now, we could most definitely talk about the collective collapse of Toronto’s bench, with the trio of Fred VanVleet, Serge Ibaka, and Norman Powell failing to have any real positive impact on the court at all. Or we could address the inexplicable play of both Kyle Lowry and Marc Gasol, the team’s veteran warriors who have been in exactly these types of situations more than once. (After a quiet playoff, Danny Green was quietly effective in Game 3, so we’ll let him off the hook for now.) Or we could try to understand where exactly Pascal Siakam is at these days — yes, he’s come a long way, but is there anything else he can do? And of course, we could ask what Nurse is doing with the Raptors’ lineups, what he could differently, what he’s not considering, what he’s wrong to consider, etc. The list of concerns just goes on and on.

But that sidesteps the true root of the sorrow and pain here, and it is this: the Raptors are still being the Raptors, despite having Kawhi and being as good as they’ve ever been as a team in franchise history. It’s not that we didn’t think beating Philly would be easy. It’s the playoffs! We knew there would be tough games, we knew a run to the Eastern Conference Finals, or the NBA Finals, or the title, would come with serious setbacks along the way. We knew this — and presumably the team knew this too.

What’s disappointing is that the Raptors are still finding some way to lose in the most embarrassing way possible, still standing idly by as the exact worst case scenario hits them square in the face. Their games can never be hard fought battles with one team grinding out a win over the other, or have a lucky break going one way or the other, or contain one superlative performance just slightly overcoming their own. No, for Toronto to lose, they must be humiliated, destroyed from within just as much as without. They must be made to question everything about themselves, and made to stew for days in a mess of their own design wondering how in the world they’ll ever pull themselves out.

The joke here is that Kawhi was supposed to be the guy who could lift the Raptors out of this. The “um, what hump?” quote from him was his way of saying that Toronto’s doomed post-season history doesn’t mean anything to him, there is no weight to shuck off, no mountain to climb except the one he’s always endeavouring to scale regardless of who his teammates are. And throughout these playoffs, Leonard has been everything — and more! — for the Raptors. He’s done his job to the utmost degree and it has been incredible to watch.

Except instead of elevating the squad to some new heretofore unseen plateau, the rest of the Raptors are actually dragging Leonard back down to their level. The physics of this feat are truly remarkable. Despite Kawhi’s consistently awesome play (and even the most cursory glance at his stats suggests how amazing he’s been), the rest of the Raptors are somehow… getting worse. Now Toronto, the team and the city, is looking at a 2-1 series deficit on the road and wondering how we all ended up here again. It’s why finding a specific “turning point” to Game 3 is sort of difficult. The whole thing was one massive turning point, a decision by the Raptors to warp back through time into all the worst versions of themselves.

Or fine, we can drop all that mumbo-jumbo and just admit the turning point came when Kawhi Leonard took a break to start the fourth quarter. The Raptors (but really, just Kawhi) got the lead down to a mere eight points (and then seven points after FVV hit a technical — his one point in the game — before play resumed). Leonard looked unstoppable, and was the only player that seemed to remember himself in the process of scoring 14 of the team’s 28 points in the frame. While it was still a long shot the Raptors could come all the way back, Kawhi put it at least within the realm of possibility.

But then Leonard sat down for 90 seconds, the deficit doubled, and by the time he got back on the court Siakam was tripping Joel Embiid in frustration. That’s it. That’s the game. Raptors lose Game 3, go down 2-1, and we have to do this all over again.