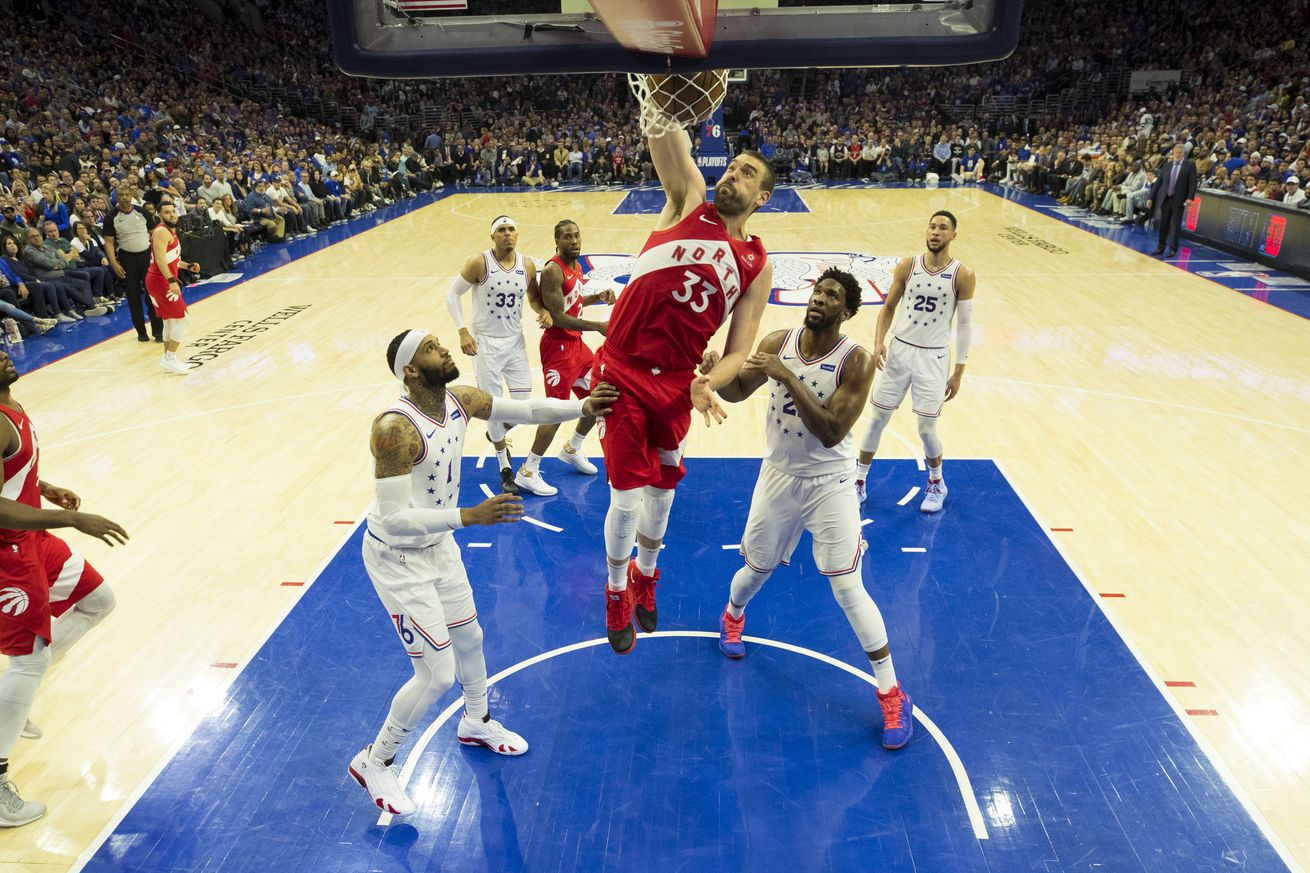 The Raptors just managed to get the crucial game 4 win. How did they do it, and what can they do moving forward to improve on it?

Well, that was a heck of a game. Tight from wire to wire, both the Raptors and 76ers pulling out all the stops, neither team shooting all that well — but Toronto came through in the end.

Let’s touch on some of the obvious Game 4 storylines and check in on some on-going issues with the series as a whole.

Kawhi Leonard put up 39 points on 30 used possessions (only an uncharacteristic seven turnovers prevented his efficiency from being even more otherworldly), adding in 14 rebounds and five assists to boot, and was a +7 in a 5-point win over 43 minutes.

Playing so much of the game, you wouldn’t think you’d be able to see the dramatic on-off court swing that has been the story for Leonard this series, especially on the offensive end. And you’d be partly right — the Raptors’ offence was only seven points better with Kawhi than without, as he was the constant for the good lineups and bad ones alike, carrying a huge load all game.

But even with that effect, the team overall was 38 points per 100 possessions better with Kawhi on the court (mostly driven by the defense, which fell apart without him for the few minutes he sat). The team once again couldn’t afford him to sit. Difference is, this time, he didn’t.

That load management is paying off.

One of the big Toronto storylines heading into this game was Pascal Siakam — specifically, whether or not he would play at all. A great sigh of relief went up when he was announced as being active, but he was also clearly limited by his injury in this game.

Siakam had an uncharacteristically inefficient game, posting only a 36 percent TS% on 20 percent usage — far worse than even the early games in the Orlando series when he was struggling with their length. Siakam was also limited to 28 minutes on a night when the rest of the starters (plus Ibaka) were used as much as possible.

Siakam’s presence alone helped the team by keeping bench players from needing to play those minutes, but the team struggled with him on the court — especially defensively, where his lateral quickness seemed noticeably absent. The team overall was 34 points worse per 100 possessions with him on the court this game, with the defense really ratcheting up while he sat (down to a 79 DRTG in those 20 minutes). This is atypical of his impact, and if he can recover and return to form moving forward, the Raptors could see a huge boost, assuming other steps forward from Game 4 hold steady.

The Raptors were against the wall in this game, and Nick Nurse shortened his rotation. Yes, an odd jumble of bench players saw the floor in the first half, with Patrick McCaw and Norman Powell both seeing early minutes, but that was that for that in the second half.

And good for Nurse, that was the right call. Only six players played 10 or more minutes in this one, as Fred VanVleet, Powell and McCaw logged spot minutes only. The Raptors’ offense completely bottomed out with any of those three on the court (65, 90 and 88 ORTG respectively), so minimizing those minutes was key.

Lowry and Gasol were the two players who most needed to step up heading into this game, with their passiveness hurting the Raps in Game 3. Between the two they did what they needed to do. Gasol finally upped his usage to near 20 percent, actually took shots when he was open and found some offense inside, for a 62 percent TS%. Lowry posted less impressive scoring numbers of 15 percent usage and 54 percent TS%, but got to those numbers with aggressive play that also led to him putting up seven assists to only one turnover.

It’s no coincidence those two players led Toronto in on-court net rating, with Gasol leading the team at +17 and Lowry not far behind at +14.

Siakam’s injury led to a lot of Serge Ibaka at power forward, a look that I personally thought we’d have seen more in the regular season. Heck, I thought we’d have seen more of Jonas Valanciunas and Ibaka play beside each other early in the season considering it worked very well last year. But, especially after the Gasol trade, when so much of the team’s production was tied up in Ibaka, finding him minutes while not sacrificing the minutes where Gasol is bringing that elite playmaking, floor spacing, and defensive impact seemed important.

We sadly only saw a limited sample of it in the regular season. In only 31 minutes total, the Raptors’ defense looking very good and the offense struggling (91 ORTG, 85 DRTG) — overall, promising enough that I expected more reps, as it was a look that could be useful.

Come the playoffs, though, Toronto was still just barely playing the pair together. Leading into Game 4, Gasol and Ibaka only shared the court for three full minutes in the playoffs, in spite of size being a noticeable issue for the Raptors against Philly.

In Game 4 they got their chance to shine, and shine they did. Gasol and Ibaka played 23 minutes together on the night, and posted a poor ORTG once again (though acceptable at 102 points per 100 possessions), but once again succeeded on the strength of the defense (91 DRTG).

Serge really found a useful role at power forward in this game. When he was at centre, once again the Raptors struggled in dramatic fashion (-38 net rating in nine minutes), which will make minute distribution moving forward, at least in this series, interesting. If Serge takes the non-Pascal PF minutes, Kawhi doesn’t need to take them. And if Kawhi is going to play heavy minutes anyway (as he should), they won’t come at PF but at SF or SG. Meaning fewer minutes for Powell or VanVleet in those roles, minimizing their minutes and maximizing the effectiveness of the rotation.

Overall in this game, Joel Embiid was a lot to handle, and the 76ers dominated the minutes he played (+21 net rating). That was even true when up against Gasol, which thankfully was most of his minutes (20 of the 24 minutes where Embiid and Ibaka shared the court, Ibaka was at PF and Gasol was guarding Embiid). Because in the 4.6 minutes Ibaka was matched up to Embiid without Gasol there, the 76ers won those minutes by nine points.

We’re seeing fewer and fewer of those minutes, but one really obvious way for the Raptors to make things easier on themselves would be to eliminate them entirely. We’ll see what happens in Game 5 on Tuesday.