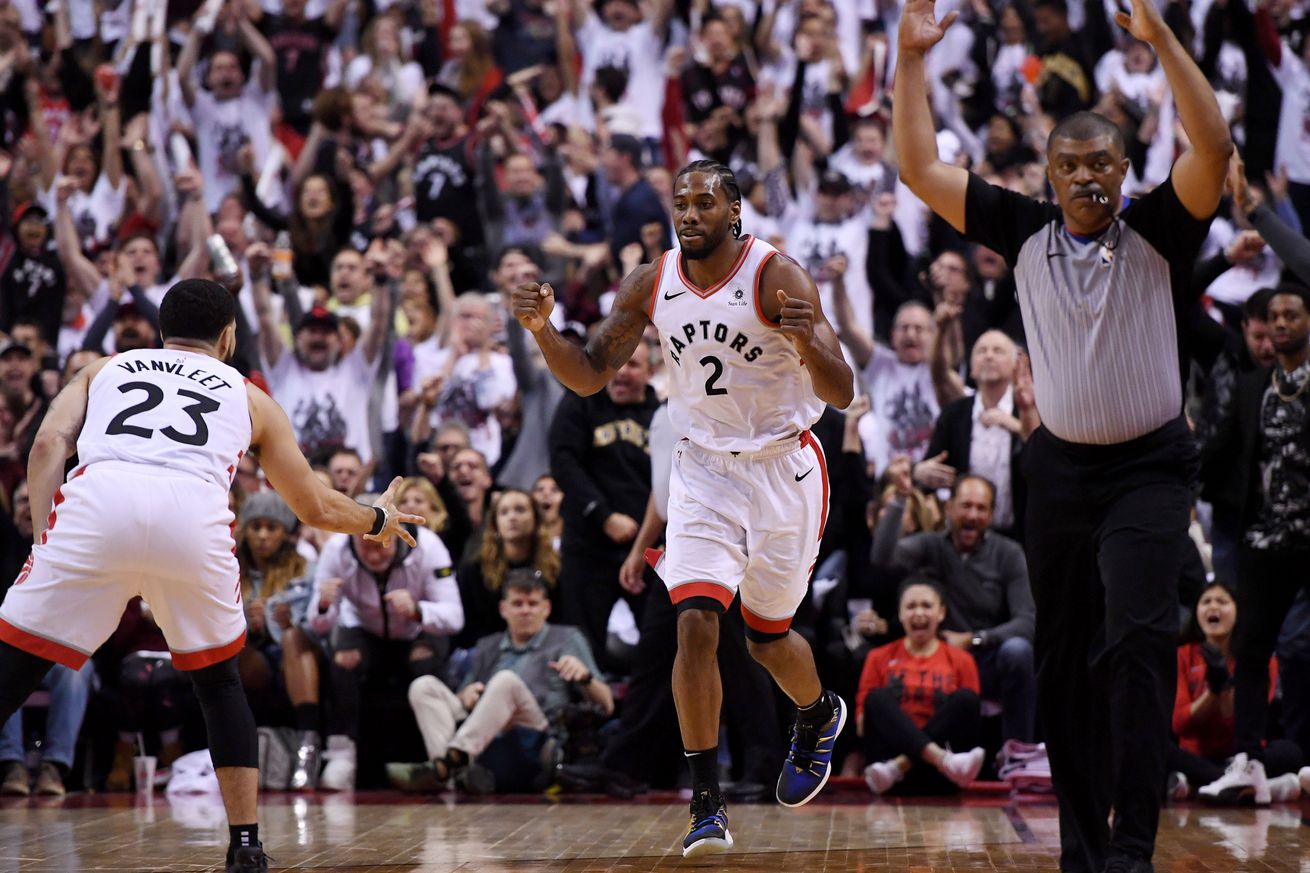 The Raptors managed to beat the Philadelphia 76ers in seven games thanks to a truly absurd shot from Kawhi Leonard. Let’s look back at the decisions in Game 7 that led to that moment.

Yeah, I still can’t believe that happened. But a lot needed to go right for the Raptors in Game 7 to even get to that last shot. There have been a few games where enough went wrong that Toronto didn’t have that chance at the end of the game.

Let’s check in on how they got to the finish line in their series with the Philadelphia 76ers in the second round of the NBA Playoffs.

It’s been a story line all series long. Joel Embiid has been by far the 76ers best player, and defending him with Marc Gasol was going to be absolutely crucial to the Raptors’ success, which became very clear after just one game, in spite of the general success of that game.

In Game 7, Nick Nurse made sure to match Gasol’s minutes directly to Embiid’s, much like in Game 5. And it paid off, keeping the Raptors within striking distance in Embiid’s minutes, close enough that by winning the minutes he rested (as they have all series), they were able to put Kawhi Leonard in the position to take (and somehow make) that shot.

Gasol matched up to Embiid for every one of his 45:11 of playing time. The 76ers won those minutes by 10 points, a testament to how dominant Embiid has been for them in this series. But in the 2:49 he sat, the Raptors were +12, another continued pattern on the series.

For the series, Embiid played 193 minutes matched up to Gasol, and posted a per 36 line of 17 points, 9 rebounds, 4.5 turnovers and a +7. In the 44 minutes Gasol wasn’t out there to guard him, Embiid’s per 36 line leaped up to 25 points, 11 rebounds, 3 turnovers and a +41. That’s not a typo, +41. As terrible as the 76ers were when Embiid sat, the Raptors handed back that advantage every minute they left Ibaka out to defend Embiid.

So, it is a very good thing the Raptors hard matched Gasol to Embiid in this one. They kept the Embiid minutes to being problematic rather than disastrous, which opened the door for the Raptors to take advantage of the few minutes of rest Embiid managed to grab. Even a few short minutes of Ibaka guarding Embiid could have ended the Raptors’ season early — good job by the coaching staff to ensure that didn’t happen.

This would be concerning if they were not getting the shots they should be getting. If they were forcing pull up threes, or taking a lot of contested threes, that would mean they were failing to generate good looks with their offense.

If the Raptors convert their open shots at the rate they did in the regular season, this series is over much more quickly. And if they want to stand a chance against a far better opponent than Philadelphia in the Milwaukee Bucks, they will need to see some shooting regression (progression?). The good news is, Toronto is generating those good looks, so there’s no reason for the struggles to continue.

The 76ers are a team that demands size. The players they play at the guard positions are big enough to cause serious issues on the boards, especially with all the help a player like Embiid demands. And the Sixers’ large forwards were also able to shoot over smaller defenders all series long. This is what made players like Norman Powell and Fred VanVleet less effective (among other things) than we have often seen from them, VanVleet in particular.

It also opened up a lineup option that I’d been advocating for since opening day this season — letting Serge Ibaka slide up to the PF position, where he had great success (in terms of winning his minutes) last season. Heck, I’d envisioned Ibaka as the starting PF this year, before Siakam’s explosion happened.

And to the Raptors’ coaching staff’s credit, after a few rough outings early in the series, we saw more and more of these big looks later on. Here are the most used lineup with both Gasol and Ibaka and how effective they were against the 76ers in this series.

Playing Siakam and Leonard at the 2- and 3-spot as scorers without the extra floor spacer is tricky to make work as seen here, but for the most part the big looks were very successful. Overall, the pairing of Gasol and Ibaka played 77 minutes and was +8 per 36 minutes in the series. They managed to grab 31 percent of available offensive rebounds and 78 percent of available defensive ones, both very strong numbers. Going big was the right call more often than not. A smart adjustment to counter the 76ers size.

The Raptors pulled out all the stops in Game 7, playing only seven players in an effort to get only their best on the court as much as possible. Serge Ibaka was a fixture in the lineup, as with OG Anunoby out it is practically impossible to go small effectively. (Never mind the apparent benefits of going very large against the also very large 76ers.) So the choice came down to Norman Powell or Fred VanVleet to sit.

The easy move would be to sit VanVleet, who has had a horrid shooting series, and on top of that has been used poorly, too often initiating plays (this has been an issue all season, but was exacerbated in this series against Philadelphia’s length) when he is better suited to an off-ball supporting role. Just look at these simple per-36 box score stats from the seven games against the 76ers.

Easy decision, right? Sit VanVleet, play Powell only as much as necessary.

But this is yet another example of simple box score statistics failing to accurately describe a player’s contributions. Powell was a train wreck in this series — lineups he played in consistently collapsed in dramatic fashion. VanVleet, in spite of his truly horrendous series, was actually a significantly more effective player, in terms of the Raptors winning the minutes he played — which is kind of the whole point.

The Raptors sat Powell, played VanVleet 15 minutes, and were rewarded with him winning his minutes, in spite of yet another brutal shooting game (0-of-5 from the field).

This was likely a marginal choice. But when the game comes down to the final shot, and down to the fourth bounce on the rim, the margins are crucial. The Raptors nailed their small choices in this one, and it made all the difference.

Going into the next round against the Bucks, these small choices, with the rotation, with matchups, with individual roles, will be crucial. The Raptors will still need their shooting to come around, but whether it does or not, they will also need to nail those small choices again to give themselves a chance to come out of the East.