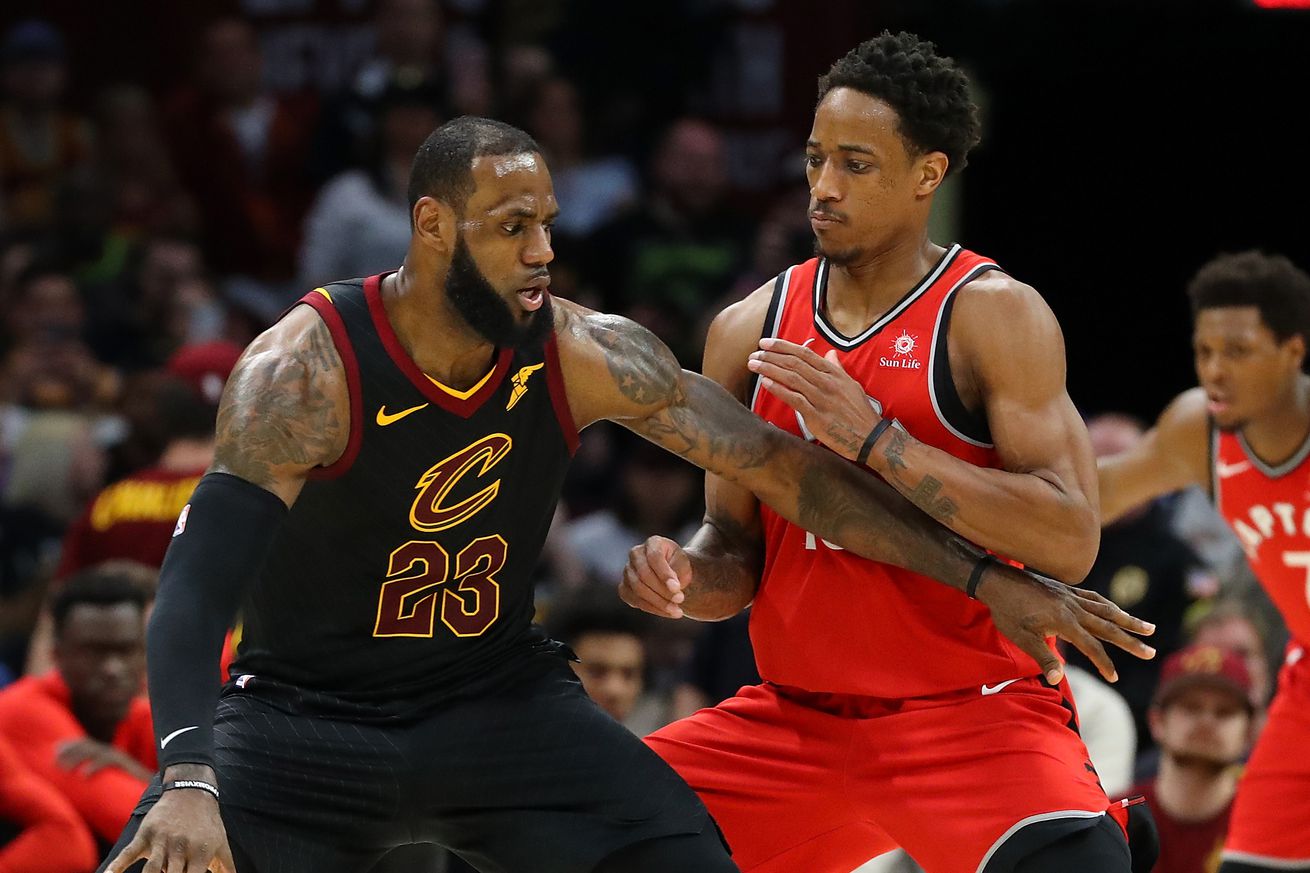 Imagine each Raptors postseason appearance was a movie. Think of the narrative, the outcome — and the villain. Now, which one is your best picture award winner?

Quarantine Rankings Season rolls on! If you’ve ever asked yourself, “If you had to make a movie out of a Raptors postseason, which one would have the highest Rotten Tomatoes score?”, then this is the post for you!

(And if you haven’t, what have you been doing in your self-isolation!?)

Here’s how this works: We’ll break down each of the Raptors’ 11 postseasons, and rate them (out of 10) in the following five categories:

Then we’ll add them up, give a final cumulative score, and rank them as such.

Oh, and just for fun, we’ll throw in a fun movie comparison as well, one that came out the same year as this particular playoff run.

Story: The Raptors follow up their promising 2014 run with a hot start to the regular season, but a shaky finish… and an embarrassing first-round sweep. 2/10

Oscar montage moment: After losing two games at home to start this terrible postseason, the Raptors gamely fought back in Game 3. Trailing by eight with 1:06 to go, the Raptors got it all the way down to three before Pierce buried them yet again, with Mike Tirico’s perfect “What did you expect… from The Truth!?” call confirming exactly what every Raptors fan knew was coming, and Doris Burke following it up with “That is a Bad Man, number 34,” just absolutely crushing our spirits. Sigh. 6/10

Best villain: Pierce. The Truth torments Toronto for the second straight postseason, claiming — rightly, for the moment — that Toronto doesn’t have “it”. 8/10

Underrated supporting character: Greivis Vasquez, whose shimmy following a game-tying three-pointer in Game 1 is pretty much Toronto’s only memorable moment from this entire series. 2/10

Final score: 19/50. This series spawned four years worth of “DeRozan and Lowry can’t do it in the playoffs” takes, with the two of them combining to shoot 36/26/79 and average a combined 32.6 ppg (after averaging 37.9 in the regular season). But hey: somehow Dwane Casey manages to avoid getting fired!

2015 movie to watch (or not): Jupiter Ascending. Just an absolute embarrassment of a film, that not one single person involved in would like to be associated with.

Story: The Raptors win a franchise-best 59 games and earn home court advantage throughout the Eastern Conference playoffs — only to run into their nemesis in the second round once again. 3/10

Oscar montage moment: Lebron James seals the fate of Dwane Casey and ultimately, this era of Raptors basketball, by banking in a ridiculous running buzzer beater in Game 3. 8/10

Best villain: James. That shot was unbelievable. But we were used to James’ dominance by now, and I could just as easily have given this to the rim that stuffed the Raptors approximately 198 times at the end of Game 1. 6/10

Underrated supporting character: Delon Wright. There wasn’t much fun to be found in this postseason, but Wright’s short-lived “feud” with Kelly Oubre Jr., that ended with Wright stuffing Oubre at the end of Game 6 of the first round, as the Raptors closed out the Wizards in Washington, was fun and hilarious. 4/10

Climax: DeMar DeRozan loses his cool, gets called for a Flagrant 1 foul and tossed out of what would turn out to be his final game as a Raptor. This isn’t how a Hollywood ending is supposed to work. 1/10

Final score: 22/50. This was supposed to be Toronto’s year. Lowry and DeRozan were healthy. Ibaka was fully integrated. VanVleet and Siakam led a difference-making bench mob. But nothing changed against LeBron, and in the following offseason, everything changed. (In other words, Dwane Casey does not avoid getting fired this time.)

2018 movie to watch (or not): The Grinch. A feeling of “hmm, have’t we been here before?” with an all-too familiar villain. Shouldn’t this be different? Why are we being subjected to this… again?

Best villain: Dwight Howard averaged 22 and 18 in this series. 22 and 18! But I’m giving this to Hedo Turkoglu, who averaged 18/8/5, received his 2008 Most Improved Player Award before Game 5, and made enough of an impression that Bryan Colangelo maneuvered to sign him a year later — with disastrous results. 5/10

Underrated supporting character: Jason Kapono. For whatever reason, Kapono decides to finally start shooting three-pointers, after spending way too much of the 07-08 season dribbling. He drains 13 threes in only 24 attempts! The phrase “too little, too late” seems more than apt. 4/10

Climax: The Raptors actually put up a decent fight in Game 5, but lose by 10. Sam Mitchell’s attempt to go small-ball by starting Andrea Bargnani and Jamario Moon alongside Bosh give us all plenty of laughs for years to come, at least. 5/10

Final score: 23/50. This is surely the most forgettable playoff series in Raptors history. Which, I guess, is the only reason it doesn’t rank lower; the others are all too memorable, for all the wrong reasons.

2008 movie to watch (or not): The Incredible Hulk. Not only does Dwight Howard go off like the Hulk facing down a bunch of puny army goons, this is the Raptors playoff series no one remembers and in which nothing much happened — just like The Incredible Hulk is the Marvel Cinematic Universe film that no one remembers! Bosh was great, Ed Norton is great, but other than that…

Story: Looking to follow up their impressive 2016 run, the Raptors re-jig their roster with Serge Ibaka and P.J. Tucker to help slow down LeBron James. Spoiler: It doesn’t work. At all. 5/10

Oscar montage moment: DeMar DeRozan’s vicious dunk to propel the Raptors past the Bucks in the first round. This was the first time the Raptors had ever won a series that didn’t require them to play the maximum number of games. The fact that the Raptors blew a 25-point lead immediately before this dunk hurts this score. 6/10

Best villain: James. This is the “spinning the basketball in Serge Ibaka’s face,” “drinking a beer on the sidelines,” “casually eviscerating the Raptors with fadeaways” version of James, the one that spawned a million “LeBronto” jokes. 10/10

Underrated supporting character: P.J. Tucker. For some reason, it takes Dwane Casey three games before he starts Tucker on James, which is weird because Tucker was the best defender the Raptors had and was on the team for exactly this matchup. Alas, it was too little too late. And what could Tucker really do anyway? 3/10

Story: The Raptors, led by sophomore sensation Vince Carter and veteran tough guy Charles Oakley, make their first-ever playoff appearance — against the Knicks, with whom they executed that trade to get Oakley. 9/10

Oscar montage moment: Trailing 84-83 with the ball, the Raptors have a chance to win Game 2 on the road — a critical moment in a best-of-five series. Vince Carter has been sensational, with 27-7-5 on just 13 shots, but on the final play, he draws the D — and perhaps waits a second too long, before passing to Dee Brown, who has to rush an open jumper that goes long. 2/10

Best villain: Plot twist! It’s gotta be Butch Carter, who inexplicably attempted to sue former Raptor/then-Knick Marcus Camby in the middle of the series, prompting a mini-mutiny amongst his own players! 8/10, for the sheer bizarre-ness of this scene.

Underrated supporting character: This is a tough one; everyone you’d expect to play well (Vince Carter, Tracy McGrady, Antonio Davis, Charles Oakley) did, while the guys you needed to step up (Muggsy Bogues, Dell Curry, Doug Christie, Dee Brown) did not. So we’ll give it to Kevin Willis, who averaged 13/9 off the bench. 4/10

Climax: The Raptors trail 82-80 with 25 seconds to go in their first ever home playoff game, needing a stop stay in the game. Alas, Larry Johnson banks in a 25-footer to seal the win, and starts preening to the crowd while making his ridiculous “LJ” sign. I used to have a Larry Johnson poster in my room, from his Charlotte days; had I still had it in 2000, I probably would have burned it. 4/10

Final score: 27/50. It was a 3-0 sweep, but the Raptors hung in tough against a vastly more experienced Knicks team, Carter (after Game 1) and McGrady were excellent, and the outcome gave Raptors fans hope that the franchise was on the upswing.

2000 movie to watch (or not): Mission: Impossible 2. Let’s see, we’re teaming up a hot young star (Dougray Scott) with a veteran (Tom Cruise); we’ve got a clearly talented but also possibly insane person directing things (John Woo); and like that eye-roll inducing LJ sign, we have Woo’s signature eye-roll inducing doves flying through the final battle. We also have Cruise’s horrible haircut, and Oakley’s ridiculous cornrows! In addition, this franchise’s best years would come in the 2010s.