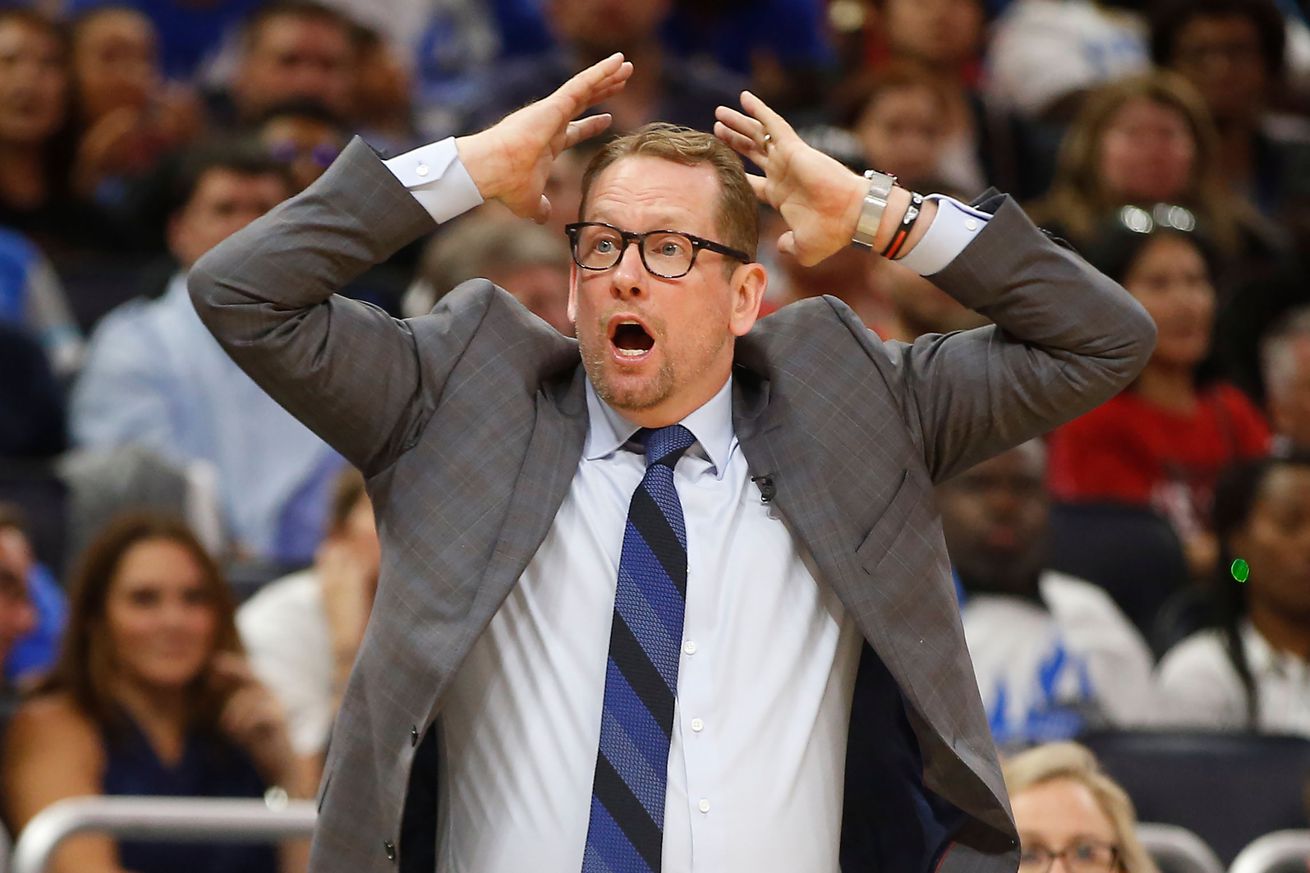 The Raptors’ rotations and three-point shooting were way off in Game 2, and it almost didn’t matter.

These Raptors do not lose very often. And they’re good enough that their losses are rarely rotten to the core. This column is dedicated to fleshing out the good bits, and quelling the hysteria that tough results tend to incite within this battered and beaten fan base. With this team and the superstar it happens to employ, more often than not, it’s probably gonna be fine.

We begin today with some words to live by, spilled by Nick Nurse after practice Tuesday morning.

“I think any time, but maybe especially last night when you’re going through it or watching it it feels like, really awful right? Like the offense is out of rhythm and everything’s awful and a lot of those shots don’t go in. And it’s usually not as awful when you look back and stuff. I think you’re always trying to balance your improvement areas and your execution and ball movement and spacing with you, you know, hey we did do some good things too. There’s always the good and there’s always the bad. And you wanna keep one of those and try to improve on the other one.”

Nurse is not a perfect coach, but he obviously reads What Didn’t Suck and takes its lessons to heart, so he’s got carte blanche to do whatever the hell he wants in my book. I, for one, look forward to 30 minutes of Malcolm Miller at the four.

On the real though, Nurse is definitely not wrong about the Game 2 loss. Yeah, the Raptors’ offense swam through molasses for two quarters to start the game, and it had one of those finishes that makes you wish lawn bowling was your sport of choice, but Toronto mized plenty of good stuff into the loss, too.

As has been the case with this Raptors team throughout the playoffs, any warm feelings stem from the defense. Loss or not on Monday, it remains a hateful gauntlet through which opposing scorers can only hope to navigate. Through seven post-season games in 2019, the Raptors have yielded more than a point per possession exactly one (1) time — all the way back in Game 1 against Orlando. Watching their defensive stands unfold, piled one on top of another, gets the sadist juices flowing just a little bit.

Nothing about the Raptors defensive performance through two games against the Sixers feels especially unsustainable. When they congeal, yeah, the Sixers have the makings of a scary offense. They did after all finish eighth in scoring efficiency this season. Toronto’s defense isn’t the mirage it was a year ago, though. In 2018, it’s top-five status was built on the corpses of crap teams. Elite offenses with mismatch-hunting artists surely didn’t need more than a few minutes in the film room to pinpoint DeMar DeRozan and Jonas Valanciunas as the team’s withered spine to be repeatedly thwacked with a baseball bat.

This year’s team doesn’t have those soft, doughy spots. It’s all washboard abs and fear, and it’s been smothering opponents, good and bad, for months now. Where the Sixers’ Game 2 coverage changes were borne out of the reality that they’ve always got a couple iffy defenders on the floor, Toronto is liability-free all the way through. Through eight quarters, Philly hasn’t really shown that they can crack the Raptors’ code.

Joel Embiid doesn’t look like JOEL EMBIID! so far. In 62 minutes of court time, he’s 7-of-25 from the floor, with six turnovers to seven assists — and that’s with the series-long game of chicken Nurse has been playing with his centres.

Embiid will surely have bigger games than his two showings in Toronto —it’s a must if the Sixers are going to have the sauce to win this thing — but it’s encouraging that his offense has been so suspect despite Nurse putting his head down and plowing through the noise and numbers as far as his big rotation is concerned.

Unlike some of the factors that did in the Raptors in Game 2, Nurse has agency over his to-this-point questionable sub patterns. If Embiid does look more spry after two days off, Toronto can counter by simply guarding him with the guy known for being really good at guarding him more often. If his inefficient ways persist, it’ll still probably be wise for Nurse to stop testing the limits of his current rotation set-up. Even with Embiid duffing post-ups and bricking threes, Toronto is still so much better off when Nurse overlaps Gasol’s minutes with Philly’s top guy.

Serge Ibaka has done as admirable a job as one could hope when stacked up against Embiid. But he’s over-matched, man. Gasol can absorb the punishment on his own; Ibaka needs help from his pals, which compromises the shape of Toronto’s defense. If Jimmy Butler’s going to have an itchy trigger finger on catch-and-shoot threes like he did in Game 2, the extra resources being sent to back up Ibaka will cause trouble out on the wings.

Nurse has been stubborn to bend the game plan that he’s settled on in the post-season. And on a certain level, it’s hard to argue with the results. Toronto’s 5-2 with the league’s second-best NET Rating in the playoffs.

Given a night to reflect on things, Nurse was asked on Tuesday about any changes to the rotation that may be on the horizon for Thursday’s game in Philadelphia.

“You’ve got to be happy with the last five games and how everybody has played and looked tied together,” said Nurse, parroting back the reasoning behind his rigidity.

“But I think a different series changes things, and the games within a series change things. They changed their rotation drastically last night from one game to the next. You gotta be flexible, and we should be.”

No coaching decision is as easy as the screeching internet hoards make it out to be. Managing a game is hard! But the solution to Nurse’s rotations does feel pretty simple, which inspires a little hope that he’ll move off his inclination to stick with the scripted program. Embiid isn’t playing gargantuan minutes totals. It should not be that disruptive to try to match Gasol with Embiid, minute for minute, while still giving Gasol a few extra minutes to toy with whichever bad centre Brett Brown uses as a backup in Game 3.

Angsty fans aren’t the only ones aware that this is the moment Nurse was hired to ably coach through. He knows the deal, too. That he acknowledged the need for some change on Tuesday was promising, and he’s done enough right to this point that he probably still deserves the benefit of whatever doubt you hold that he is in fact more adaptable than Dwane Casey was.

Where Nurse has less control over the flow of the game is in the shooting department. If Toronto is going to betray its character and shoot like crap, there isn’t a hell of a lot Nurse can do.

Fortunately for Toronto, the 10-of-37 bricklaying ceremony it hosted on Monday is not something they’re likely to repeat. Game 2 was the worst night the Raps have had from deep since January 31st against Milwaukee, meaning it was the worst shooting night of the Marc Gasol era.

Brett Brown’s been talking like he’s scared shitless of Toronto’s shooting since the weekend. If a Brown press conference doesn’t feature at least one mention of the Raptors’ post-deadline shooting resumé, the press conference did not officially happen. Toronto’s ability to can treys has hung over every decision Brown’s made in this series.

“I’d be lying if I told you I’m not aware that they have the best three-point shooting team in the NBA behind Kawhi,” said Brown before Game 2 when asked about the risks associated with double-teaming Toronto’s superstar. “So it’s not like as you scramble and rotate, ‘We got this right.’ You might not. Those types of those decisions, for me, are driven, at the end of the day, by the feel of the game, gut feel and, at some level, by math.”

Even with Brown’s defensive tweaks bearing plenty of fruit, the math still very nearly betrayed the Sixers on Monday. It’s not as though Brown’s match-up shuffling — Embiid on Siakam, Tobias Harris on Gasol, and Ben Simmons on Kawhi full time — kept Toronto from finding good looks. After the ghastly opening 20 or so minutes, Toronto overcame its initial shock and rediscovered the easy flow they tend to operate with. Gasol and Leonard two-man games became routine — as they should be going forward if Harris is going to be the one roped into screen-and-roll actions by Gasol — and the floor opened up. Leonard was defended well by Simmons, and still posted a 35-7-6 on 13-of-24 shooting. Philly still had to send extra bodies his way, and Toronto parlayed that into prime looks. They just missed the damn things.

Per NBA.com’s shot tracking data, 31 of the Raptors’ 37 three point tries were classified as open or wide open. Only nine of them dropped. This feels like some extreme Dwane Casey/make or miss rationalization, but it’s not like this team has Patrick Patterson taking its open threes. Danny Green doesn’t go 1-of-6 — not usually, anyway. You sleep well knowing Kawhi Leonard took 10 shots from outside. Had Philly funneled Toronto’s triples to undesirable spots, the Raps may be looking at a problem in need of more contemplation. But the Raptors don’t have undesirable spots, really. Nurse’s recourse for Game 3, shooting-wise, is as simple as telling guys to their make shots. And as Brett Brown will probably tell you again before Thursday’s Game 3, no team is currently better equipped to make that change.

All told, it’s remarkable the Raptors were even in a position to tie Game 2 in crunch time considering how wild and perplexing Nurse’s lineup choices were — please stop playing Jodie Meeks, guy — and how unseasonably cool they were on shots that are typically mini daggers to the torso of opponents. Based on the tilt of the floor in the closing minutes, it felt like if the game were 50 minutes long, the Raptors may well be up 2-0 and laughing having committed a robbery for which they were not caught.

Toronto doesn’t have to reinvent the wheel in Game 2. It still has the best player in the series, the more impervious defensive front, and a decided calculus advantage, even on average nights from downtown. It’s now on Nurse to keep the good and improve on the bad. A little friendly regression back to mean wouldn’t hurt either.