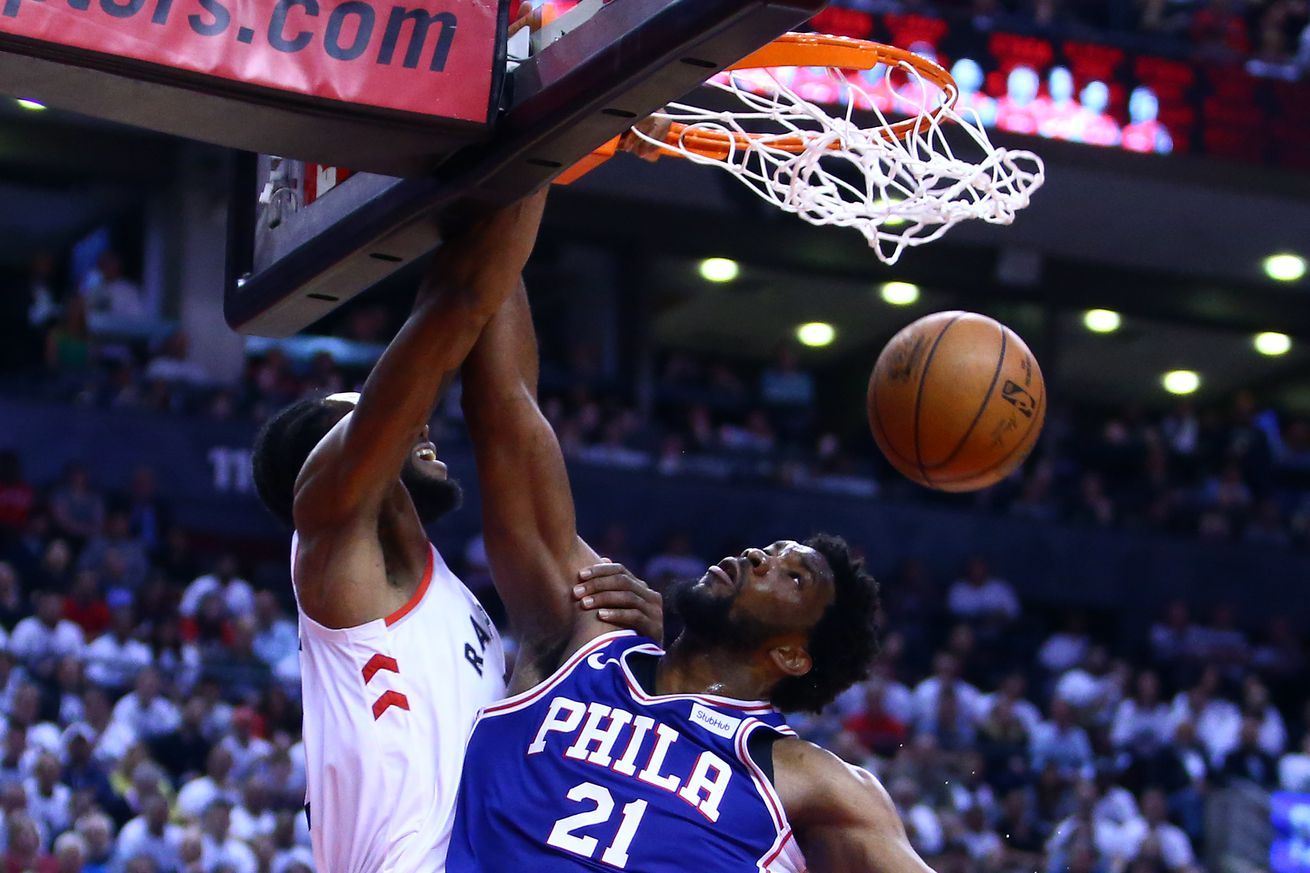 During the Raptors’ Game 5 dismantling of the Sixers, Kawhi Leonard threw down two soul-crushing dunks. Before tonight’s Game 6, we’re here to figure out which sent the better message to Philly.

Kawhi Leonard has spent a fortnight demolishing the Sixers in just about every conceivable way. Most of the time, it’s been done in his typically understated and brilliant way. You know what that entails — the slow motion probing of the mid-range, the hilarious efficiency and that thing where he is really good at defense. In Game 5, though, his punking of the Sixers was completed with a tad more thunder.

The two dunks Leonard crammed on Tuesday — one at the end of the second quarter, another to close the third — were as exhilarating as they were malicious. Never has the impartiality of press box-sitting bloggers been so challenged. On the first of the two, our beloved tyrannical boss man Daniel Reynolds had to hold onto my arm lest he fall out of his chair.

The dunks were, on their own, all the justification the Raptors will ever need for their load management game plan with Leonard. You keep him fresh and bouncy in the regular season so he explode and snatch lives with cruel intent in the spring.

In case you missed it and/or blacked out when the first one happened:

Two stunning, something-from-nothing jams, both in the important closing seconds of quarters. They were two dunks that left no question as to who owns this series. It’s Kawhi, and by a huge margin. The question that has not yet been answered, though, is a simple yet impossible one.

Which dunk was better?

Both Dunk 1 stans and Dunk 2 truthers have troves of debate ammunition. Each dunk, while similar in timing, execution and authority, have subtle qualities that make them worth arguing for as the superior cram. Both were great indignities brought upon the houses of the men who will forever adorn smartphone backgrounds. But who should be most ashamed in the aftermath? The reactions to each dunk — from the crowd, to the bench to those on the court — have their own specific charm. Did one collection of responses dwarf the other? Leonard shifted the mood of the game each time he elevated, but which one had a greater impact on the final outcome? All of these questions are worth asking, and deserving of answers. Let’s dive in.

Neither of Leonard’s two hell dunks happen without some very specific things that the Raptors do well as a team being present.

Dunk 1 is, start to finish, a team-wide achievement. A sturdy Pascal Siakam pick kick starts the sequence. Then into the frame creeps the savant Kyle Lowry, who parts the sea with a lane-clearing back screen on Philly’s best rim protector. Danny Green’s in the corner, providing precious space for the action to unfold. Marc Gasol, meanwhile, literally pushes Tobias Harris into the poster, presumably because he likes to make his teammates better, and a dunk over two dudes looks way cooler than a solo homicide. Dunk 1 was an allegory for the entirety of Toronto’s Game 5 performance — a triumph achieved through togetherness and cohesion, and example of the very best the Raptors have to offer.

Sometimes it’s cool for the Raptors to just let Kawhi eat, though. If his first-half exclamation point was emblematic of Game 5, Dunk 2 was the stand-in for rest of the series thus far. It was the lone wolf bringing down the moose, or at least the guy the Moose backs up.

Whether you come down on the side of Dunk 1 or Dunk 2 in this column of the rubric depends on what you deem most important to Toronto’ success in this series: Kawhi’s ability to get shit done on his own, or the team’s supporting cast playing up to standard.

It’s a very chicken or eggy question that gets to the root of the age-old dilemma teams face when it comes to handling opposing superstars. At what point is it worth it to allocate extra defensive resources to stopping one guy, and how much do the pieces around that guy scare you?

Pascal Siakam addressed the riddle facing the Sixers at the post-game podium.

“We knew tonight they were going to come out and try to double him,” said Siakam after the game. “So he was just reading the way they was playing on the defensive end and I think he made some great plays moving, passing the ball any time they got two on him. That’s how we had some great offence tonight.”

Ultimately, I come down on the side of Kawhi’s individual awesomeness being the root of most good things that befall the Raptors. Without his ability to turn conjure Dunk 2 out of nothing, the less the Sixers would feel compelled to send doubles his way. Straight up defense across the board leaves the Raptors’ secondary guys less likely to succeed, but leaving one guy to fend of Kawhi is death for a defense.

Toronto’s Game 5 offense doesn’t come so free and easy without Leonard laying down four historic performances deeming him worthy of extra attention in the series’ earlier contests. For what it represents about this year’s very different version of the Raptors, the point here goes to Dunk 2.

A pair of role players — one good, one James Ennis; or the Sixers’ mercurial, boastful, poisonously online star player — which of the two options makes for better poster fodder? Who erred more flagrantly along the road to getting yammed upon by Toronto’s Funnest Guy?

Honestly, I feel bad for Joel Embiid and his unenviable role in Dunk 2. This has been a rough series for Philly’s best and most likable player, and what sucks is that his misfortune seems like it’s mostly out of his control.

People get sick, man. When that happens, most normal people call into work and rest. Embiid is playing NBA basketball games, in which he’s stood as the last line of defense against both a top-three player on the planet, and a bottom-one backup centre rotation in the league. Kawhi dunking on him was akin to an older sibling pouring chicken soup on a cold-ridden little brother. It was mean. Kawhi should almost feel a little bad about it. It’s a damn shame Dunk 2 wasn’t on top of J.J. Redick’s smug, Ross Geller ass head as opposed to Embiid.

Dunk 1 on the other hand, was a wholesome and clean destruction of two able-bodied and doomed souls.

This is malice. Harris, thrust into the path of the oncoming train by Gasol, whose lust for blood here is more than a little troublesome; Ennis, the would-be shot-blocker having his forearm subsumed by the might of Leonard’s palms — neither should be permitted to attempt verticality again before 2023. Point to Dunk 1, it’s not even close.

If there’s one thing DeMar DeRozan had that Kawhi has lacked to this point, it’s a flare for catching bodies in the clutch. DeRozan reached his most bloodthirsty state in crunch time, as Rudy Gobert, Tristan Thompson and the entirety of the 2017 Bucks closing lineup will surely corroborate.

Leonard’s two Game 5 dunks came when the heat of the game sat at no more than a low simmer. While it can certainly be argued that the timing of each of them — the first to put Toronto up 21 before the half, the second to extend the lead to 22 heading into the fourth — was critical for snuffing out any lingering Sixers energy or momentum, who are we kidding? The Raps controlled the game long before and long after both flushes. The post-game reactions to Leonard’s two aerial efforts reflected their relatively small impact on the flow of the game.

“Obviously it’s always good to close out quarters and halves with some momentum, it’s why you try to control the two-for-one situations so you’re either going to make a bucket and not give them one at the end,” said Nick Nurse, sounding an awful lot like Leonard in the process.

Siakam was at least dazzled by Kawhi’s two instances of getting the hell up, but seemed flip-floppy on whether they had any real sway on the game.

“I think that was pretty impressive,” said Siakam. “Definitely, when there’s dunks and things like that, it definitely gives you energy. We came back from the half, and they went on a 7, 8 or something-0 run to start the second half, so I don’t know how much it helped us. But plays like that always give us energy, and even in the second half the dunk over there, it’s just an energy booster. Everyone kind of gets involved.”

Let’s call this a wash. And forever shouts to the king of clutch dunks, DeMar DeRozan.

Look, I don’t wanna say Dunk 1 is totally over-matched in this criteria. Personally, I was more stunned by Leonard emerging from the muck and soaring through Ennis and Harris than I was when he exacerbated Embiid’s already very bad day. And if we’re going strictly off the broadcast reactions, Ian Eagle only unleashed his famed “THAT’S A MAN’S JAM!” call for Leonard’s first thunder dunk. Ennis’ dismay, Embiid observing the act with incredulity and confusion in the wake of Lowry’s deft screening, Will Lou nearly fainting in the press box — the reactions to Dunk 1 were absolutely no slouch.

But thanks to the location (in front of the Raps’ bench), and the isolated embarrassment of its victim, Dunk 2’s responses were all-timers.

This is the best photo I’ve ever taken https://t.co/h9TUe1p8Sv

Kawhi Leonard with a little payback on Joel Embiid: pic.twitter.com/dnDhhHszgK

We are all Jeremy Lin and Pascal Siakam. ( @_kishanmistry) pic.twitter.com/egiXeqVKwU

Here we get a trademark guttural yell from Kawhi, Jeremy Lin looking as happy as he’s looked in a Raptors uniform, Danny Green’s jaw agape, and Embiid receiving more balls to the face than Kyle Lowry on How Hungry Are You? Each and every reaction here comes together to create a mural-worthy masterpiece.

Amazingly, the biggest loser of this dunk was not Embiid. Like we’ve covered, he was deathly ill and not entirely capable of defending himself against being dunked into dust. No, the one to feel bad for here is referee Eric Lewis, coerced into stoicism by his work clothes, unable to properly marvel at Kawhi’s most recent Jordan-esque display, the veins in his forehead pulsating with the energy he’s been forbidden to release. Save your Embiid pity, and direct it toward our impartial hero, Eric Lewis.

And the winner is…

By a score of 2.5 to 1.5, Dunk 2 is ruled to be the better dunk. But the real winners are the folks watching this Kawhi Leonard playoff run unfold, the Sixers and their soon-to-be despondent fans notwithstanding.