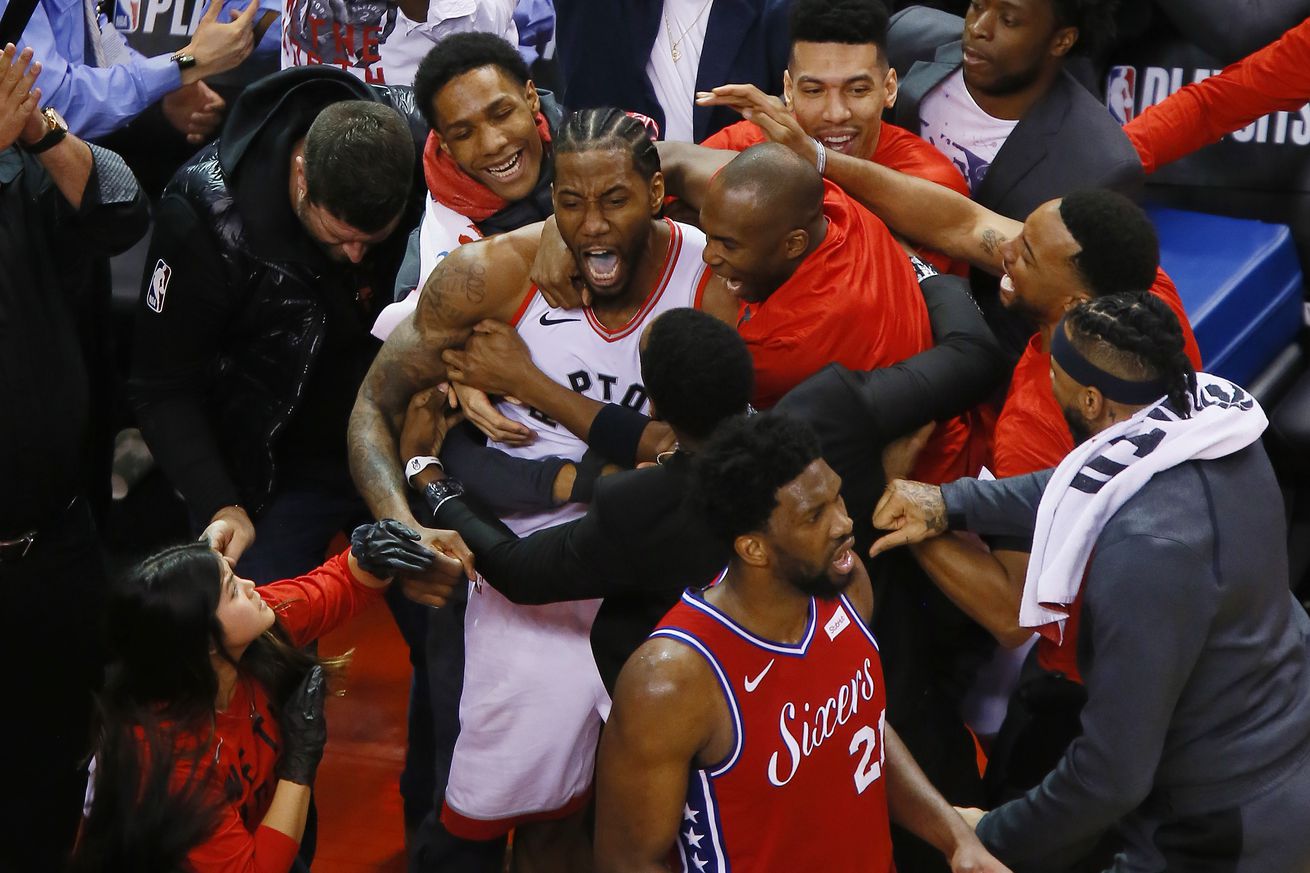 In a perfect turn of events, the Raptors won Game 7 against the Sixers on a last second shot by their best player, Kawhi Leonard. Literally unbelievable.

The Raptors only had to win. They didn’t have to win with grace, or aplomb, or anything approaching beauty. They just had to have more points than the Philadelphia 76ers after 48 minutes of Game 7 action; the whole team could then bundle up their collective performance as one more memory. Even if the Raptors decided to all shoot terribly, even if it looked at times like they would never hit another three, even when Philly took the lead — especially then — none of it mattered, if they could hold on until the end.

That Toronto’s Game 7 win would come on a buzzer-beating shot from Kawhi Leonard, a long two on the baseline that bounced and hung on the rim for what felt like a million years, was just perfect poetry. It was magic the universe seemed to draw up just for the Raptors and the city of Toronto. The other 47.999 minutes, all the ups and downs, the whys and whats and how-could-yous, all of it, just melted away.

The Raptors had a Game 7 in the second round against the Sixers, it came down to a buzzer-beating shot, and this time… it went in.

We have to somehow recap this game now, but to be honest, I’m not sure how to do it. Both the Raptors and the Sixers came out on Sunday night looking jumpy. The crowd was antsy too. Neither team could hit a shot for much of the first few minutes, the first quarter tally sat at 18-13 with the Raptors up despite shooting 21 percent from the field. Kawhi may have finished with 41 points, but he was firing, and firing, and firing all night to mixed effect. He shot (a mere) 16-of-39 from the field, which is wildly out of character for him — both in the number of total attempts and in their efficiency. But the Raptors needed it.

As a team, Toronto shot just 38 percent from the field, and 23 percent from three. Danny Green was quiet once again (1-of-3 from the field; zero threes). Fred VanVleet was a non-factor (0-for-5), playing mostly because Kyle Lowry had early foul trouble (and popped his thumb out and back in — again). Marc Gasol did a yeoman’s job on Joel Embiid, but he too was not finding it easy to hit shots (3-of-8 for seven, one made 3, and seven boards). Even the often electric Pascal Siakam looked stressed for most of it, going 4-of-11 with a few wild misses along the way for 11 points (plus 11 rebounds).

As the going got tough for Toronto, the Raptors three most seasoned players, Lowry, Serge Ibaka, and, of course, Kawhi, were the guys who carried the load. For Lowry it was the all-around play, as exemplified by an astounding third quarter run by the Raptors. In that frame, the Sixers looked like they were starting to take control, grinding out a seven point lead thanks to a 16-0 run. But then Lowry hit a driving lay-up, followed up a blocked VanVleet attempt by collecting the rebound and dishing it to Ibaka for the bucket, and then drew a customary charge. It didn’t put the Raptors in complete control, but it did remind them of who they were a little bit. Lowry would finish with 10-6-6 with a bad thumb.

Meanwhile in Ibaka, the Raptors had a guy willing to just play free and easy. Like night and day from his Game 6 performance, the Raptors big man took a pair of huge threes during his first run on the floor (to that point, the only 3s Toronto had made), and just kept going. Ibaka later hit another three on the move, while also playing huge on the glass — with four offensive boards — to finish his night with 17 points, eight rebounds, and three assists. Nick Nurse was hard-matching Gasol’s minutes with Embiid, but that didn’t mean Ibaka wasn’t a force defensively. He helped contain all of the Sixers quick forwards, and was active in the double-teams on the Sixers’ massive centre. When the Raptors were shutting down the Sixers for almost four minutes in the fourth — before Jimmy Butler’s late lay-up — Ibaka was out there like a menace.

There was a tweet from early on that summed up the mood heading into Game 7:

Given the up-and-down nature of the entire series, it felt distinctly possible that the Raptors could mess it up some way. They didn’t need to get blown out for things to be disappointing — they just had to do that frustrating Raptors thing where we all slowly lose our minds as the game gets away from them. As Game 7 carried on, and neither team could hit the knockout blow, it felt increasingly likely that the Raptors would find themselves in exactly the situation they were in. A lead squeezed away, a tie-game, a clock with only a few seconds left.

Of course, then the stars aligned and everyone in Toronto was flashed back to 2001 and that horrible moment when Vince Carter missed at the buzzer and we were thrown into the wilderness for over a decade. If that shot goes down, maybe everything is different. Maybe the team goes to the Finals, maybe we don’t have all those dark years in the 00s, maybe, maybe, maybe. We can wonder forever.

But then we wouldn’t be here celebrating this run. We wouldn’t have gotten the elation of the 2013-14 team, the highs of those in-season trades and the post-season runs that followed, and the wild and exhilarating play from Lowry and the rotating cast of characters who joined him along the way.

And of course we wouldn’t have gotten to see Kawhi Leonard, the robot, the machine, the man who never gives himself away, stepping into a final shot to put the game away — and hitting it. No matter what else happens in these playoffs — a loss to the Bucks, a humbling at the hands of the Warriors, who knows — we’ll always have that moment. Let me be clear: this is not a “we’re just happy to be here” sentiment. It’s not. It is instead a call out of that same wilderness from where we once were: why not the Raptors? Why not Toronto? Why not us?

Go ahead and watch the shot again…

And then tell me you’re not ready to believe in the Toronto Raptors.