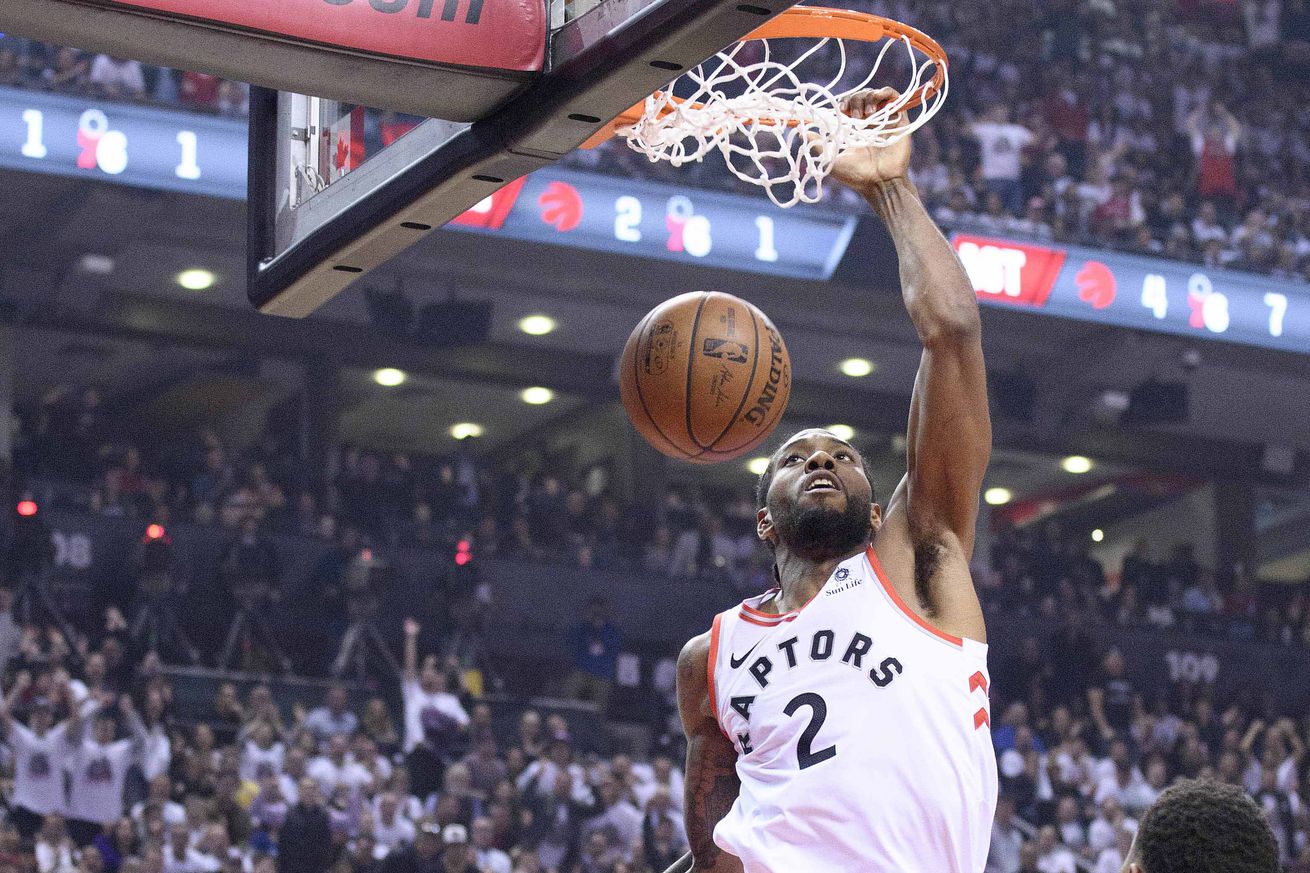 It was about as thorough a dismantling as we’ve seen all season from the Raptors — and it came without Kawhi Leonard going full superhero. The end result: an easy 125-89 Game 5 win and 3-2 series lead for Toronto.

The Raptors have often conspired with their playoff opponents to turn each series into what can charitably be described as a rock fight. Hard-scrabble play, messy execution, a lot of missed shots — Toronto has seen some ugly post-season basketball over the past few years. It’s what made this series with the Philadelphia 76ers so frustrating to watch after Game 1. We knew this iteration of the Raptors could be better.

In Game 5, we got the good version once again, and then some. After a seesaw first quarter, the Raptors began to assert themselves, blowing a close game wide open by outscoring the Sixers by 20 in the second (37-17), and never really looking back. The final score, 125-89 for Toronto, was both indicative of what these Raptors can do — and a huge sigh of relief. They managed to turn a rock fight into a game of rock-paper-scissors, guessing easily and correctly at every turn. “I was certainly not expecting that kind of game tonight,” said coach Nick Nurse. “Obviously, we’re certainly happy with the result.”

That result started with Kyle Lowry, who — despite some question as to how he affects the game for the Raptors — started this one with a furious must-win energy. There’s a feeling often with Lowry that this is how things work for him. If he gets those first few minutes off on the right foot, suddenly anything is possible. After an opening frame with eight points, Lowry finished Game 5 with a cool 19 points on 5-of-9 shooting, plus six rebounds and five assists in 34 minutes. He was also second on the team in plus/minus at +31.

Also in the good sign category: the minutes from Serge Ibaka and Fred VanVleet. For the former, despite a huge (accidental) crack to the head from Kawhi Leonard, the Raptors can-do forward injected some huge energy into the second quarter, and made some of his signature plays on offense. Ibaka finished with 10 points, but it felt like more than that. Likewise for the latter, VanVleet, who had just five points, but played with composure and changed the game on defense in a positive way, e.g. stopping Jimmy Butler in the post, and then stealing the ball from Joel Embiid.

Naturally, as these other good things were happening, the Raptors’ veteran starters, Danny Green and Marc Gasol, also made some huge plays. For his part, despite the requisite (and bizarre) hesitation, Gasol had 11 points (including three 3s) and continued to play strong defense down low. Meanwhile Green went nova as only he can, jumping out with 16 points on 5-of-7 shooting from deep. And just for fun, Green added three steals, which made up just a small part of the Raptors’ all-consuming defensive efforts on the night.

After jumping out to a first half lead that got as large as 21 points, the Sixers did claw back into it briefly in the third. It suggests at least in part that they remain a dangerous team. The lead shrunk to 13, and Jimmy Butler (22 points, seven assists, five rebounds) continued to probe for advantage. Those opening third quarter minutes also saw JJ Redick hit his sole three of the game, which could have been something of a turning point for Philly. Except Toronto turned it around almost immediately, going on a 18-7 run to crush the Sixers’ nascent confidence. For the game, Toronto managed to out-rebound Philly 42-37, no small feat, and coaxed them once again into 19 back-breaking turnovers. As coach Brett Brown implied afterwards — haunting was the word he used — there’s just no way to win that way.

And so now here’s the thing: Kawhi Leonard, the undisputed star of this series, had a pedestrian (for him) line of 21 points on 7-of-16 shooting (with zero made 3s), plus 13 rebounds, four assists, and two steals. In Games 2 or 4 (and even, to a certain extent, Game 1 too), this kind of line from Kawhi would have been the death knell for the Raptors. Tonight, thanks to the all-around supportive play of the team, Leonard’s merely human production didn’t matter as much. Beyond all the feel-good stories found elsewhere in this game, this may be the best one. The Raptors blew out the Sixers — at one point leading by as many as 40 points — without Leonard having to turn into a superhero.

But, of course, Kawhi also did this:

And this — please brace yourself:

And now the Raptors have a 3-2 series lead. We head back to Philadelphia for Game 6 on Thursday.