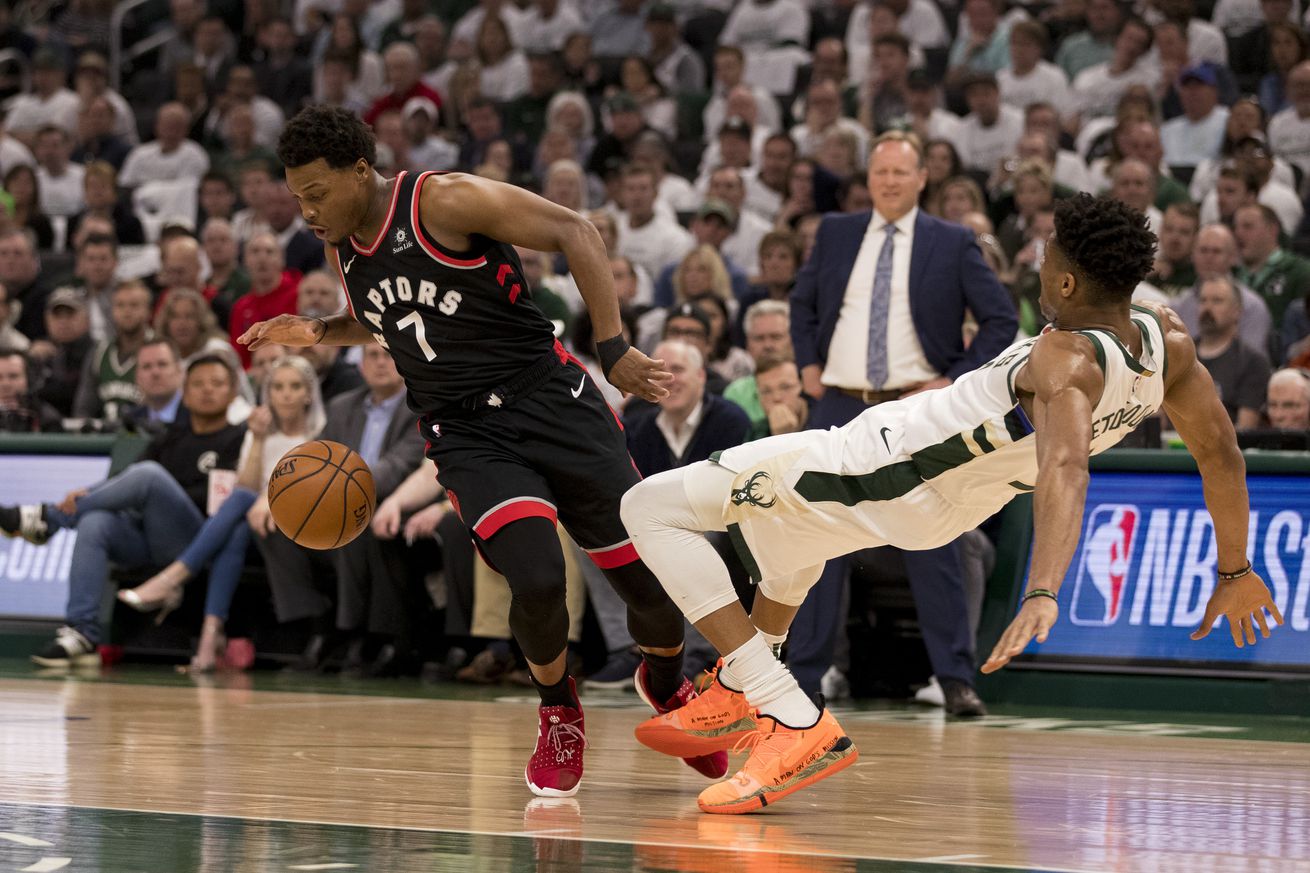 Despite the best efforts of Kyle Lowry in a singular performance, the Raptors faded against the Bucks and lost Game 1.

Thanks to bouncer buzzer-beaters, a superstar player, a core of veterans, and a tenacious defence, this Raptors team has shaken their share of tired narratives about the franchise. That includes Game 1 losses, where the team usually takes a collective poop to lose against inferior teams. This loss isn’t one of those, partially because the Bucks are damn good, but also because of something more frustrating than a decade-long narrative — it was a winnable game.

After leading from the opening minutes until the fourth quarter, the Raptors lost 32-17 in the final frame to drop Game 1 in Milwaukee, 108-100. In doing so, they squandered one of the singularly great Kyle Lowry post-season games.

Lowry wasn’t just doing his madcap, off the scoresheet stuff. (Don’t worry, he was doing that too.) He was also scoring the ball, making 7-of-9 from three to tie a playoff career high and finish with 30 points, eight rebounds, and two assists.

If this game had gone in the Raptors favour, it was the kind of tape you’d keep on your bookshelf to remind you of the Lowry years. He was confident with his jumper, but was also razor sharp on defence, understanding his rotations, and jumping passing lanes with regularity. He also had a bevy of outstanding passes in transition, ones that were only intermittently finished by his teammates.

Indeed, a lack of support was once again the story for the Raptors, in a post-season where it’s been a struggle to get more than three players contributing in each game. Kawhi Leonard scored his fair share, leading the team with 31, but needed 26 shots to get there and committed three turnovers. Pascal Siakam had 15, but was similarly inefficient going 6-for-20.

The rest of the team? Nobody else had more than six points. Danny Green was 1-for-5 with three turnovers, while the bench combination of Fred VanVleet, Norman Powell, and Serge Ibaka finished 5-for-16 after a promising first half stretch. Marc Gasol was mostly played out of the game in the second half thanks to the frantic pace, hitting on 2-of-11 in the game and getting beat on the glass by Brook Lopez; the big man led Milwaukee with 29 points, making four timely threes. The Bucks certainly looked fresher as a whole in the fourth quarter, as the Raptors rode their starters for the final eight minutes while Milwaukee took and held on to the lead.

Early on, though, the Raptors were making statements. Solid defence from the outset forced Giannis Antetokounmpo to score the first six points for Milwaukee. The Greek Freak would finish with 24 points on 7-for-16 shooting, as Toronto’s defence did a really good job of collapsing and making life difficult. After an 8-3 start, though, Milwaukee allowed Toronto’s shooting to give them the lead. Gasol and Green both hit threes to stretch a run to 16-0, as the Raptors would head into the second quarter up 34-23.

Some good bench minutes followed, as both of Norman Powell’s threes in the game kept the Raptors lead at 12. The Bucks started to play with more energy on the glass, though, as the game picked up pace and the home team cut the lead to five. The Raptors starters returned, with both teams looking intermittently solid and sloppy at the frenetic pace the Bucks favour. Two late Kawhi buckets and some free throws calmed things down, as the Raptors went into halftime up 59-51.

In the third, Eric Bledsoe scored seven straight to start the quarter to get the Bucks back in it, but Lowry really started to impose himself after that. A steal and score helped extend the lead back to ten, while 14 points from Kawhi in the quarter kept the Bucks at bay while everyone else on Toronto faded.

The beginning of the fourth was an omen of things to come, as Powell missed a layup, VanVleet missed a jumper, and Powell missed a three — Milwaukee scoring the other way to take their first lead since the opening minutes at 84-83. A Lowry three briefly gave the Raptors the lead back, but a 7-0 run put Milwaukee ahead for good. Besides one free throw from Pascal Siakam, only Lowry and Leonard scored for the Raptors in the fourth, with Gasol and Green missing three critical wide open shots in the final three minutes.

So, it feels like an opportunity lost for Toronto, as they’ll have, at most, three more chances to get a win in Milwaukee. Beyond the lack of support, the fact the Bucks shot just 11-for-44 from distance feels like a bit of an outlier — thought it might also be a sign of Milwaukee getting used to the Eastern Conference Final stage.

Regardless, how the Raptors bounce back in Game 2 on Friday will be key for how the rest of this series will go. Hopefully some other bodies can step up and support.