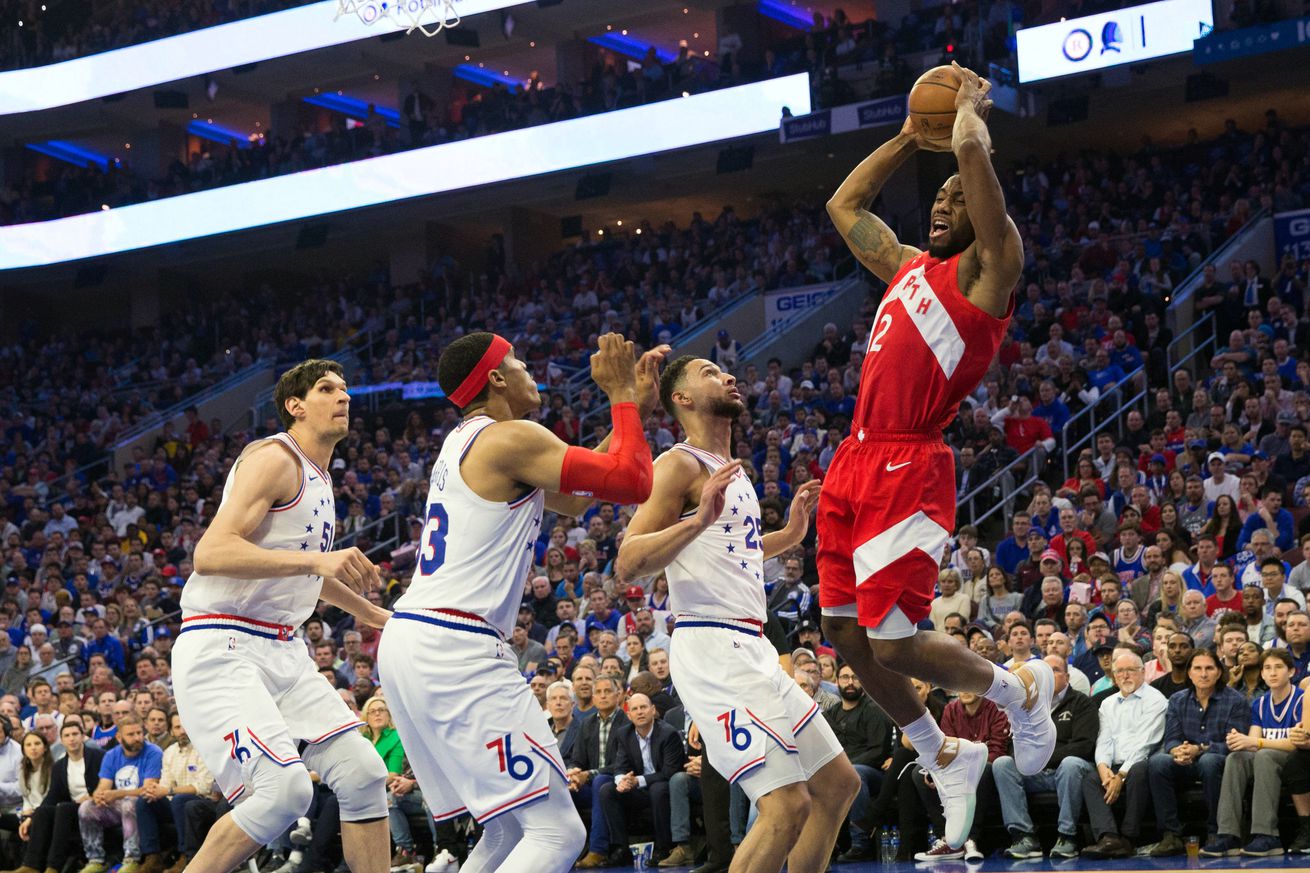 Toronto’s supporting cast withered while the Sixers finally got a good Ben Simmons game. This series will go seven.

The years are ticking off our collective life, but the Toronto Raptors still refuse to do things the easy way. After a Game 5 drubbing of the Sixers, it appeared the corner had finally been turned. The supporting cast had done their part, even during a mediocre Kawhi Leonard game. Happy surprises were happening everywhere — Siakam looks healthy again! Fred is making jumpers! Band-aid Serge over everything!

And yet… and yet.

The concept of momentum continues to be foreign in this second round series between the Raptors and Sixers, as very little of what happened in Game 5 carried over into Thursday’s Game 6 on Toronto’s side. Once again, the open shooting went cold, the rotations reverted back to problematic, and a hungry Philadelphia team capitalized. The Raptors had their runs, but ultimately fell well short — losing Game 6, 112-101. Game 7 is Sunday night in Toronto.

Statistically, the number bolded and highlighted on the scoresheet from tonight’s game is a bit off the wall: Joel Embiid posting a +40, the highest ever for a Raptors playoff opponent.

Despite a relatively quiet 17 points and 12 rebounds, the Raptors’ only success in Game 6 was done with Embiid on the bench. Nick Nurse decided to risk a few spot minutes with Serge Ibaka guarding the big Sixer, and while there wasn’t much direct scoring by Embiid done in that time, it was once again where their team broke the game open. If not for the 12 minutes where Embiid were on the bench, the score would be even more lop-sided.

The Sixers also got a welcome contribution from Ben Simmons, previously a no show in the series. Simmons had 21 points and eight boards, four of them on the offensive glass, as the Raptors struggled with transition defence and keeping both Simmons and Jimmy Butler out of the paint. Butler was superlative again, by the way, with a team-high 25 points on 18 shots.

For the Raptors, it was a disappointing regression back to early in the series. Kawhi Leonard got his 29 points, though relatively inefficiently on 20 shots (missing all four three-pointers). Pascal Siakam had 21 points and six rebounds — probably the best Raptor, as he shot 50% and played active on the glass. Kyle Lowry was… fine, scoring 13 points but failing to recapture his energetic Game 5 form.

The rest of the team? Out to lunch. Marc Gasol and Danny Green combined to go 5-for-16, as the Sixers dared both of them to make looks that fell in the regular season. Philadelphia has especially grown unconcerned with Gasol’s outside shooting, as the big man was 0-for-3 tonight, passing up at least two other wide open looks. Meanwhile, Serge Ibaka was the only player to score off the bench until garbage time — shooting 3-for-10. As a team, the Raptors missed open threes regularly, finishing 9-for-36 from distance.

The struggles were apparent from the opening tip. The Sixers started the game on a 13-5 run, catalyzed by two Danny Green turnovers. The usual early substitution for Joel Embiid yielded Boban Marjanovich, though, a substitution which allowed the Raptors to attack the paint and go on a 10-0 run of their own.

Leonard did the Michael Jordan trick of attacking the doubling big in the direction from which he came & having the big screen his own teammate. pic.twitter.com/fEVle6tXE4

When Embiid returned, though? Right back to Sixers momentum, as they’d go on a 10-0 run of their own to end the quarter up 29-21.

Early in the second quarter, Philly would continue to dominate as Kawhi took a breather, extending their lead to 17 with another 9-2 run. Toronto tried a large lineup again with Pascal Siakam at the three, but their inability to play transition defence off misses changed the outlook from Game 5. Toronto would claw back in the middle of the quarter, again with Embiid on the bench, but continued to get smoked in minutes with him on the floor. The Sixers would head to halftime up 58-43.

At the start of the third, the Sixers went on yet another run against the Raptors starters — this one a 9-0 spurt. The Raptors gained a foothold, though, as Philadelphia went to a small frontcourt with Mike Scott at centre, as a Kawhi dunk in traffic and a Danny Green three cut the lead to eight. Four points from Embiid and a Scott three bounced the lead right back up, however, as the Sixers would go into the fourth up 20.

The final quarter was more a test of audience patience than anything. Nick Nurse kept his starters in for nine minutes, seemingly daring Brett Brown to take Embiid out of the game. He did not, which might be a nice chess move given the big man wasn’t allowed to play a reduced minutes load despite the blowout. Fouls and various whistles extended play, but ultimately the game ended at 112-101.

Now, two days off for us to collect ourselves, with Game 7 going Sunday night. Since momentum has yet to show its face, it’s best to prepare for anything.