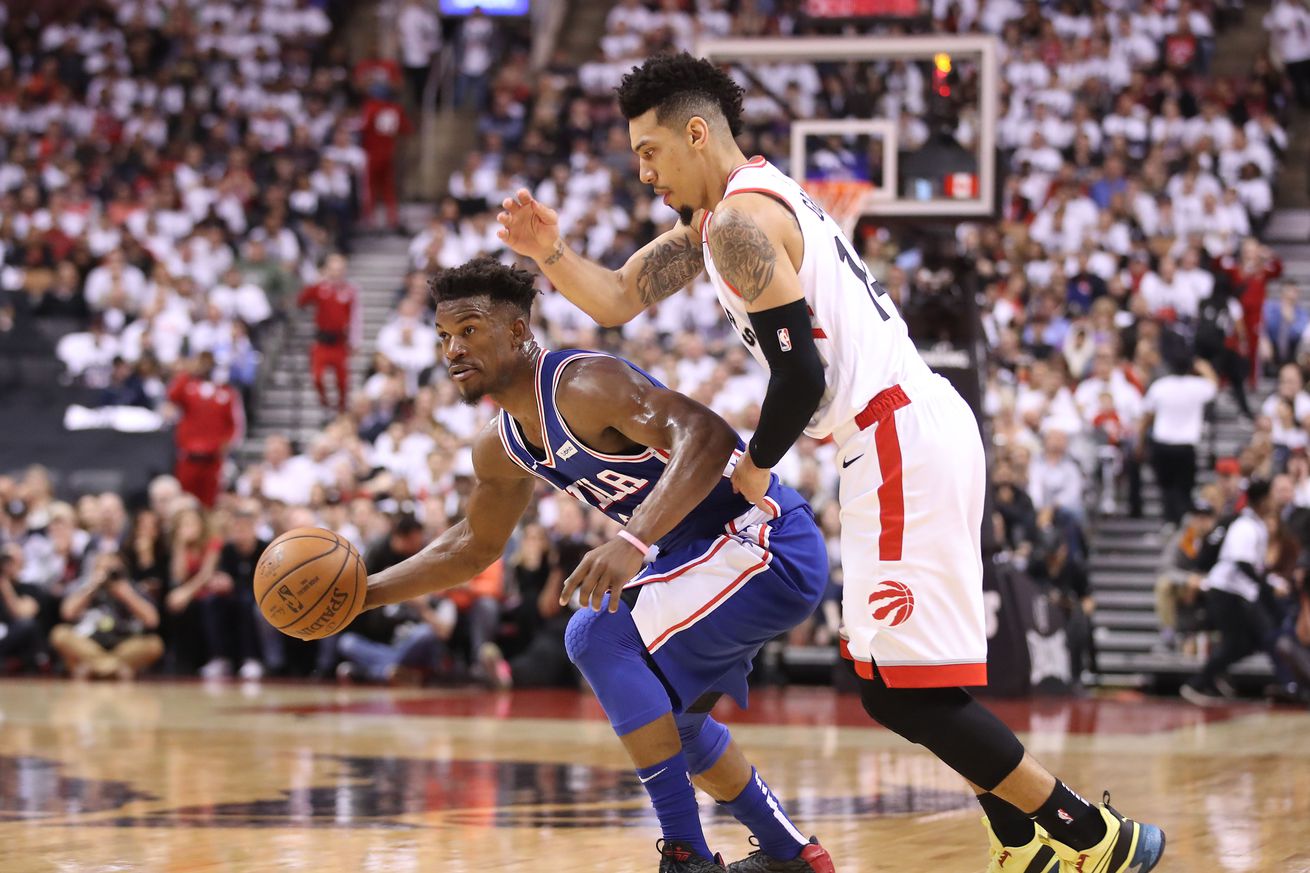 The Raptors nearly won Game 2 despite the 76ers best efforts. Can they answer on the road in Game 3?

The Raptors shot 36 percent from the field, made 10 of their 37 three-point attempts, turned the ball over nine times, lost the rebounding battle by 17, and lost Game 2 by a margin of — hold on, let me adjust my glasses — five points.

If you’re not feeling a modicum of optimism, even considering a home playoff loss, then you’re not looking hard enough. The 76ers did all the things they had to do in Monday’s Game 2 after having their butts handed to them in Game 1. They changed up a bunch of defensive matchups — Tobias Harris on Marc Gasol, Joel Embiid on Pascal Siakam, Ben Simmons on Kawhi Leonard — forcing those Raptors players out of their comfort zone (if only in the short-term) and Toronto into matchup hunting. After a devolution of their offence in the first half, though, the Raptors went back to their normal selves. They won the third quarter by seven and nearly stole the game at the last second, as a wide open game-tying Danny Green three was too strong.

So, yes, now the Raptors have to answer with adjustments of their own.

I don’t want to repeat every other Raptors article out there with the adjustments the Raptors should make, but again — be optimistic that everyone knows what those changes should be. Let’s explore how the Raptors can steal Game 3 on the road in Philadelphia, as we look at the three factors to watch for.

First, here are the game details.

Even though they’re 5-2 in the playoffs and earned those wins in succession, the one Raptors weakness has been a rigidity in rotation. Nick Nurse has stuck to his guns from the opening tap against Orlando, with only minor tweaks. The starters play 9-10 minutes to start the game, before a lineup with four bench players trickles in (with Jodie Meeks as the ninth man). The second quarter, late third and early fourth usually feature some combination of Fred VanVleet, Norman Powell, and Serge Ibaka on the floor — before the starters close the final 7-8 minutes.

In Game 2, the Raptors bench managed a paltry five points, but more concerning is that Toronto still isn’t doing the common sense thing and matching Joel Embiid’s minutes to Marc Gasol. A tether would definitely help the Raptors, who have gotten off pretty lucky through two games. Embiid is still dealing knee and back ailments, and had gastroenteritis in Game 2 — slowing him to a two field goal night.

The flip side of that coin also showed up in Game 2. Gasol is such a perfect matchup for Embiid, the two men being as big and burly as they are, but he’s less suited to Philadelphia’s bench bigs. Greg Monroe(!!) drove past him a couple times on his way to double digits in Game 2, a matchup that seems begging for Ibaka.

The 76ers are creative with their starter rotation out of necessity. Their bench guys are not great and Brett Brown has answered by ensuring that at least two starters are on the floor the entire game. By tethering Gasol to Embiid, Nurse can make a needed response without throwing his entire rotation out the window. It’s overdue.

Getting more into the weeds of rotations, the Popcorn Machine GameFlow from Game 2 — which illustrates runs in the game and who was on the floor for them — shows three stretches where the Raptors lost the game. One wasn’t avoidable, but two probably were.

That 14-4 Sixers run in the first quarter was the product of their own making. They bamboozled the Raptors with their switches, as the starters had one of their worst stretches of basketball since — as a fan kindly pointed out to me on Twitter — their Sunday matinee against the Magic weeks ago.

The 14-4 Sixers run in the second and the 8-3 / 7-2 run in the third and early fourth, though? Now we’re looking at where the bench rotation needs to be better. A backcourt of VanVleet and Powell works against many teams, but when the Sixers come in with James Ennis — with Ben Simmons and Jimmy Butler already out there — the frightening size and length simply removes a lot of the offensive tendencies of those two. Being undersized is okay, but without the confidence and craftiness of Kyle Lowry, the offensive creation of the entire team is stunted when their guards are non-threats on the floor.

This gets to a bigger shift that Nurse might consider, but ultimately might be too out of left field to actually happen: staggering Lowry so we can avoid any lineup with VanVleet and Powell together — or just move them down to the two and three spots instead of one and two. At this point, the two role players are best functioned as spot-up shooters, and the Raptors desperately need some creation in their bench lineups.

This can also happen by Danny Green and Marc Gasol playing more minutes. Thirty-two and 35, respectively, feels just shy of what it should be. If the Raptors want to steal one on the road, their starters may need to surpass the 38-minute mark across the board.

Kawhi vs. The World

It’s magical to have a player on your basketball team who you can count on to be great every night. That’s what the Raptors have had in Kawhi Leonard during this playoff run, who was once again excellent in Game 2 — scoring 35 points on 24 shots, while adding seven rebounds and six assists.

It’s clear what the 76ers want to do with Kawhi with their new defensive schemes. By crowding him in the middle of the floor, they want him to become a decision-maker — forcing a pass and then other players to make a basket. With the starters, the Raptors have answered the bell, and Kawhi has still been able to get his.

My point here? Let the good times roll. Kawhi’s ability to pass should only get better the longer he sees this Philadelphia team. There’s a reason many picked him as the best player in the series, and we can feel safe that his A-game will travel down the coast for tonight and Sunday afternoon’s Game 4.