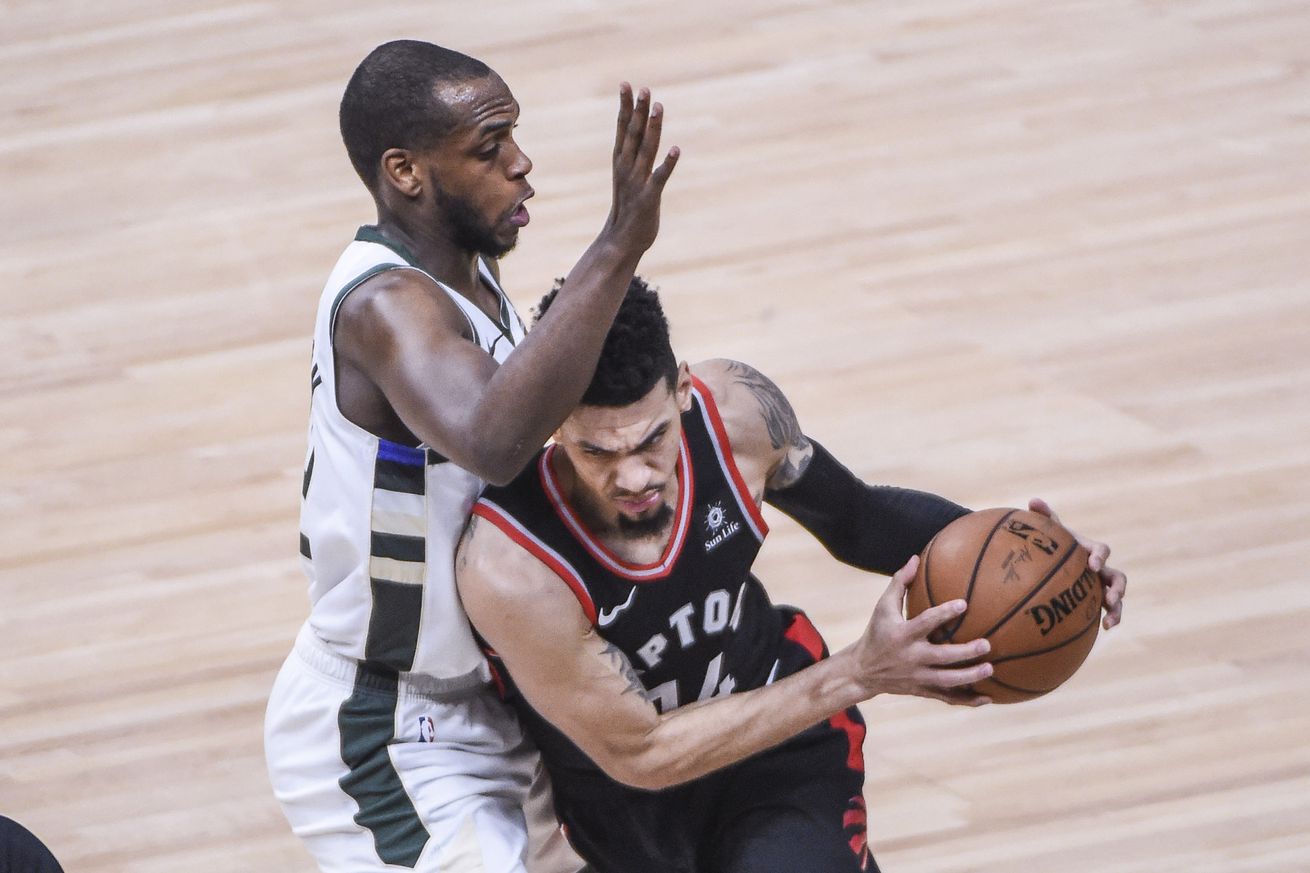 It’ll take a team effort, as the Raptors prepare for another chance to steal home court from the Bucks in Game 2.

It’s true, the Raptors missed a dynamite shot at stealing home court in Wednesday’s Game 1 loss to the Bucks. Plenty went their way in the first half: Milwaukee missed open shots, the Raptors drilled theirs, and Kawhi Leonard looked dominant.

Unfortunately, all things faded — save for Kyle Lowry, who made seven threes and was fantastic — as the Bucks won the fourth quarter 32-17 and hung on to win 108-100. Did the Raptors miss their best opportunity to win a needed road game? Maybe, maybe not. At the least, we saw a team that was able to dictate pace in the first half, make life difficult for Giannis Antetokounmpo on defence, and silence a raucous Milwaukee crowd that was befitting an Eastern Conference Final.

My knee jerk reaction was to say that the Raptors squandered the best Kyle Lowry they’re going to get in Game 1. That may not be true, though — just as Brook Lopez scoring 29 points might be an outlier, Kyle Lowry scoring 30 is never out of the realm of possibility. Those are both wells that can be tapped and untapped.

As always, the early games in a series are a progression of corrections, both for the winning and losing teams. The Raptors have more they can do, beyond just making the shots available to them. There’s more basketball to be played. We’re in for more surprises.

Here are the Game 2 details.

As simplistic as it sounds, it’s impossible to set up Game 2 without hammering home the need for Raptors role players to make open shots. As Daniel Hackett pointed out in his Game 1 analysis, Raptors not named Kyle Lowry, Kawhi Leonard, and Norman Powell were 12-for-46 from the field and 5-for-24 from three in Game 1. In the fourth quarter, a Pascal Siakam free throw was the only point not scored by Leonard or Lowry. Danny Green (1-for-5) and Marc Gasol (2-for-11) both missed critical shots in the last three minutes, with Green’s attempt to dribble past Khris Middleton ending up as a key turnover.

It’s foolhardy to expect that the Raptors are going to dig deeper into their bench for major minutes, so it simply falls on Green, Gasol, Fred VanVleet, and Norman Powell to shoot respectable percentages from the field. Powell did his part in Game 1, hitting two big shots to start the second half, but the others were off the mark.

The Raptors’ shooting struggles are also problematic when you consider the Bucks were 11-for-44 on triples in Game 1. There’s more they could’ve done in that area, especially considering some horrific three-point misses by Nikola Mirotic (1-for-6) and Middleton (1-for-6).

On the other hand, those shots are ones the Raptors defence are mostly fine with giving up, because it means Giannis isn’t dunking on guys’ heads. They can’t expect, however, that Milwaukee is going to shoot 25% for the series. Outside shooting will have to normalize on both sides of the floor.

After playing a slower brand of basketball against the Magic and Sixers, the Raptors slipped into the frenetic style favoured by Milwaukee in the second half on Wednesday. After an average pace of 95.70 vs. Orlando and 95.50 vs. Philadelphia, the Raptors played at 101.50 in Game 1, per NBA.com. Towards the end of the game, that pace clearly played a role in the fatigue the Raptors were up against.

I also thought Jacob Mack made a great point after the game, that Kawhi Leonard and Pascal Siakam both seemed eager to attack the paint against the Bucks without an imposing presence like Joel Embiid back there. They both struggled at the rim, though, as Milwaukee’s collapsing paint presence affected their ability to finish.

kyle good. pascal and kawhi need to better understand what’s gonna happen when they put their head down and try to drive against the bucks defence. everyone else should try not shitting their pants.

Leonard’s shot chart shows a 5-for-10 night at the rim and 3-for-9 around the painted area.

Siakam was similarly poor, finishing 3-for-8 at the rim.

There are plenty of factors at work here, but it all hammers home that as the Raptors’ dominance faded in Game 1, it was due to missed shots and playing Milwaukee’s style of play. The Bucks are a sneaky great team at protecting the rim, despite the lack of a traditional shot blocker. Making outside shots would help extend the Bucks’ defence, but it’s also on Leonard and Siakam to avoid head down drives and take advantage of the midrange more often.

Without OG and a go-to ninth man, it’s hard for Nick Nurse to find rest for his starting five. With only a day off between Games 1 and 2, though, a win for the Raptors may come down to buying 2-3 more minutes for Kyle Lowry, Kawhi Leonard, Pascal Siakam, and Marc Gasol.

The first option is to give more of a leash to Serge Ibaka, who played poorly in Game 1. The Bucks, more than any other opponent the Raptors have played thus far, seem willing to give up open threes to Ibaka. Utilizing him in the pick and roll with Kyle Lowry would be great to see, though, considering it was a bread and butter part of the Raptors offence before Gasol joined at the deadline.

Also, while a backcourt of Powell and VanVleet have struggled while on the floor together, it might be necessary to give Powell more than the 10 minutes he played in Game 1.

It also goes back to pace. 42 minutes at a fever pitch is going to affect Kawhi more than a deliberate brand of basketball. At the end of the third quarter, he settled into drawing fouls and taking time off the shot clock. It took the Bucks’ crowd out of the game and catalyzed the Raptors. It might not be as exciting, but more deliberate offence from Toronto might be needed to buy in-game rest for their star players.