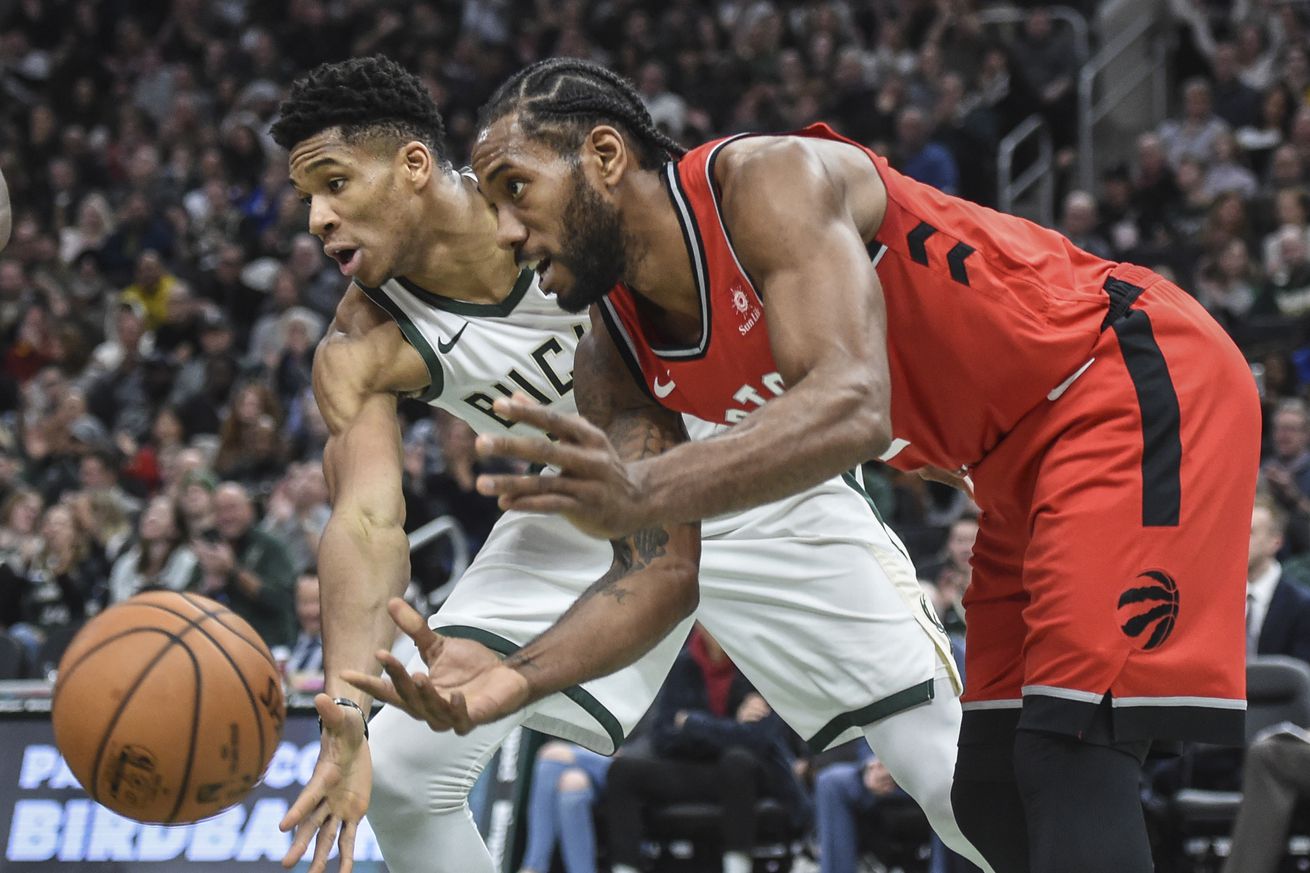 We look at three storylines heading into the Eastern Conference Finals, with a superstar matchup to die for leading the bill.

It still feels like a fever dream. Kawhi Leonard — and by proxy, the Toronto Raptors — are now a part of NBA history after one of the biggest shots in playoff history. This, after all the years of heartbreak and LeBron destruction and Primo pasta commercials; it feels like a payoff that deserves some breathing room.

I, for one, spent the better part of Monday — my first day of vacation — camped out in sweatpants watching remix videos (the Father Stretch My Hands mashup is top notch), taking in fan reactions, reading articles, and listening to podcasts. It’s a moment worth marinating in, even if it’s just for a couple days.

After all, there’s still basketball to be played. Play the music!

The payoff for the biggest win in franchise history is an Eastern Conference Finals date with the Milwaukee Bucks. It’s not LeBron, so there’s probably more hope coming into this series than there was back in 2016 — the only other time the Raptors have made it this deep in the post-season. There is Giannis Antetokounmpo, though, along with the best team in the NBA by record, and one that’s 8-1 in the playoffs (albeit against the barely alive Pistons and crumbling Celtics).

It’s a matchup deserving of the conference finals between two teams that spent a calendar year building their armoury in the wake of LeBron’s exit west. The superstar billing of Giannis and Kawhi is worth salivating over. It’s also a series that threatens to be more wide open than the two series preceding for the Raptors. More guards, more shooting, more opportunities to see some games in the triple digits.

With exuberance turning into anticipation (that’s what we’re all feeling on this lovely Tuesday, right?), let’s look at the three storylines I’m watching for as the Bucks meet the Raptors in the Eastern Conference Finals.

Giannis Antetokounmpo and Kawhi Leonard will be the focal points of this series, though much of their time on the court will not be against each other.

Let’s start with Giannis, who was primarily guarded by Pascal Siakam during the regular season. This was far from a Gasol vs. Embiid type resume for Siakam, but NBA.com’s player points differential metric shows the Greek Freak with a modest, yet positive 5.0 in 93 tracked possessions, as he shot 55.0% from the field.

Here’s a few sample possessions of Siakam on Antetokounmpo, where the scouting report is acknowledged — play off in the half court, present verticality at the rim. Pascal does well, but there’s very little chance of stopping Giannis in transition.

While Siakam is able, the numbers get eye-popping when you look at the possessions when Kawhi was the primary defender on Antetokounmpo. In 31 tracked possessions over three games, Giannis scored just four points and took just three shots(!!) — marking a -26.2 player points differential.

This clearly shows a deterrence factor when Leonard guards Giannis. It’s not a look we’ll see often, but much like Jimmy Butler in the last series, it is likely a late-game adjustment that the Raptors will go to in close games. The fact that the other matchups are so fluid between these two teams might allow even further opportunities for Kawhi on Giannis. It’ll mostly defend on fatigue and Leonard’s load on offence.

On that end of the floor, the vast majority of Leonard’s minutes against Milwaukee this season saw him guarded by Khris Middleton. Matchup data isn’t as helpful here, since there’s no real alternative in the Bucks lineup — Mike Budenholzer seems extremely comfortable with Middleton, as the next-closest matchup for Kawhi in terms of possessions was Malcolm Brogdon with 25. Giannis guarded Kawhi on just 12 possessions this season, not nearly enough sample size to learn from.

At this point, it’s hard to expect the Bucks being comfortable with a one-on-one approach with Leonard anyway. The regular season playbook has been mostly thrown out by Raptors opponents, who have turned to collapsing on Leonard and forcing others to make shots. It’s a simple expectation in this regard — Kawhi will need to perform in tight space, and open shots will have to go down for Danny Green and… these two guys.

The Importance of Fred and Norm

Game 7 against Philadelphia was absolutely an “empty the clip” game for the Raptors. Toronto played a rotation of seven, relying heavily on their supersized frontcourt with Pascal Siakam at the three next to Serge Ibaka and Marc Gasol.

Against the Bucks and Giannis, that frontcourt is no longer as viable, meaning the pressure shifts back to the players at the end of the rotation — Fred VanVleet and Norman Powell — to play positive or even neutral minutes.

Since it’s instructive in predicting how these two will play, let’s look at the likely depth charts for each team:

On first glance, the difference between the Bucks and Sixers is size. A smaller opponent will likely benefit VanVleet most. He was a horrific minus in the three Sixers matchups he saw most, a -13.1 against J.J. Redick, -14.6 against James Ennis, and -16.0 against Ben Simmons according to player points differential. He also shot just 12.5% on 3.4 shot attempts per game in the series. Not great!

Against Milwaukee and backcourt players like Eric Bledsoe and George Hill, VanVleet will still be in tough — but he’s already succeeded against the smaller Bucks, well above his season averages at 16.7 points on a 51.5/63.2 split in three games against Milwaukee in the regular season.

The same issue existed for Norman Powell against the Sixers, though not to the same extreme. Powell shot a solid split of 42.1/50.0, but was seldom used because Kyle Lowry was better at quick trigger decisions on defence. It’s on the other side of the floor, but again Powell should fare better with a bevy of matchups against players at his position.

In general, we’ll see more bench guards in this series. The Raptors won’t be able to play Ibaka and Gasol together without running into one of them guarding Giannis, with Milwaukee always holding the Giannis-at-centre lineup as a trump card — one that might force Gasol to the bench. That’s why I think one of Patrick McCaw, Jodie Meeks, or (gasp) Malcolm Miller will be a rotation piece in this series. My hope is it’s McCaw, since he’s been the most consistent.

Given how much Kawhi has had to do to get the Raptors to this point, it’s hard (but not impossible) to see him going another two weeks at this pace. Toronto was able to beat Philadelphia mostly with 3-4 serviceable players per game. It’ll take more than that to beat Milwaukee, who have averaged 38.1 bench points per game to Toronto’s 16.9 in the playoffs, mostly with Brogdon out due to injury. Early signs are good, especially with a better matchup in size and a better ability to dictate style. Which brings us to…

For anyone who’s watched Milwaukee’s first two rounds (I forgive you if you didn’t), it should be no surprise that they’re leading the playoffs with 20.6 fast break points per game and a 103.28 pace. The Raptors? Well, they’ve been opportunistic in transition — 8.3 steals per game have helped here — but are playing purposeful offence otherwise, doing so at a playoff-slowest pace of 95.58.

Obviously, we have a contrast in styles here, and pace is even more a factor when you consider the series the Raptors are coming off of. A physically demanding, emotional series against the Sixers where the rotation was whittled from nine to seven over the course of seven games must’ve taken some toll. There has to be an emphasis on controlling pace and slowing the Bucks down. Part of this is making shots (see point two above).

Why slow the pace? Well, the Raptors’ half court defence has been phenomenal. The Raptors have a defensive rating of 100.3, second to the Bucks in the playoffs (thanks Detroit), and are the best remaining team at both opponent points off turnovers (14.2) and points in the paint (37.3).

For an example of this, look no further than the last three meaningful Philadelphia possessions in Game 7. This wasn’t the Sixers failing to run offence, it was the Raptors blowing up primary action. On this possession, you get it all in 24 seconds. Kyle Lowry chasing Redick out of a shot, Serge Ibaka recovering onto Joel Embiid, Marc Gasol owning the paint, Kawhi Leonard deflecting a pass to Jimmy Butler in the corner, then closing space. The communication and recovery by this Raptors team, when engaged, is frighteningly good.

Toronto has shown an innate ability to slow down primary action against both Orlando and Philadelphia. This means their opponents are forced into an area of discomfort: Jonathan Isaac taking corner threes, Joel Embiid creating from the three-point line, even Greg Monroe popping a corner jimmy.

They have the tools to do the same against the Bucks. If the Raptors can slow the pace, make shots to limit run-out opportunities, stymie extended Milwaukee scoring runs, and keep a game close — well, we’ve seen what Kawhi Leonard can do then.

I’ll admit, it’s harder to pick the Raptors in this series than the two preceding it. Considering the emotion of that Sixers series, the minutes load of the top four guys, and the Bucks’ ability to swallow a basketball game with a run of shots — I have a suspicion that fatigue will be a factor. It’s going to be tough and there’s no question that the Raptors need other guys to step up.

I still believe that Toronto has the best player in the series in Kawhi, though, and have more hope of seeing their depth players return to form against the Bucks. The 1,600 words above this have been written with my brain, but this being a Raptors site… I’ll go with my heart.

Statistics from NBA.com and Basketball-Reference.