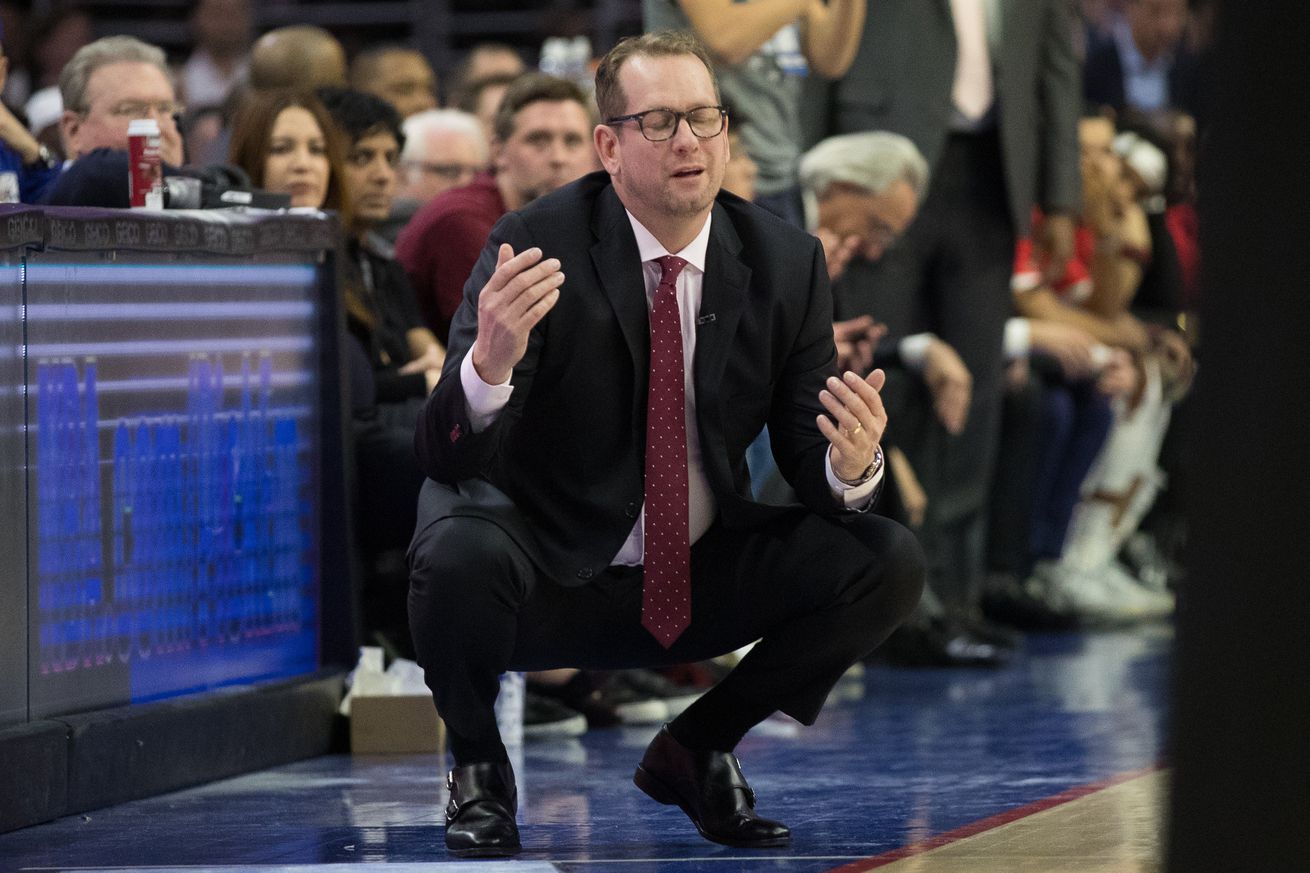 It’s almost time for Game 7, the winner-take-all contest for the Raptors and Sixers, part of a series that could be decided by which team gets hot from the perimeter. How will the Sixers and Raptors adjust?

Brett Brown and the Philadelphia 76ers forced a Game 7, and now we are down to a winner-take-all game on Sunday for the Raptors in Toronto.

After Raps coach Nick Nurse made some questionable decisions in Game 6, Sixers coach Brett Brown rode his team hard, coasting on Embiid’s airplane for as long as it can fly. Unfortunately for Toronto, the gamble paid off. And this time it was the Sixers’ supporting cast that showed up, while the Raptors’ supporting cast shrivelled.

With both teams at the crossroads and their future hanging in the balance on the outcome, the stakes are definitely bigger. Both coaches should be feeling the pressure to use every adjustment and counter-adjustments available.

We have some ideas below, but whether either coach will use them is another question.

There are a lot of things that went the Sixers’ way in Game 6. But the win would not have happened had they did not come in hungry, assertive, and aggressive on both ends of the floor.

The Sixers also got excellent contributions from their bench — namely James Ennis and Mike Scott — and they need those guys to do the same again in Game 7.

Boban Marjanovic’s appearance wasn’t really productive, but it felt like it threw Nick Nurse’s rotation into a frenzy, as if Boban’s appearance alone made Nurse go back to their original minutes’ distribution that saw Serge Ibaka spending more “alone time” defending Joel Embiid.

That said, the Raptors’ early runs in Game 6 came immediately after Boban took the floor. Both teams appears to be trading 10-0 bursts due to the presence or absence of Boban and Embiid. When Brown eventually went away from Boban entirely in favour of smaller lineups with Mike Scott and Ben Simmons, Toronto was unable to mount any more comebacks.

Will We See This Again: Have to believe that Brown knows his best bet forward is Mike Scott, with Boban not sniffing the floor again.

Brett Brown went for the kill in the third period in Game 6, as he played Joel Embiid for almost 14 of the first 15 minutes of the second half to maintain the stranglehold of their lead. Embiid looked like he can handle the workload, and his presence enough was worth it.

Will We See This Again: It depends on whether Embiid is affected by another ailment or injury come Game 7.

Last game, I suggested ways to get Ben Simmons going. The Sixers needed to push the pace — whether it’s off a turnover, a miss, or even a made basket. With an assertive Simmons, he was able to force cross-matches, and was back to his old playmaking self.

Sixers should double-down on this strategy, as it will be harder to score in a half-court set on the road — especially for the non-shooter that is Simmons. Any easy transition points that Philly can get would help.

Will We See This Again: The Raptors have to be disciplined enough to get back in transition right away, as there’s no doubt that Ben Simmons will try to push the pace again.

For the past few games, I’ve been writing about how the Sixers offense went from an Embiid/Simmons offense to a more “give the ball to Jimmy to pick-and-roll or iso and hunt for kick opportunities.”

Jimmy Butler was effective with the ball on his hands, and Danny Green could barely do anything to slow him down.

Will We See This Again: I’ve been clamouring for Kawhi to switch on Butler on defense, but I still expect Danny Green to start on Butler.

Potential Adjustments for the Sixers

The Sixers should just lean back on what worked for them in Game 6 (see above), and see whether they can punch first and get an early stranglehold on the game. It’s worked for them in their blowout wins, so why not try once again in Toronto?

For the past two games, the Sixers’ gamble on concentrating on Kawhi yielded a split — in Game 5 Toronto couldn’t miss, in Game 6, that was all the Raps could do regularly. Now, the Sixers will be on the road, and the non-Kawhi players went off the last time this happened. If it happens again, what’s Brett Brown’s plan B?

Will We See This: Defensively, this will be the Sixers’ “all-in” move. If they can slow down Kawhi and the rest of the Raptors sputter, they have Game 7 in the bag.

The Sixers should expect Kyle Lowry to be more aggressive in Game 7, and Lowry is at his best if he can penetrate to either score for himself or break down the Sixers defense and find an open shooter.

If the Sixers can discourage Lowry from getting into the paint and make him settle for perimeter shots, this could be a win for them.

Will We See This: It’ll come down to whether Lowry activates his “bulldog” mentality, something that we haven’t seen consistently in the post-season. Watch the opening minutes closely.

As I pointed out above, Embiid looked fine playing heavy minutes in the second half of Game 6. On top of that, the Eastern Conference Finals don’t start until Wednesday, so if the Sixers need it and if Embiid can handle it, they should push his minutes to 40. The gravity that he attracts when he’s on the floor would make this move worth it.

Will We See This: If it’s a close game, and Embiid is halfway healthy, he’ll be on the floor.

Nurse was clearly upset during the game with his team’s effort, and he rode the starters hard late into a blowout game. For the first time this season, we’ve seen the garbage time unit play with a sense of urgency.

Rebounding has been a big swing factor in the series, as the Sixers are big, long, and athletic. Nurse countering this by going small is not going to win them the rebounding battle if the effort is not even there. This overarching issue reminds me of this scene:

However, Nurse is not without fault for the Game 6 loss. If anything, he owns a big share of the blame pie on why the Raptors failed to close out the Sixers.

Leave Ibaka on an Island

We’ve already had several games worth of data suggesting that Serge Ibaka can’t handle Embiid. Not by himself. The Raptors managed to slow Embiid down when he was matched primarily with Marc Gasol.

Nurse got spooked by Brown’s move — putting Boban Marjanovic in the game to spell Embiid in the first quarter — and Ibaka was left all by himself to fend off Embiid for the next few minutes.

It was a close game (Raptors were up 14-13) up until Embiid checked back in the first quarter. Embiid did not make any shots during that time while being guarded by Ibaka, but the Raptors defense was too focused on potentially helping out on Embiid, and the Sixers were able to get wide open perimeter shots.

During this period, the Raptors also yielded two offensive rebounds, and as Ibaka helped out to contest the drives to the basket, the interior defense got exposed. It was enough to grant the Sixers their rhythm and momentum. From there on, the Sixers kept the Raptors an arm’s length away.

Will We See This Again: Unless it’s garbage time, this should never, ever happen again. Nurse has to use Gasol to match Embiid’s minutes.

Playing the Starters Late in a Blowout

At first, I didn’t know what Nurse was trying to do here. I mean, it’s a 20+ point lead with 7-8 minutes, and with the momentum on the Sixers’ side, Nurse couldn’t be blamed for calling this a game and putting his bench players in.

What Nurse was actually doing was getting anyone else not-named Kawhi their rhythm back, make them feel good by seeing a few shots go in heading into Game 7. Gasol was as passive as Ben Simmons was in Game 6, and Danny Green could not see the bottom of the net. They ran quite a few possessions highlighting them to mixed results.

Brown was forced to put Embiid in, pushing him past 35 minutes, subjecting Embiid’s body to a game that extended past its normal duration. Maybe this is just me, but if anything Nurse was sending a message to Embiid and to the Sixers, trying to get into their head. Whether it would help or not, I guess we’ll see tonight.

Will We See This Again: There will be no learning lessons tonight. Play to win, and that’s it.

It never worked before, so why would it work now? The Raptors elected to play Fred VanVleet and Kyle Lowry together for stretches in Game 6, and Tobias Harris and the like just abused them in the paint and shot over them.

Kawhi Leonard at the power forward spot is also a terrible decision if he has to play with Ibaka, especially if Embiid is on the floor. Worse, Nurse doubled down by putting VanVleet and Lowry in there as well. (Not that he would have swung things entirely differently, but this is where Toronto misses OG Anunoby.)

Will We See This Again: God, I hope not.

Potential Adjustment for the Raptors

The Sixers are a rhythm team, and they’re much more dangerous when they are feeling good. The Raptors cannot let them get going, and have to avoid giving them easy buckets off second chance points or via transition.

Nurse’s post game interview after Game 6 was perplexing. For him to say “it was a weird, strange game of runs” make it sound like he was clueless as to how and why it happened. But he did say one thing that’s true in Game 6: Toronto did not play hard enough.

One more time: this one should be a no-brainer, and if Gasol needs a quick break, give him a one or two possession blow. There shouldn’t be any minute of Embiid on the floor without him.

Will We See This: This should be strategy 1-A for the Raptors.

When Nurse rolled out a Kawhi-Siakam-Gasol-Ibaka lineup to go with either Lowry or Fred VanVleet, some good things happened. If Danny Green is not hitting his shots, it might be worth rolling with this lineup again. Sure, it brings the game down to 90’s basketball pace, but it makes it harder for the Sixers to score — so there’s that.

Will We See This: If the alternative is seeing more combo Norman Powell and Fred VanVleet minutes, I’m really open to this big lineup.

Jimmy Butler took it to Green and picked apart the Raptors defense, playing his best game of the series in the process. Danny just cannot handle Butler if he’s this aggressive and physical. Nurse needs to put Kawhi on Jimmy more often, if not for the full game.

Will We See This: Hopefully sooner than later in the game.

Rumour has it that part of the reason why Simmons doesn’t drive to the basket aggressively enough is his fear of being sent to the foul line often. Simmons is a career 58 percent free throw shooter, which puts him in the zone of being a Hack-A player.

If Simmons starts wilding out, this is a competitive advantage for the Raptors. Again, it would make for ugly basketball, but Toronto is trying to win, not look pretty.

Will We See This: If the Raptors are in desperation mode, very likely.