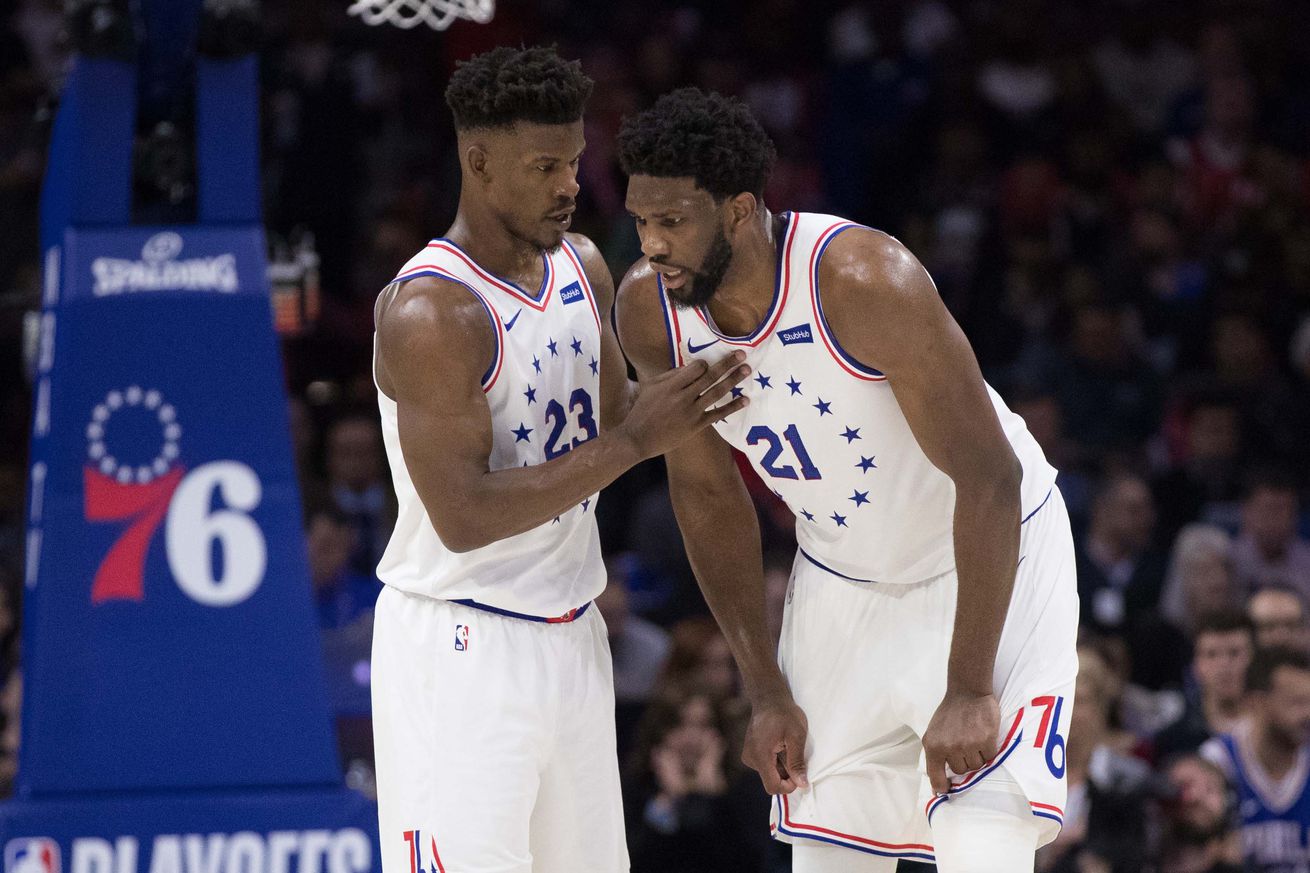 The second round of the 2019 NBA Playoffs is done. What steps should the Raptor’s closest competition take to get where Toronto (and Milwaukee) is now?

The East’s second round is over — in dramatic fashion! — and that means six of the best teams in the conference are sitting at home, wondering how to get where the Raptors and the Bucks are now.

So, how do they do it? I’m glad you asked. Since we’re sitting extremely fat and sassy right now in Toronto, below are my “so spicy, they could be Siakam” takes for every playoff team in the East. They range from everything between trading your seemingly sure-fire future Hall-of-Famer, to, well, not doing much of anything… yet.

I know. I know. But here’s the thing. The Pistons are in cap hell. They also have a real lack of talent on their team aside from Blake.

I’m not one of those people who believes that winning 45-50 games and getting a bunch of second round appearances is meaningless. But the Pistons don’t even have a path to that. They are as stuck as any team in the league. Moving Griffin could help change that.

The versatile power-forward just came off, arguably, the best year of his career. He’s learned how to adapt to his waning athleticism (perhaps the most “relative to a normal human being” thing I have ever typed), and become the Point-Forward Prince that was promised. Asking him to stay healthy for a full year is too much though. If ever there was a case for a Kawhi Leonard-style “Load Management” campaign, it’s with Blake. The thing is the Pistons don’t make the playoffs if Blake misses five games, let alone 15.

There are teams that have the depth to weather that sort of absence though. I don’t think Griffin has the talent to be the best player on a final’s worthy team, but I think the guy we saw last season could be your second best.

His contract is atrocious, but for a team who can’t land their star in free agency, Griffin should be a target.

Trading Andre Drummond or Reggie Jackson will require the Pistons to sacrifice additional assets. Waiting for Luke Kennard, or, snarf, Thon Maker to take a leap is being ridiculously optimistic. If Griffin has another serious injury the Pistons could be locked into another five years of wandering in the wilderness.

Dwane Casey has proven he can build a program, Pistons fans. Get Blake on a good team, feast on the karma that would generate. Get some assets, then tear it down to the studs. It’s the only way.

The Magic are an interesting young team. As the Raptors saw first hand, they’re long, versatile, and well-coached. They’re also lacking a true 1A sort of weapon.

Ross and “Vooch” won’t give you that — although if you wanted to say Vucevic could be a 1B when not matched up against an elite post defender like Gasol I’ll listen — but they are players with clear utility whose skills would make any true 1A-type better.

Still, Orlando can’t get crazy here. Paying Vucevic the max is a mistake. He hasn’t proven he can carry a team. Paying Ross like he’s a featured, rather than a complimentary, piece would be a double mistake.

At the right numbers though, Orlando should run it back, and then wait a year before any other big moves. In a season, Timofey Mozgov and D.J. Augustin, will be off the books. Evan Fournier will be an expiring deal and have more value. The Magic will have some inkling as to whether the Markelle Fultz deal was a steal, or just gave them Michael Carter-Williams on Quaaludes.

Then Orlando, with what should still be an intriguing collection of long athletes, can find their guy on offense. It may seem preposterous to think that the Magic could be a magnet for big name players — but warm weather, low taxes, and a past history of landing names (Grant Hill, Tracy McGrady), means the idea isn’t that crazy.

The Nets have regained some of their sheen. Or, more accurately, for the first time in the franchise’s long tri-state history, gained some.

They have some good young pieces in Caris LaVert, D’Angelo Russell (if they re-sign him), and Spencer Dinwiddie. They have a coach in Kenny Atkinson who knows how he wants to play. Brooklyn can leverage the mystique of the city, and the cool factor of their borough to get meetings.

Still, the Nets need to be comfortable with the idea that they may not land a superstar this time out. There are more teams with space, then available players. Kevin Durant in Brooklyn changes everything, Jimmy Butler, as good as he is, does not — especially when you consider age and injury history.

GM Sean Marks has proven to be a canny judge of talent, and a bold executive. His one weakness, however, has been tossing big offer sheets at players who aren’t stars (Tyler Johnson, Donatas Motiejunas, Allen Crabbe). He needs to be content to leave his powder dry and continue to develop from within, or risk capping out an interesting situation.

Brooklyn’s the type of market that can land the biggest fish, anything that isn’t should get tossed back into the water.

I don’t know if the trio of Victor Oladipo, Bojan Bogdanovicm and Miles Turner can ultimately compete with the best of the best, but I do know the Pacers should give it a chance and see.

The Pacers will have to re-up Bojan to do so, but with a raft of expiring contracts (Cory Joseph, Thaddeus Young, Tyreke Evans, Darren Collison), they have ample space to do so.

The Pacers could also be a dark-horse to add talent through a trade. Does Domantas Sabonis, Doug McDermott, Aaron Holiday and picks interest Detroit in a Griffin deal? What about Sabonis, a sign and traded Cory Joseph, T.J. Leaf and picks for Griffin and another salary? Is Oladipo, Griffin, Bogdanovic and Turner a versatile enough Big 4 to take on the money?

Indiana also needs to be careful that they don’t bring back too many of their own free agents at the sort of raises that will hamper their flexibility going forward. Still, they have a bunch of opportunities here, and the un-sexy move of locking in their top three players will allow them to be good enough to take risks.

The wannabe King is dead! All hail his bizzaro theories on the curvature of the Earth!

This take is not a “Kyrie is garbage” thing. He’s not. Irving is one of the best pure scorers in basketball, and being neutered by the best defensive team in basketball doesn’t change that fact.

What this take is is a doubling down on the opinion that Irving hasn’t learned as much about leadership as his talks with LeBron James make him want to believe. Without LeBron, Kyrie hasn’t been on a single team that has overachieved (even last year, the Celtics were only good in the regular season, and, you may have heard, he wasn’t around for much of the post-season dance).

The Celtics have big interest in Anthony Davis, but if Irving isn’t willing to commit to resigning, they can’t let themselves, or the rest of their roster, be caught in limbo waiting to know if they’re Davis trade-bait, or part of the future.

And even if Irving does want to commit, it’s a fair, and important, question to ask if Irving’s the sort of personality that can lead a team.

Boston has a great collection of young talent — probably. Their best bet is to hand the keys to the kids and see what they really are. A Tatum-led team isn’t winning a title — but it would make it very clear how far the Celtics are. Right now, they really have no idea.

I’d also support Boston taking a risk and going after Davis without Kyrie. They have so many assets that they can deal some very good ones and still have more talent, and avenues to acquire talent, to give Davis a truly championship worthy supporting cast.

That Ringer article isn’t just whistling Dixie, Ben Simmons really would be a devastating centre. He really could be Draymond Green on steroids. Now, of course, I would never trade Hakeem Olajuwon for Stanozolol-enhanced Green but…

There is the injury question to take into account. Big human beings tend not to last long in the NBA. The pounding on the body takes it’s toll, and that’s on someone who hasn’t had a litany of major injuries before they turned 26.

That also doesn’t take into account Embiid’s semi-legendary lack of concern for his health and conditioning. What if Embiid takes too long to figure out he needs to treat his body better? What if he does, and just keeps getting hurt?

Now imagine what the Sixers could get for Embiid. Say the Portland Trailblazers decide they need to “pull a Raptors” and swing for the fences. An offer of C.J. McCollum, promising big Zach Collins and a first round pick is awful tasty — especially with Butler and Harris back in the fold (which, would admittedly be tricky and depends on timing some of the NBA’s byzantine cap-rules).

The Sixers could dispense with a “pure” point guard with a roster of Butler, Harris, Simmons and McCollum. Whoever gets the rebound goes with it. If the fast break isn’t there, you run the pick and roll with Simmons, and those shooters, plus JJ Reddick, until the other team breaks.

It’s the Giannis playbook, and it could absolutely work in Philly.

Is it a huge risk to deal a Hall-of-Fame level talent when he’s still young. Absolutely. Thing is, it might be less of a risk to cash in the chips now, and use another, potential Hall-of-Fame talent to his fullest.

Toronto Raptors and Milwaukee Bucks: Not ready and no help from me, respectively

We’ll see what happens in the Eastern Conference Finals, in the summer, and beyond. What a season.