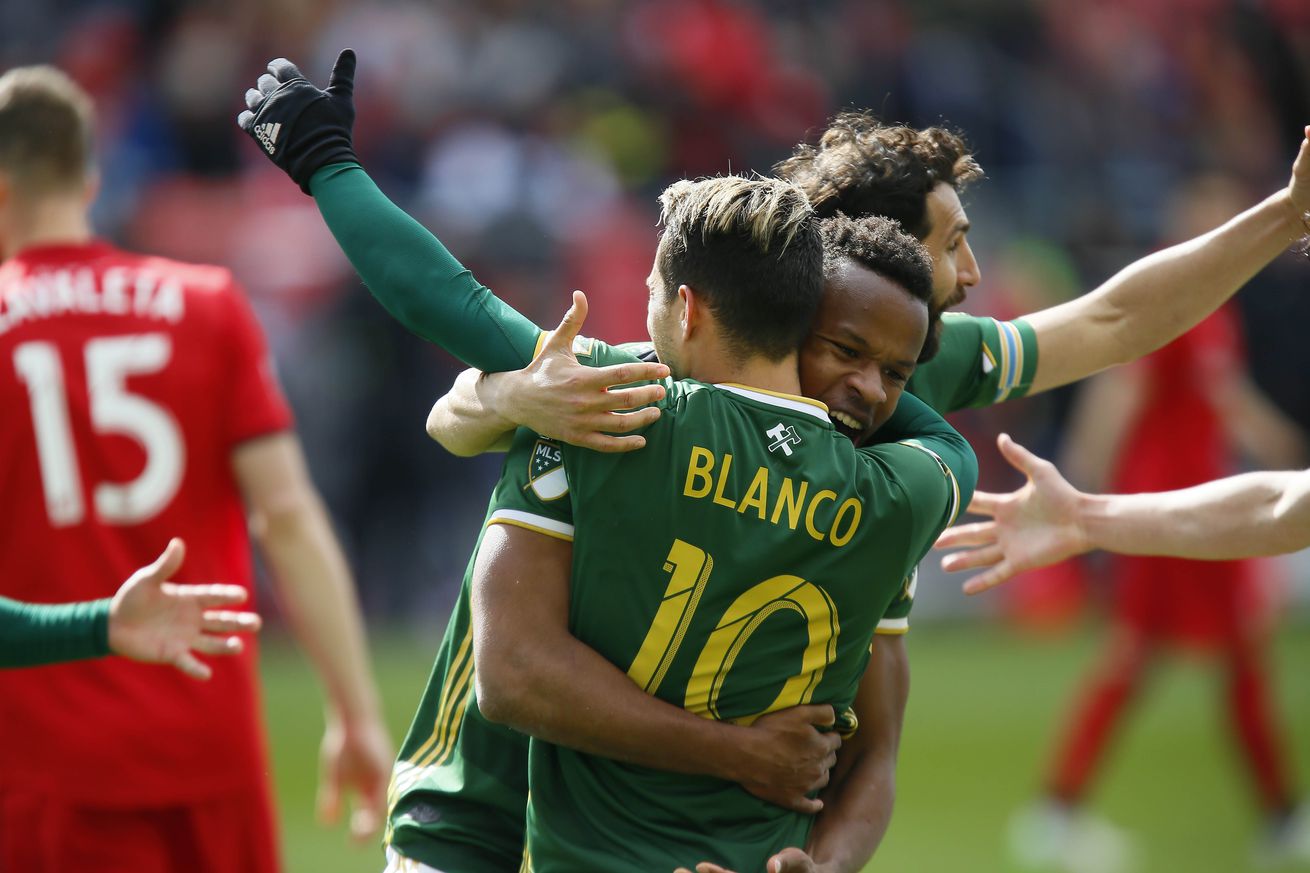 Toronto FC suffered just their second loss of the season this afternoon, while the Portland Timbers picked up their second win. A diving header from Jeremy Ebobisse proved to be the difference in an otherwise cagey 2-1 affair at BMO Field.

Toronto took the lead after 20 minutes as Jonathan Osorio bundled home the rebound from a Eriq Zavaleta header. However, Portland tied the game four minutes later from a corner of their own and a brilliant volley courtesy of defender Bill Tuiloma.

Without Jozy Altidore in the lineup, Toronto FC struggled to create chances throughout the match. Portland also did a good job of shutting down Alejandro Pozuelo, who was reasonably quiet for most of the 90.

70’ – 2-1 Portland Jeremy Ebobisse with an incredible diving header gives the Timbers a 2-1 lead.

67’ – Not many chances for either side in a second half that is much like the first. Portland are doing a good job of limiting Alejandro Pozuelo’s time and space. He has been a non-factor in this half. Jordan Hamilton has now been replaced by Ayo Akinola.

HT – The score remains 1-1 at the half. Not much separating these two sides right now. Portland have probably been the better side, but for some great interventions from Chris Mavinga.

24’ – Portland reply from a corner of their own as Bill Tuiloma scores on a very nice side footed volley. Poor defending from Toronto as they fail to pick up his run.

20’ – Jonathan Osorio gets Toronto FC off the mark. An Eriq Zavaleta header from a corner is cleared off the line but Oso is there to tuck it home. 1-0 Toronto.

1’ Kickoff – We have kickoff in Toronto after a 1-1 draw in the inaugural CanPL game between York 9 and Forge FC. Toronto FC loanee Ryan Telfer scored the first goal in league history.

Toronto FC’s lineup is out:

April 27, 2019. Gonna be a big day for soccer in the GTA. The Canadian Premier League kicks off for the first time this afternoon at 1, with York9 FC taking on Forge FC. Not long after that, Toronto FC will attempt to add to their strong home record in a match against the Portland Timbers.

So, we’ve got a mega-game thread for this one. Not sure yet how it’ll roll throughout the day; looks like Mitch will be running our TFC coverage for the afternoon.

Anyway. TFC have a decent test ahead of them in Portland. Although the Timbers sit 11th in the Western Conference right now (with a 1-1-5 record), there’s a lot of talent in that lineup. Diego Valeri is one of the best players in the league, just two years removed from an MVP trophy, and he’s got a goal and three assists this year. Sebastian Blanco is also a dangerous talent in what’s overall quite a scary attacking midfield.

The Timbers’ lone win of the season came last week, when they beat the Columbus Crew 3-1 in Ohio. So, they’re riding a high after getting that particular monkey off their backs.

TFC will have to deal with the loss of Jozy Altidore up front, which will seriously hurt them for the next 2-3 weeks. Jordan Hamilton is coming off a two-goal performance last weekend against Minnesota United, so that should inspire some confidence, and Alejandro Pozuelo should inspire even more.

Out in the Hammer, York9 and Forge will battle it out to briefly sit atop the CPL’s first-ever league table. The hosts have a ton of firepower, with the likes of Emery Welshman expected to fill the net all season and newly-named captain Kyle Bekker likely to set things up from midfield.

York9 have one of the most intriguing lineups in the league, with a very strong backline led by Luca Gasparotto and some exciting players like Ryan Telfer, Wataru Murofushi, and Simon Adjei all very dynamic attackers.

It’s very tough to get a read on which team has the edge in this one, but most people seem to think Forge might have the (very slight) edge.

Stick with us all day.

No injuries we know of in the CPL match.

Toronto FC: Jozy Altidore (hamstring) will miss the next 2-3 weeks or so.

Portland Timbers: Backup goalkeepers Aljaz Ivacic and Kendall McIntosh are out with injury, and midfielder Marvin Loria is questionable.