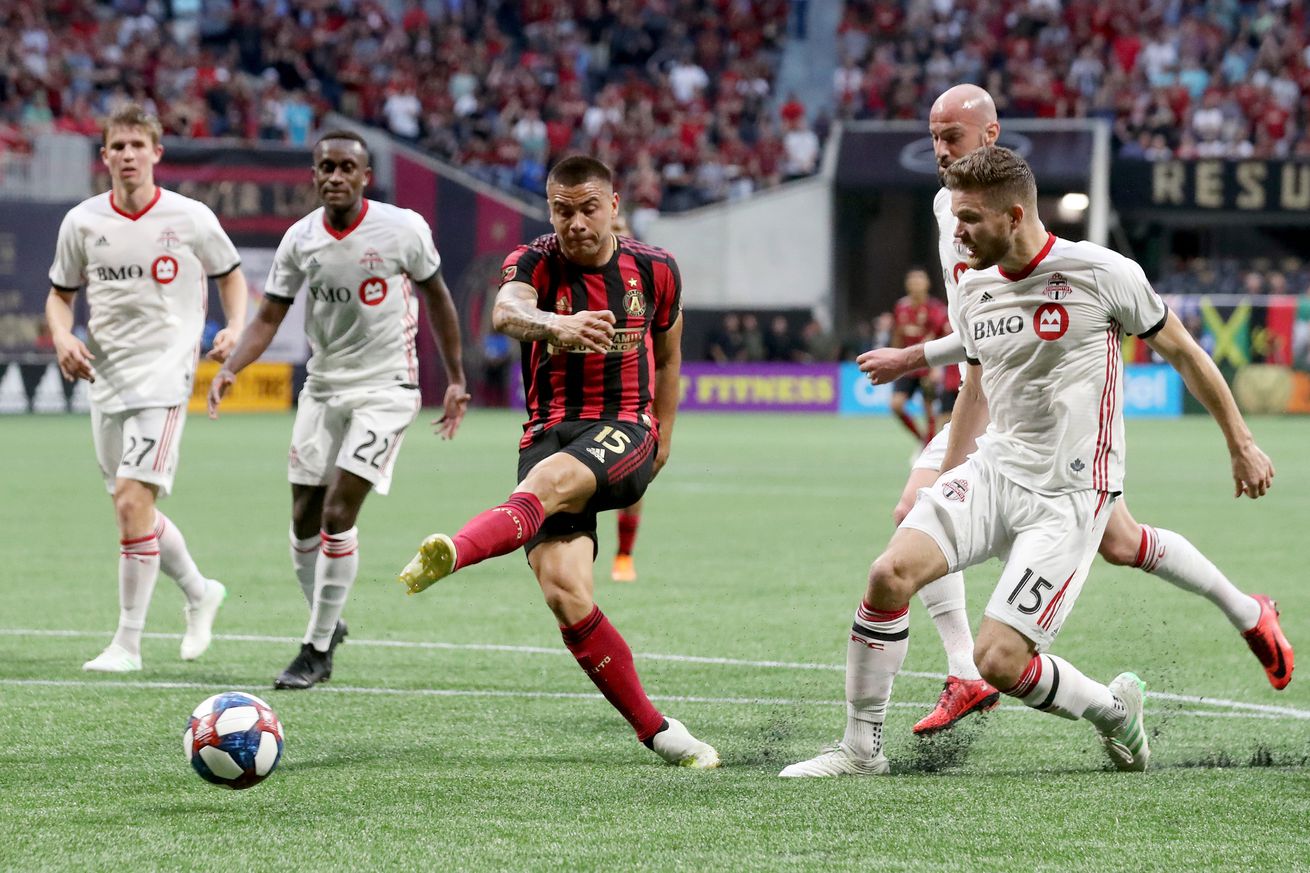 The Reds lose to Atlanta United for the first time

It’s always a risky decision to make seven changes to your starting lineup, especially against the reigning champions, but that’s exactly what Greg Vanney was forced to do on Wednesday evening.

After a grueling match in Orlando on Saturday, Vanney left six starters from that game on the bench for this midweek game (Jordan Hamilton wasn’t in the 18), giving rare starts to Eriq Zavaleta, Jay Chapman, Liam Fraser, Ashtone Morgan and Richie Laryea.

One of the changes was bringing in Ayo Akinola to replace Jordan Hamilton up top, and Akinola had a great chance to score in the opening moments of the game.

In the fifth minute, Akinola ran down the wing and charged toward the Atlanta goal, but seemed to hesitate slightly, giving Leandro Gonzalez Pirez a chance to catch up to him and knock the ball away.

Just three minutes later, TFC were knocking on the door again, as Nick DeLeon tried to slide the ball across the face of goal to Akinola, but after a defender slid in to get the ball away, it fell to Jay Chapman, who shot it well over the bar.

After controlling possession for the first quarter of an hour, it was Atlanta United’s Josef Martinez who had the best chance of the game in the 15th minute, as he fired a ball past Alex Bono’s post. Bono got his fingertip to it just in case, but it was probably going wide.

Just two minutes later, Martinez would pick up an assist on Atlanta’s first goal of the game, a tap in from Tito Villalba. After Pity Martinez’s free kick was kept out by a diving Alex Bono, Josef ran onto the rebound and fired it across the box for Villalba to sweep it in from a couple of yards out.

Michael Bradley nearly equalized in the 27th minute after a bad giveaway from Brad Guzan. Guzan tried to find one of his teammates with a pass through the middle of the pitch, but Bradley stuck a foot in, and the ball went spinning along the turf toward the net. The ball ended up spinning so much that it went wide of the post, so TFC remained down a goal.

Tito Villalba had a chance to score in the 41st minute, but the post turned it away, and Toronto FC entered the break down 1-0.

After the interval, Jay Chapman and Ayo Akinola linked up nicely on the edge of the penalty area, but Akinola’s shot went just wide, so TFC remained goalless.

Greg Vanney then opted to make all three of his substitutions within a few minutes of each other, as Terrence Boyd, Justin Morrow and Jonathan Osorio all came off the bench to try and salvage a result.

In the 67th minute, moments after an Atlanta United goal was called back for an offside, Julian Gressel doubled Atlanta’s lead with a shot from about 10 yards out. His shot took a deflection off Laurent Ciman and past Alex Bono, giving the home side a 2-0 advantage.

Other than a Pity Martinez free kick that crashed off the crossbar in the 77th minute, there wasn’t a lot more excitement in the later stages of the match. Atlanta did have another goal called back for an offside in the 88th minute, which would’ve just rubbed salt in TFC’s theoretical wound.

This game was the first time this season that TFC have been kept off the scoresheet. They will try to bounce back on Saturday afternoon when they host the Philadelphia Union at 3 p.m.