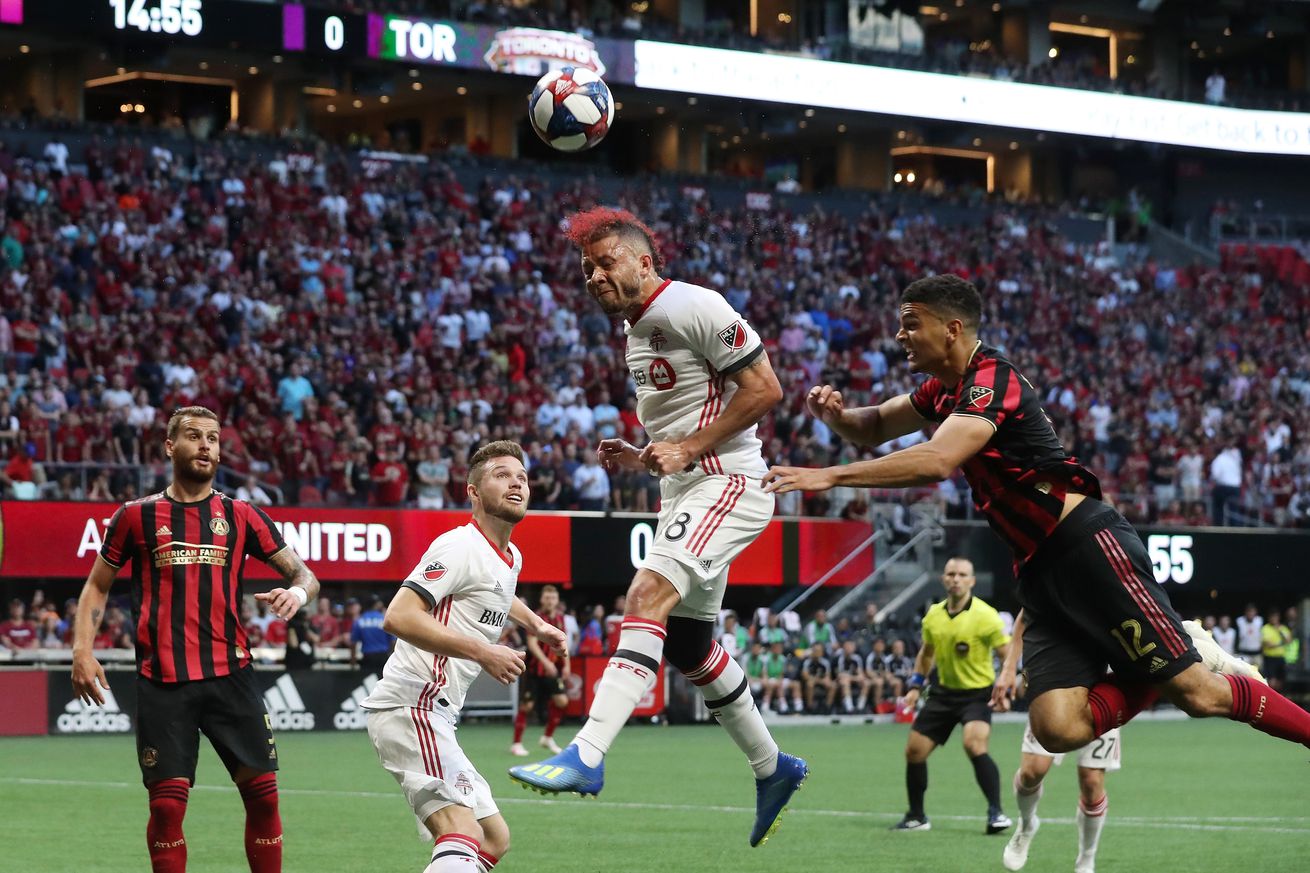 Getting striped by the Five Stripes is always a pity.

The new turf at Mercedes-Benz Stadium looks crisp. Pity that the NFL season will ruin it… speaking of Pity, that free kick off the crossbar was pretty… over 42,000 fans for a mid-week match… today’s tongue twister: Pity’s pretty peach proudly pinged past Poz’s panicked pal. (I don’t really know if Poz and Bones are “pals” so, if they aren’t, then I apologize for the poetic licence)… Bono’s save on the first-half free kick… the tight, but legitimate, off-side calls on Josef Martinez… Tito Villalba’s new hair cut. He looks sinister… the “Gressel Mania 24” sign… Atlanta United has finally bought into Frank De Boer’s system. This is a lesson in being consistent and sticking with the right plan that properly uses the talent on the field. Hope the gang on the other side of centre had their notepads out… Terrence Boyd recorded his first ever stat on an MLS score sheet. Pity that it was a yellow card.

Playing the Wizard of Poz on turf, especially after his comments in Seattle… a very tired Wizard. A full season in Europe (including Europa League), plus the drama of moving to T.O., plus the physicality and travel of MLS have finally caught up with our main offensive threat… Akinola not jumping with the wall on Pity’s kick. Reminded me of Pirlo staying rooted to the ground at BMO on one of Giovinco’s specials… Greg Vanney was badly out-coached in this match. With many games in quick succession, everyone knew that the team would be stretched. This was where the coaching staff needed to steal at least a point for the team… Zavaleta’s two-handed tackle on the goal line that prevented Bono from even attempting to block Villalba’s tap-in… the Captain also looks tired. Lots of uncharacteristically lazy fouls. And this is only after nine games… Vanney continuing to push the full-backs against the sidelines while playing four at the back. He was the one waving Laryea wide in the first half. That left a gap the size of the Panama Canal for Tito Villalba to enjoy… speaking of Panama, shouldn’t Terrence Boyd have been awarded three points for his field goal against Independiente?

The backs of Atlanta’s jerseys. This is looking like another misguided Newcastle United kit fiasco in the making. Just leave the thing alone… Brek Shea… Steven Caldwell trying to shout over the capo. The on-field mic placement was disgraceful (understatement). Can’t blame TSN for that (it was the home team’s feed). But, can blame TSN for poor sound editing and a screaming Caldwell… Brek Shea… no one jumped through the open transfer window. There are ten games between now and the next opening (plus the time that it will take for any newbie to acclimate), and our defence is weak and we don’t have a healthy starting forward that can do the job. I know that Ali Curtis tried his best. But, what did Sean Connery say about “trying your best” (The Rock – 1996)?… Nick DeLeon’s hair. Villalba’s an assassin and he’s a rooster… Brek Shea.