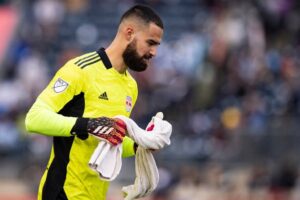 EDITORIAL – The curtain closes on another Red Bulls season with a familiar theme: playoff heartbreak. It ended in a new kind of brutal pain, a 123rd wonder goal, the latest in MLS history in the loss at Philadelphia Union on Saturday. But reaching that point of postseason disappointment saw ups and downs the likes a fanbase has rarely seen.

From the beginning back in April, Gerhard Struber and his players had to learn a lot of each other how to play alongside one another. Several new signings blending together to usher in the usual Red Bull style of play. A new goalkeeper, new defenders, midfielders and strikers all at a new home. Early signs weren’t promising as the team struggled, players struggled and results were falling.

But with time came changes, and all of a sudden a swing in form that no one saw coming. A formation change, ideas connecting through the squad and a defensive unit that stifled opponents. The Red Bulls came out of it all as one of the best teams in the second half of the season. A twelve game unbeaten run in the fall that saw just one defeat. It was followed by a twelfth consecutive playoff appearance. The 2021 Red Bulls season saw a bit of everything, let’s look over it.

One of the many new signings, the Brazilian net minder came from Red Bull Salzburg on loan with a club option to purchase. The familiarity of working under Struber, as well as his experiences in the UEFA Champions League, made a him a good fit. But it was shaky early on, conceding goals and some other nervy moments in the beginning. Calls for backup Ryan Meara to take over were shot down with authority by Struber, who displayed complete faith and confidence in the 24-year-old.

The faith would be repaid in full. Thirteen clean sheets had the team tied for most in the league. Multiple eye-catching saves in crucial moments, it was surprising he wasn’t nominated for Goalkeeper of the Year. He played a massive role in this team clinching a playoff berth, as this save against Nashville proves.

My personal favorite from this year was another point-blank denial of against Anton Tinnerholm in the crazy 1-1 draw against NYCFC. The fight to make this loan a permanent transfer is priority number one, two and three for this team. A good goalkeeper makes a big difference, Carlos Coronel has proved he’s already amongst the best in the league.

What a save this was, Carlos! pic.twitter.com/c3LW2rEZ9e

Much was made early on the impact Gerhard Struber needed to have on this team in order to make sure the Red Bulls didn’t slip behind the Eastern Conference pack. Not everything came along in the beginning, but over time Struber made his mark. He changed formation from the 4-4-2 diamond in the middle, to a 3-4-2-1 formation that saw more balance and structure along the lines. The emergence of John Tolkin and Wikelman Carmona grew throughout the season too, he’s a keeper for next year and possibly beyond.

Now, it’s rare that coaches work from front to back, from attack to defense. So in working with the defense, that unit leveled up into one of the toughest in all of MLS. The 33 goals conceded finished tied for the fewest in the league, with a three-man defense delivering last-ditch tackles and clearances. Carlos Coronel of course played a part in this. A bright spot in defense was the play of Sean Nealis, who grew in stature since the terrible loss of Aaron Long early on. It was a welcome surprise, and something to look forward to when he does play alongside Long next season.

A number of new signings showed out as well. Andres Reyes came from Atletico Nacional in Colombia, and excelled alongside Nealis and others. The 21-year-old has displayed the physicality and aerial ability to dominate his marker. He’s going to be fun to watch next season. Striker Patryk Klimala chipped in a team-leading eight goals as well as six assists. It took him a while to adjust but the Polish international does get in behind and shows the willingness to make smart runs, 2022 could see him double digit goals. Other loan signings like Andrew Gutman (from Atlanta United) and Tom Edwards (from Stoke City) performed well and gave depth and competition to wing-back spots. Both even played as center-backs when ranks were thin, showing versatility.

Captain Sean Davis deserves massive credit as well. The midfielder played every minute of every game, even while going to the hospital to visit his parents battling cancer. Davis has been an immense member of this franchise since he started back in 2015, resigning him is another crucial priority in the offseason.

While the defense came up large late in the season, the attack fell far behind. The Red Bulls scored 39 goals this year, only five teams (Chicago, Cincinnati, Inter Miami, Houston, Austin) scored fewer. Toronto FC scored just as many and finished second-bottom in the Eastern Conference. And while it didn’t stop them from reaching the postseason, New York couldn’t bury their chances in regular time and extra time. Out of the 27 teams, the Red Bulls ranked 20th or worse in shots on target per match, big chances created and goals per match.

As a collective, it was a struggle to watch. Ten times this season the Red Bulls scored more than one goal, and it felt as though they were made to overexert a bit to make that happen. Individually, some performances dipped such as Caden Clark who couldn’t replicate his early season form. He was often on the bench and at times struggled to get into the flow of games. Whether he’s off to Germany for Red Bull Leipzig is yet to be determined, maybe another season in Harrison could do him some good.

Regardless, there needs to be solutions up front next season for the Red Bulls.

Where The Red Bulls Need To Improve in 2022 Season

It’s shaping up to be another crazy offseason for the Red Bulls. Players like Davis are out of contract, and there’s transfer rumors swirling around the likes of Kyle Duncan and Cristian Cásseres Jr. Should the latter cash in on a move abroad, the Red Bulls could be in position to upgrade the attack.

They’ll need a creative number 10, a hybrid-type that can serve as a winger and a link between defense and strikers. New York may need another striker up front if they don’t exercise a purchase option on Fabio. They can instead elect to bring up Omar Sowe, who was part of Red Bulls II. Another option is a winger, a true threat on the flanks who can win fouls and be a focal point. Omir Fernandez is arguably the only true threat from out wide, and his absences were sorely missed.

The Casseres case is an interesting one. Should he leave, it’d be Davis and Dru Yearwood as the midfield pair. Others such as Frankie Amaya will provide competition, Youba Diarra came on loan but will likely be sent back due to injury issues. A number-6 type midfielder that can keep and recycle possession and provide some pausa would be great. But should the Venezuelan stay, does he stay on the wing? Does he go back to midfield? And if so, does that prompt a formation change? Only Gerhard Struber and his assistants will know for sure.

Head of Sport Kevin Thelwell has done well to keep this squad young and add depth in some positions. There’s going to be a logjam at center back when February rolls around. But there is trust that their scouting and shrewd moves can bring in more talented players. Some deadwood will need to be shed and let go, which can free up some room to make a move. The difference will be in the details, and the Red Bulls can challenge for top-4 in the East. A home playoff game will be one of the aims.

With the return of the U.S. Open Cup next year, depth will be tested. A proper preseason will do this club very well, something they missed in 2021. New York already has a defense ready to shut down opposing offenses. A thirteenth consecutive postseason berth is in play, anything beyond and better than that will likely be historic. The future is bright, and 2022 is already eagerly anticipated.