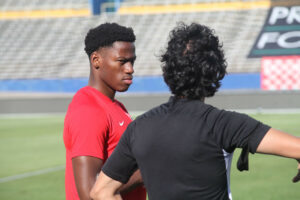 ANALYSIS – It wasn’t pretty, but the CanMNT grinds out win over Costa Rica. They don’t ask how, they ask how many. The CanMNT was able to get a crucial 1-0 win Friday night over Costa Rica in Edmonton. Jonathan David’s 57-minute tap-in was the difference in a game where very little offence was to be had. The result keeps Canada the only undefeated team seven matches through the final round of CONCACAF World Cup Qualifying.

Change in Formation For John Herdman

Canada lined up in a different tactical formation than accustomed to through the first six matches. Perhaps trying to surprise Costa Rica, Canada lined up in a more traditional 4-4-2 formation, as opposed to the typical 3-5-2 setup. A casualty to this was Alistair Johnston, who was dropped to the bench after he had previously started the first six matches. This saw Kamal Miller play CB in a back two for one of the first times for his country, and he and Vitoria did well in limited defensive duties.

Costa Rica, on the other hand, knew they had a tall task in front of them. So, manager Luis Suarez lined them up in a deep sitting 4-5-1 formation that focused on defending all night long. It worked extremely well in the first half, and one could argue the entire game, if not for the one mistake by keeper Leonel Moreira. Canada had fits breaking down a very organized Costa Rica team. The downside to this plan was it left striker Jose Ortiz on an island up top and he had little help generating any threatening counterattack.

Canada Having Difficulty Breaking Down Defenses

Although Canada got the victory on the night, it was apparent they still struggle to break down teams willing to sit in low blocks. Most of Canada’s dangerous attacks generally comes via transition, and when teams like Costa Rica gameplan around that as they did in this one, Canada struggles to find offence. While Mexico should be more willing to attack on Tuesday, this is one issue Canada must figure out soon, heading into 2022 and beyond.

Canada had a lot of the ball, but lacked the players that benefit from a possession-based style. Steven Vitoria isn’t the best ball playing defender, and Canada was outnumbered in centre midfield. Perhaps going forward, an extra body would help Canada progress the ball in situations like this. More quick movement of the ball from side to side would be very welcome.

Perhaps some of the inability to move the ball was due to the conditions of the pitch. It was clear to see that the playing surface was worn down and old, and the ball took funny bounces on numerous occasions. This really hurt the Canadians more than Costa Rica, as it suited Costa Rica’s longballs more than Canada’s ground-based attack.

Sam Adekugbe Makes Most of Opportunity

On a night where much was made about Alphonso Davies homecoming, it was another Alberta boy that stood out. Calgary’s Sam Adekugbe was a bit of a surprise starter, but his performance backed up the decision all the way. Adekugbe made some threatening runs forward to help generate attacks, including completing two of three dribbles. He was also rocked solid defensively, which is something you come to expect from him. The twenty-six-year-old has carved out a key role in Hatayspor’s early flying start in Turkey’s top flight.

Another player who put in a great shift Friday was Stephen Eustaquio. Ever since he first put on a Canada shirt, he has been the engine of the team in the midfield. Eustaquio was great all summer for Canada, and tonight was no exception. Eustaquio lead all players in completed passes (66), key passes (3), and accurate crosses (3). He also provided the best service of any Canadian from set-pieces, and it was his cross that Moreira spilled to David for Canada’s goal.

David Johnny on the Spot

Jonathan David continued his wonderful goal-scoring form for the club with Lille. While this goal was mostly created by the Leonel Moreira error, credit should still go to David for being in the right place at the right time (American viewers can view the goal with this link). David was composed and cool and made no mistake. The goal is his eighteenth for Canada in twenty-three appearances, which is quite an incredible scoring record.

Canadian keeper Milan Borjan returned to the team with another clean sheet Friday, and his contribution should not be ignored. Despite Costa Rica having very little interest in attacking, Borjan had to make one really good save in the first half to keep the match scoreless. After keeper Max Crepeau played so well last window for Canada when Borjan was out due to COVID-19, Borjan had to be strong when called upon, and he was.

‘Phonzie’ with a Quiet Return to Edmonton

After his heroics singlehandedly changed the outcome for Canada last time out, Alphonso Davies was relatively quiet. Davies tried to attack defenders, as he usually does, but more often than not Costa Rica outnumbered him. The Bayern Munich star completed only five of thirteen dribbles and only one of eight crosses. Davies was still a threat, and his presence opened up room for teammates. But there’s definitely another gear or two in him. Maybe he’s saving it for Mexico.

A Win is a Win

At the end of the night, Canada escaped with a 1-0 win. Despite having sixty-two percent possession, it only amounted to two shots on target for Les Rouges. Tajon Buchanan came oh so close to delivering another wonder goal for Canada, but it wasn’t to be. However, wins do not need to be pretty and Herdman’s boys will take three points when they can get them.

Razor Thin Margins Ahead of Canada

This is where every national team stands ahead of more Final Round action next week. Any surprises? #CWCQ pic.twitter.com/C6ADsUZw2p

Despite another gutsy win, Canada was unable to make its spot in Qatar any safer. Panama pulled out a huge 3-2 win over Honduras to keep pace with the Canadians. This means Canada still only sits two points ahead of them. With a match against Mexico looming, it leaves Canada with almost no margin of error. Even after seven unbeaten matches, just one slipup against a hungry Mexican team could see Canada out of the automatic qualifying spots come Tuesday. It just goes to show you how gruelling qualification can be, and how dangerous complacency can be.

Costa Rica now sits five points back of Panama for fourth place, which puts their chances at Qatar quite slim.