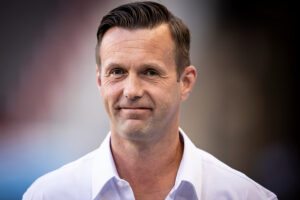 EDITORIAL – Following a run of eight games which saw NYCFC pick up five wins, two draws, and just a single loss pushing the club into fourth place in the Eastern Conference, the Bronx Blues seem to have come crashing down with a 3-1 loss at the weekend to third place Nashville SC.

While head coach Ronny Deila primarily opts for a backline featuring Gudmundur Thórarinsson, Alexander Callens, Maxime Chanot, and Anton Tinnerholm, adjustments needed to be made with Thórarinsson, Callens, and Chanot all on international duty with their respective nations for World Cup Qualifying.

This forced Delia to start secondary left-back Malte Amundsen, defensive midfielder Alfredo Morales, and 2021 third-round draft pick Vuk Latinovich in place of the three international call-ups with Morales struggling in his newfound position and Latinovich adding an own goal to the scoreline in a match that saw NYCFC’s Maxi Moralez and Nashville’s Dax McCarty each pick up a straight red card in the 44-minute.

In spite of the fighting that ensued between the two sides at Nissan Stadium and the defensive mishaps from NYCFC, the boys in blue still managed to create an attacking spark behind six shots from Santiago Rodríguez and MLS’ August Player of the Month Valentín “Taty” Castellanos who found a last-minute consolation goal before full-time.

.@tatycaste11anos tallies his 11th goal of the season

But these various ups and downs of New York City’s season have posed the question could they be realistic MLS Cup contenders for this year especially given the youthful additions of Talles Magno, Thiago Andrade, and Rodríguez on loan, who all joined during the recent summer transfer window.

The Positives and Negatives of NYCFC this Year

NYCFC has shown signs of their proficiency this season such as a 5-0 thrashing of second-place Orlando City at Yankee Stadium on July 25 and even as recently as August 28 beating the Supporters’ Shield leading New England Revolution 2-0, albeit with a few key players missing.

But they also go through concerning periods such as dropping crucial points with back-to-back draws against eleventh place Chicago Fire and last-place Toronto FC. Or even ending this latest eight-game run by losing poorly in Nashville with the opportunity to overtake Gary Smith’s squad in the Eastern Conference standings on the line.

NYCFC: Positive Play from the Forwards and the Midfield

While their play on the field has fluctuated, Delia has found consistency from his forwards with Castellanos catching fire this year to bag 11 goals, currently tying him for fifth in the Golden Boot race. They also have Designated Player Jesús Medina and winger Ismael Tajouri-Shradi both scoring at a high level with seven goals each and Andrade who’s scored three and assisted once since his early April arrival.

And the midfield has really stepped up too with Maxi Moralez continuing to play the number ten role where he’s managed eight assists alongside the emergence of Keaton Parks and James Sands who have become two of the more quietly effective defensive midfielders in MLS. With those three in the starting lineup together NYCFC has won 5 matches and lost just 2, both losses coming by just a one-goal margin.

When they have their best players available NYCFC have been more than capable of competing with the top sides in the Eastern Conference and their resumé so far this season includes victories over Orlando, New England, and Philadelphia but it’ll be important to see how the team finishes out their final thirteen games.

If a 34-year-old Maxi Moralez can stay healthy while keeping up his production with Castellanos continuing his breakout season and the supporting cast at NYCFC getting on the field, maintaining a high level of play, the boys in blue should definitely be in the conversation for the cup come playoff time.

The next match will be a good test for New York City FC. NYCFC’s next game will be on the road at Gillette Stadium against current Supporters’ Shield leaders, the New England Revolution next Saturday. The game will take place at 7:00 p.m. ET.