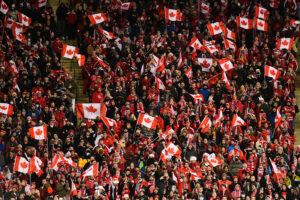 PREVIEW – The confident CanMNT faces El Tri in Commonwealth Stadium at Edmonton, Alberta. The game between Canada and Mexico are important for both teams for different reasons.

The CanMNT got their second-straight win in Concacaf World Cup qualifying. In fact, Canada did not get a shot on goal in the first half. Their best chance though did come early in the game when a Costa Rican player almost put the ball into the back of his own net. However, the CanMNT started to play better in the second half.

The goal happened because Costa Rican goalkeeper Leonel Moreira made a mistake with the ball. However, give credit to Jonathan David. He was alert to the mistake and had a composed finish to give Canada the game-winning goal. This means that David has scored 18 goals in 23 appearances. This is what David said about the goal and the crowd at Commonwealth Stadium according to Sportsnet.

“I think, so far number one, because I think this is the most important one because it puts us in a nice place in the standings and I think seeing how many people were here today was incredible, and we’re very happy with the win.

David currently leads the team in the Octagonal with three goals.

Mexico will be travelling to Edmonton after suffering a 2-0 defeat against the U.S. at TQL Stadium. This was the first loss Mexico suffered in the Octagonal World Cup qualifying. It was also the third defeat they suffered against the U.S. this year. According to Lizzy Becherano of 90min, Mexican head coach Gerardo “Tata” Martino said this:

“The game had changing moments, we were the first we had to hit in the first half with clear opportunities, the holding was shared and what I feel is that in the second half we lowered the intensity a bit,” he said.

Also, in that article, he explained that Mexico’s offence is not a problem. However, he will face a Canadian team that has not given up more than one goal in any World Cup qualifier game this year. They have several players with one goal including Jorge Sánchez.

“Thank you for inspiring us and bringing Canadians together around soccer.” – @JustinTrudeau

Thanks for the visit, Mr. Prime Minister!

The CanMNT’s ambition is to leapfrog Mexico and get first in the Octagonal table. This is what Sam Adekugbe said according to the Winnipeg Free Press.

“We’re one point out of first, and we know what our ambitions are,” said fullback Adekugbe, the Calgarian who Herdman identified as the man of the match.

The CanMNT will be motivated to play at the highest level against Mexico on Tuesday. Just like the game at Estadio Azteca, Canada will believe that they can beat Mexico. Also, the weather may play a factor as it will be -4 degrees Celsius, but it will feel like -16 degrees Celsius and it will take place at Commonwealth Stadium on Tuesday at 9:05 p.m. ET. CanMNT fans can watch the game nationally on Sportsnet, and also watch it on Telus and OneSoccer.

Photo credit to Canada Soccer by Martin Bazyl on November 12, 2021.