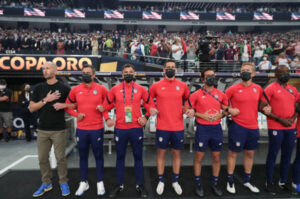 PREVIEW – Ladies and gentlemen, we have reached a special time of the soccer calendar – World Cup Qualifying, with El Salvador hosting the USMNT. This will be a momentous occasion, as La Selecta play at the famed Estadio Cuscatlán. A near-full capacity crowd will be on hand to see Hugo Perez’s men welcome Gregg Berhalter and company into hostile territory.

In terms of head-to-head history, there’s not much when it comes this realm of qualifiers, but it does go back some time. It’s a history that dates back as far as September 1989. The last encounters were in 2009, where two great games were played. The more memorable was the 2-2 draw in which El Salvador held a two-nil lead up until the 72-minute. From there, goals by Jozy Altidore and Frankie Hejduk stunned the home crowd in which they eventually advanced to the 2010 World Cup in South Africa.

This 2021 edition will be just the fifth different occasion the two national sides will do battle in World Cup Qualifying. History is against El Salvador – they have never defeated the United States in eight previous attempts in World Cup Qualifying. So, for obvious reasons, Berhalter’s team are favorites on the road against their opponents led by former USMNT midfielder Hugo Perez. However, this game feels different. Spirits are high for La Selecta after an impressive showing at this past summer’s Gold Cup. So is a shock on the cards? Or will it be business as usual for USMNT? Let’s take a deeper dive.

Both teams in high spirits

The aforementioned Gold Cup this past summer went pretty well for both national teams. For the winners, the USMNT, it couldn’t have gone any better when they defeated arch-rivals Mexico in extra time. The Miles Robinson header was the icing on the cake for the “B-team” of the United States, when their “A-team” also beat Mexico in the Nations League final weeks prior. And indeed, it is the latter which will take the field in San Salvador. Berhalter was able to instill his tactics and rotate his team to a successful summer. So much so, that players from the Gold Cup squad have made it onto the plane for Thursday night’s game. A view from 30,000 feet will have them as the favorites for top-spot in the octagonal.

El Salvador had their own success at the Gold Cup, winning its opening two matches against Guatemala and Trinidad & Tobago. While losing the Group A decider against Mexico stung, they held their own and were dangerous for spells of the contest. The optimism remains even after the knockout round loss to Qatar. And it remains because Hugo Perez is at the helm. He has used his Salvadoran-American connections to bring in players that immediately raise the quality of the squad. It’s paid big dividends. One could argue this edition of El Salvador is the best in the last 40 years – since 1982. In that time, the side was led by Jorge “El Magico” Gonzalez for the World Cup in Spain. That World Cup was the last one La Selecta has reached, something fans and players alike are hoping to change.

Due to summer tournaments, the commencement of domestic leagues and a fixture congestion, the issues of fitness and availability have risen. Unfortunately, it’s raised questions in both camps. For the USMNT, the status of captain Christian Pulisic has come into question after testing positive for COVID while with his club Chelsea. According to Sam Stejskal The Athletic, Pulisic took part in training but Berhalter said it’s “too early” to determine if he’ll play this week. Both teams have three games in seven days starting from September 2-September 8. Tim Weah is another who’ll miss, this one due to injury.

The good news is the United States aren’t short of cover for both players. Konrad de la Fuente has enjoyed his start to the season for Marseille and is a daring, tricky winger who can take on defenders and beat them for pace. Brenden Aaronson and Gio Reyna for RB Salzburg and Borussia Dortmund respectively have bags of creativity and will cause opponents into mistakes.

El Salvador have their own fitness issues. Captain Darwin Ceren left the Houston Dynamo match against Minnesota United due to “knee trouble” in the first half. This one weighs more heavily on La Selecta because he and Alex Roldan have been great in midfield together. Other options are few and far between. Marvin Monterroza is the likely choice which could force Perez to play a 4-4-2 instead of a 4-3-3. It’s something to monitor as depth is a bit thin, most, if not the entire Gold Cup squad is part of the World Cup Qualifying side.

What to expect in El Salvador vs USMNT

This game will be fascinating to watch. From the outset, El Salvador will press the USMNT into losing possession. La Selecta love to control the ball with its passing, but the quality of the USMNT midfield could nullify them. The crowd will play a huge factor in this, Estadio Cuscatlán is not an easy place to play and win for opposing teams.

One thing that will also play a factor is the weather. Temperatures will be in the low-to-mid 80s with a high humidity in the 90s. Rain and showers are also to be expected which will also into the state of the pitch. The USMNT last won a World Cup Qualifier in El Salvador back in October 2004. On that night, goals by Brian McBride and Eddie Johnson secured a 2-0 win.

Individual matchups on the wing will also tell the story of this match. Fullback Bryan Tamacas will have his hands full against either one of Reyna, Aaronson or de la Fuente. Conversely, Joaquin Rivas will present problems to the center backs of the United States. The FC Tulsa forward led the team with three goals in the Gold Cup. It’s no surprise pundits and fans on both sides of the land are eagerly anticipating this fun matchup.