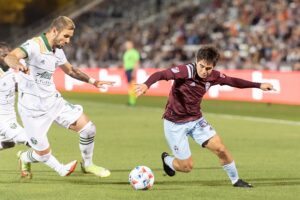 EDITORIAL – The Colorado Rapids will host Portland Timbers in a second round MLS Cup Playoff match on Thursday at 2:30 PM MT. It will be the first Thanksgiving Day game in the history of Major League Soccer. A lot of people, myself included, were concerned when this game got announced and more so when it became a Rapids home game. Here’s why an MLS Thanksgiving game is worth trying and why Pidsgiving should exceed the expectations of the naysayers.

MLS has been working its way into national tv time slots on holidays for years, as almost every person I spoke to for this piece reminded me. We’ve seen teams have success locally with increasingly traditional 4th of July, Memorial Day (weekend), and Victoria Day matches. The league already has taken Juneteenth seriously and with the continued help of the BPC will continue to do so.

With a league season that runs early February to early December, Thanksgiving was the next lowest hanging fruit. College Football owns Labor Day weekend. While the NFL has a monopoly on live sports on Turkey Day, its been limited to two or three games for over a generation. The Detroit Lions and Dallas Cowboys are the only two teams that traditionally play on Thanksgiving. In terms of local market competition, that only affects FC Dallas.

This is an initial experiment for MLS. Who knows if it will stick or become tradition given the playoff schedule. Gridiron football on Thanksgiving dates back to the 1800s and the NBA on Christmas Day started in 1947. Heck, Boxing Day’s been a tradition in the EFL since the end of World War I. Traditions in sports take time and growth.

“We couldn’t be more thrilled to earn the right to represent ourselves and the league in this moment. The opportunity for us to host it is an incredible motivator. We’re going to create a special event and one that’s going to be long remembered in MLS and Colorado,” Executive VP and General Manager Padraig Smith told Last Word.

The first one through the wall always gets bloody; nonetheless the Colorado Rapids feel eager and prepared.

For Don Garber and company, it was just a matter of if and when one of the networks would be willing to dedicate a prime time slot to an MLS playoff game. That came this year with Fox offering the post-Lions 4:30 PM ET window. With it getting announced September 9, making the most of this opportunity would then come down to planning and lead time.

Chronologically, the Thanksgiving game is the seventh match of the MLS Cup playoffs. That would put it as the first game of the second round. There was some speculation that this was in doubt, but a league source has told Last Word on Soccer that was not the case.

I’m sure Fox made that request under assumption that either Sounders or SKC would win West. Rapids threw a wrench into things and now there’s a lot of horse-trading to figure out how to make it work.

Fox and the league were willing to shoot this shot with the prospect of it being a home match for one of the big teams that puts up good ratings. As Jeremiah tweeted above, the Rapids spoiled that plan.

But the notion that several Fox executives called Garber and complained, demanding the league to move the Seattle first round home match to Thanksgiving (thus having the second round start before the first round begins) because the Rapids aren’t ideal for national TV is fiction. For the sake of competitive integrity, the Thanksgiving game was always going to be the first match of the conference semifinals.

The next question is how Colorado got assigned this game. It could have gone to any of the other second round matches. MLS needed to give it to one of the conference champions, who had first round byes, to give the most time possible to market and sell tickets. If not, the best case scenario would have been Philadelphia Union winning on Saturday afternoon and having five days notice. Colorado got 17 days lead time.

Other than Bruce Arena inevitably complaining, why didn’t this game go to the Eastern Conference Champion New England Revolution? The 4:30 PM ET slot is tricky locally:

If this game was going to work attendance wise, there needed to be some leeway for supporters to still have Thanksgiving at home. Factor in a 28-mile drive from Boston to Foxborough and Revs fans either need to have an early Thanksgiving lunch or push dinner back to 8 PM or later (and not be around to help prep).

The further west you go, the earlier in the day the game kicks off, the easier it is to have a reasonably-timed Thanksgiving dinner. I’ll address the Thanksgiving lunch crowd later in this article.

Multiple sources have suggested that coaches, players, and staff of Colorado, Seattle, and Kansas City went into Decision Day knowing if they win the conference, they probably play on Thanksgiving.

“The players main focus was to take care of our business and beat LAFC. The rest of the results went our way. They players earned the first seed. They’re pumped to play on Thanksgiving. To do it at home makes it all the more special” said Smith.

The Rapids might be the best kept secret in American Soccer in 2021. They’ve got one of the best PPG since Robin Fraser was appointed head coach. They’re capable of playing entertaining and high level soccer. But due to the ongoing litigation with Altitude and the club not having a single national tv game all season, they just haven’t been seen.

For a small market club with those issues, having a home playoff game on Fox is a big deal. The only other live event competitor, albeit a huge one, is the Dallas Cowboys game. With all the doubt and disrespect shown to the Rapids this year, this is a showcase opportunity. It’ll be the first easy game of the year for every Rapids fan to watch if they can’t make it in person.

“To have the opportunity to play in the first ever Thanksgiving Day game in MLS history is something I’m really proud of. It’s an opportunity where people we’ll get to see us and see what we’ve been doing all year. And hopefully we go out and execute the way I know we can and we put on a good show” said head coach Robin Fraser.

It’s a chance for the Colorado Rapids to announce their existence with authority to some of the country. In that, the broadcast gains might be worth the ticket sales complications.

Outside of MLS Cup, this could be the biggest tv game of the year for MLS. A good crowd, performance, and result will be a statement to the competition and the audience. Whether this can be one of the top ten watched games in MLS history, we’ll find out.

DSG will not be empty:

I have to admit, this was the main cause for concern with this game. The one matchday of the year I’d expect even Atlanta and Seattle fans to not show up would be Thanksgiving. The Rapids fanbase and attendance are much maligned throughout the league.

Speaking with several club sources, the organization internally is optimistic and bullish. They got a head start on ticket sales. At time of writing, the cheapest ticket I can find on the secondary market is $35, and there aren’t many left anywhere under $40. If I remember correctly, the night before the home leg against the LA Galaxy in 2016, tickets started at $35. There’s a few more days to go for prices to rise as supply decreases. The club has put out a few promotional deals to those who’ve previously attended games. The Timbers travel well and as soon as they won their game on Sunday, I’m sure transplants and those interested in a Turkey Day Away Day increased demand.

“This the first Thanksgiving game in MLS history. We don’t know if it’s going to become a tradition. Is it going to be a sellout, probably not. This might be the only ever game on Thanksgiving. This might be once in a lifetime and we’ll be talking about it for decades just like Snow Clasico” one Centennial 38 said to me.

One club source confidentially told Last Word last week this will be at worst the third highest attended game of the season. The two biggest crowds of the regular season were 4th of July (17,104) and Decision Day (16,292). As of Tuesday afternoon, a sellout is not out of the question. That would be a statement for MLS on Thanksgiving and for support of the club going forward.

The Colorado Soccer Community is mostly embracing this:

The club’s organizing a Friendsgiving to compliment the C38 (mother of all) pregame tailgates. It’s reasonably priced based on what a typical Thanksgiving dinner would cost per person.

Local youth clubs are getting the word out and working to come to the game in groups. C38 for the most part is hyped for the historic aspect to this game. The club, the supporters group, and the community want to make Pidsgiving happen.

When one of the greats speaks, you listen! We’re excited to support our hometown @ColoradoRapids as they make the run to the MLS Cup!https://t.co/dFibFpGAUj pic.twitter.com/UWBRTnZ6nN

The club and the greater community could not have made it easier to watch the football and eat your turkey too. The only thing someone attending the match is missing out on is at home Thanksgiving prior to 7 PM.

Last Word: For those not attending

That being said, there are a number of Rapids supporters who are upset. 2020 robbed most of America of in person family gatherings. Some supporters feel they are having to choose between their family and their club. The reward of a home playoff game was spoiled or taken away by the fact that it’s on Thanksgiving.

This isn’t lost on the team. One club official expressed genuine empathy, saying they understand. They respect that some fans cannot or will choose not to attend this match and hope that the club can reward them with a win and a home match in the Wester Conference Final. The official hopes these supporters will be able to attend that game and a potential home MLS Cup Final.

It’ll be up to the Burgundy Boys to gobble up the Timbers to make that come good and mend any collateral wounds that have come out of this game.

The post How the MLS Thanksgiving Game Came to be and why Pidsgiving Will Succeed appeared first on Last Word On Soccer.