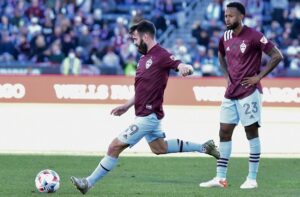 The first half was dominated by the home side. Portland had a siege mentality at times, but did well to absorb pressure. Dom Badji and Auston Trusty both had good looks off corners early.

Referee Ted Unkel had a decision to make on 22 minutes. On a recycled ball off a free kick, Mark-Anthony Kaye went down in the box while on the ball on a challenge by Diego Chara. No foul was called and VAR did not recommend a monitor review.

The best chance came in the 38th minute. Kellyn Acosta crossed the ball to the near post. Badji won the header with both center backs marking him. Timbers goalkeeper again answered the call with perfect positioning to make the point blank save.

Portland only had two positive moments going forward in the opening half. The better of the two was a spell of possession a half hour in that led to a shot for Sebastian Blanco and two corners.

The visitors started the second half positively. They were better in possession and got numbers forward. Things took a turn in the 50th minute however. Blanco made a run forward and shot, injuring his left hamstring in the process. He was subbed out for Santiago Moreno. The match slowed down after that with even possession but not many chances on goal.

Claudio Bravo should have opened the scoring in the 65th minute. On a frantic sequence around the Rapids goal, he shot from a sharp angle but center back Danny Wilson cleared the ball off the line.

The match seemed headed for extra time with Portland hanging around. The Timbers ended up winning the game at the death. In the 90th minute, Larrys Mabiala put away the ball on a corner that was initially deflected. Colorado couldn’t mount anything in the four minutes of stoppage time and the match ended 0-1.

Rust vs. rest: Portland came out knickered, which was to be expected. But they grew into the game. Colorado started out well but faded in the second half.

Big Man Mabiala: Larrys Mabiala now has two goals in two playoff games. He was a monster defensively and in the attack.

Lack of a finisher narrative: Colorado was buzzing in the first 30 minutes. They started great. They had their chances, just didn’t finish them. Like it or not, the greater MLS national media’s narrative about why this team is a paper tiger will continue.