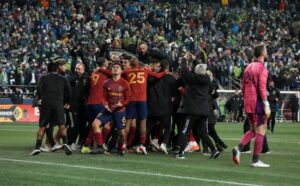 PODCAST – What’s up Internet and Happy Thanksgiving Eve! This week on Last Word SC Radio, Harvey and Matt get together to talk about the MLS Cup Playoffs. We recap the first round and look ahead to the MLS Conference Semifinals. In the Round Table, we predict results of the coming playoff games and discuss Bob Bradley joining Toronto FC and the disturbing NWSL news.

The guys don’t spend a lot of time talking Colorado Rapids vs. Portland Timbers because we’re recording the day before. If you want more content on that game, click here, here, and here.

Harvey Cruz is a staff writer at Last Word. He covers the New York Red Bulls. Born in New Jersey, where all the fun weather is at. Taylor ham or pork roll, he doesn’t care because it’s Bacon-Egg & Cheese for life. Your playoff heartbreaks don’t compare. But it’s okay, because you’ll likely never meet another Harvey in your life. Unique.