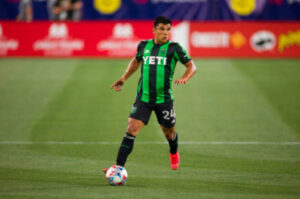 EDITORIAL – Nick Lima is a fierce competitor. Given that the 26-year-old has already racked up over 100 MLS appearances and represented the U.S. Men’s National Team on nine occasions, that seems like a bit of a redundant thing to say. But Lima’s competitiveness knows no bounds when it comes to sport. In his youth, he committed to every sport he could and excelled in most of them. That he is a professional athlete is probably unsurprising to those closest to him. That he chose soccer over other sports is more circumstantial. Austin FC fans are glad that he did.

Man On: With Austin FC’s Nick Lima Ahead of Home Opener Against his Former Team

LWOS: What are your earliest memories of playing soccer?

Lima: Playing on the sidelines at baseball games with my older brother, he’s about nine years older than me, and my best friend. My brothers played baseball most of the time and so we just picked up the lightest object on the sideline which happened to be a soccer ball. So, we started walking up kicking the ball, playing at two or three years old. That’s what we did before we had the capability to throw a baseball! I was just a bundle of energy, so I imagine it just looked like chaos, these kids struggling to stay on their feet!

LWOS: Combining baseball and soccer? So, were you a multi-sport athlete growing up?

Lima: I played every sport growing up. I played soccer, baseball, basketball, football, hockey, swimming, tennis, a little badminton…I just did everything!

LWOS: So, are you officially the most competitive player on the Austin FC roster?

Lima: That’s a big title to take! I am very competitive. I hate losing, I’ll tell you that much. Nothing gets under my skin more than losing.

LWOS: With that competitive of a spirit, and being involved in so many sports, how did you decide to pursue playing soccer professionally?

Lima: My dad, who had been my soccer coach, the values I got from him and what I wanted to strive for, I was still playing (American) football in high school and into college, but a good education was a part of it all. Being a professional athlete, a soccer player, that was all ancillary to the main goal. It was never like I knew I’d get to be a pro because you don’t know what’s going to happen. When I was deciding between football and soccer, though, as much as I loved playing football with my friends, I was like, ‘What would I love when my friends aren’t there, and the going is tough?’ I’d put a lot in to soccer, I’d been doing it my whole life, and it’s what I really loved. So, that was my decision, and I’m happy for it.

LWOS: As a modern-day fullback, you’re expected to contribute to the game both defensively and offensively. Which do you prefer?

Lima: I love the physical aspect of it, the dueling, going into 50/50 tackles, breaking up a play. Even a recovery run, the aerobic aspect of it. But, yeah, shooting, getting crosses in, grabbing a goal here and there, that’s definitely fun and a good feeling. I’ve definitely been looking for my first goal for Austin! So, yeah, all of it combined, being able to do all of it, I love it.

LWOS: You’ve been a part of the USMNT. Following their recent Concacaf Nations League success, what are your thoughts on the current team? And was that part of the draw of coming to Austin, knowing Josh Wolff and how he works and thinking a good season here might out you back in international selection contention?

Lima: Yeah, there’s obviously so many young talents on our team, and so many that are in the pool they’re coming up in a couple of years. We’re young, we’re talented, we’re fast, but I think we just had to show the grittiness and the hunger to win those two big games (Concacaf Nations League semi-final and final), and in this last tournament we definitely showcased that, in my opinion for the first time, so it was pretty awesome to see.  It’s a dangerous team going forward, an exciting team. I think this group is set up for success and I like that staff. Like you said, I’ve been there so I know that staff and think they’re really good. They’ve managed this group of players well. They’ve got some serious talent there!

Regarding me, I think they know what I can do. I want to continue to show and if they see fit with what my skill set brings, the physicality and everything else, if that’s what they need in their game and in the team then, yeah, they’ll see it each TV game and every other time.

LWOS: We’re talking as Austin FC prepares for its first home game of the season. What does it mean to the players to finally be at Q2, and what does it mean for you specifically with Austin’s opponents being your former club and hometown team, San Jose Earthquakes?

Lima: In the locker room, to be honest, there hasn’t been much talk about it. We’ve just been focused on each game as it comes. But, yeah, there’s excitement right under the surface for everyone. When it comes to the Quakes specifically, I know their weaknesses, I know what the players can do well. The coach has a unique approach, but I like him and the team a lot. They’re a very physical team and they have a lot of talent, too. But going against them in the first home game, I think it’s a little unfair to them! With the energy that I know is going to be generated, they’re going to be like, ‘What in the world?! Where was this energy when you were in San Jose?!’ It’s going to be ‘game on!’

LWOS: And what would it feel like to open your Austin FC goal scoring account in that match?

Lima: You’ll have to tell me what you think it felt like after I do it! It would blow the lid off the place!

The post Man On: With Austin FC’s Nick Lima appeared first on Last Word On Soccer.