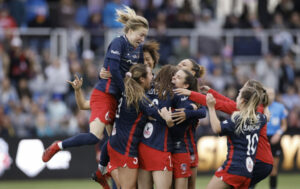 This isn’t your typical article or recap of the National Women’s Soccer League Championship, which was played this past weekend. Instead, I want to talk about a few things in particular: the Washington Spirit and the Chicago Red Stars — of course — but also about the city of Louisville, and what this year was for the league.

First off, let’s begin with the obvious and applaud the players. After almost every coach being fired this year, sexual and mental abuse scandals coming to light and all other types of blocks in the road, the players made it to the Championship. No, the league didn’t make it, but the players did.

For the Washington Spirit to step on the pitch after the crazy year they had off the field was inspiring. I was in Louisville, on a credential for The Equalizer doing photography at Lynn Family Stadium. I’ll get to that point later on. But, you couldn’t help but feel inspired seeing players like Andi Sullivan, Aubrey Bledsoe, Trinity Rodman — the sensational rookie — and others make their way on for warmups. It just felt like a relief for the players to even be there at the final.

The same goes for the Chicago Red Stars, who have battled so many injuries this year and off-the-field craziness of their own. Players worked through their emotions throughout the whole year in regard to the scandals, and just life. Danielle Colaprico, on Monday, posted some beautiful heartfelt words on her social media. Colaprico lost her dad last year, and she is still feeling the effects of his passing, a giant hole in her heart.

Emotion has certainly not be scarce this year.

Celebrating with your buds

The NWSL Final: A not-so-ordinary recap

The final itself was great. The game was entertaining — if you love chaos and didn’t watch the NWSL Championship, you can’t call yourself a member of Team Chaos. Chicago got on the board in first-half stoppage time, courtesy of Rachel Hill. When it comes to these two teams, Chicago is chock full of veterans. Washington is a young team. The second half could have been anyone’s game.

I was standing behind the goal when Chicago scored their first goal, and it was also right at the Washington supporters’ section — the Spirit Squadron — side. At the half, Washington goalkeeper coach Paul Crichton walked over to the Squadron and had one request.

“Be loud,” Crichton said. “We need you to be loud in the second half.”

Boy, you better believe it, they were loud. Nothing but love to the Spirit Squadron for giving me the best headache of my life with the pounding drum, the counting when Cassie Miller had the ball too long for Chicago and the endless cheering. I truly believe — and I’m sure the players will tell you this — that Washington comeback was lifted by their energy.

Washington got on the scoresheet in the 67th minute on a penalty kick taken by Andi Sullivan. The penalty was awarded after Tierna Davidson fouled Tara McKeown. And, in a moment where I took off my media hat for a second and put on my coaching hat — I am in my eighth year of coaching basketball, so I know how to argue with officials — I pointed at the spot and yelled, “Foul!” Hopefully the CBS microphone didn’t pick it up. Whoops!

After scoring, Sullivan dropped down on one knee and fist-pumped, screaming and being tackled by her teammates. The final, in a pure moment of chaos, went to extra time, but not penalty kicks. Trinity Rodman lofted a ball in the 97th minute in the box, and Kelley O’Hara jumped up and headed it in, seemingly shocking herself.

With that, the Washington Spirit became the 2021 NWSL Champions.

Congratulations to the Washington Spirit on winning your first-ever NWSL championship. Despite a year with no shortage of challenges, you’ve made the District and your country very proud.

A word on the Washington Spirit and their year

The Washington Spirit… had a year.

It was so hard to be a neutral in this game and actually feel like a neutral. A part of me wanted Washington to win all along, simply for the players. For a moment, when the players lifted the trophy, hugged their families and partied in the locker room, it didn’t feel like there were issues with Steve Baldwin, former coach Richie Burke or anything. There was just this moment of happiness. Of course, the Washington Spirit players know that their organization needs to be better — and they have demanded all season for it to be better (namely in the hands of Y. Michele Kang).

You can’t help but applaud the work that Kris Ward did, either. The Championship was actually his and Aubrey Bledsoe’s birthday. For a second, when the Squadron sang happy birthday to him before the game, it looked like he was going to shed a tear.

Ward took an impossible job and made it possible to lift a trophy. He inherited a locker room that was struggling in games and dealing with emotions after years of emotional abuse from Burke and ownership chaos with Baldwin. Instead of just barely getting by, Washington thrived. The Spirit not only won the Final, but they finished the regular-season with class, losing once in the last 10 matches.

And then you look at the players, who penned a message telling their owner to step down in the middle of the season, who dealt with abuse and who could have completely given up on the season and the club. But, those players turned it around and put a star above Washington’s crest. Andi Sullivan, who is all D.C. all the way, is not just a leader on the field, but off as well. Rodman isn’t just going to be a rookie sensation; she could very well be the next national team face.

Washington is in good hands for the years to come on the player side. Now, it’s up to Baldwin to make good on his promise.

I’ll have a lot more coming, but here are a few favorites. Thankful to @JeffKassouf and @EqualizerSoccer for the opportunity to attend my second final, and first as a photographer. What a day!

Listen, I don’t say that about any city except for my mighty Pittsburgh, Pa. However, Louisville was a dream. Not only did the crew at Lynn Family Stadium and Racing Louisville rush, on a very short notice, to make this NWSL Final work, but they did extremely well. Louisville’s stadium was popping, with the attendance being over 10,000 fans.

They treated media well and, in the two short years I’ve been a soccer photographer, Louisville is my favorite stadium to shoot in, without a doubt. I didn’t have to worry about standing and blocking someone’s view. The section to photograph in is definitely the supporters’ side — where the Lavender Legion usually is for Racing games.

Louisville is going to host more big games in its future, I can promise you that.

For now, it’s officially the offseason. Deals have already been made, a coach stepped down with the release coming at 1 a.m. EST and chaos is in full swing. Sit back, relax and get ready for the Expansion Draft.